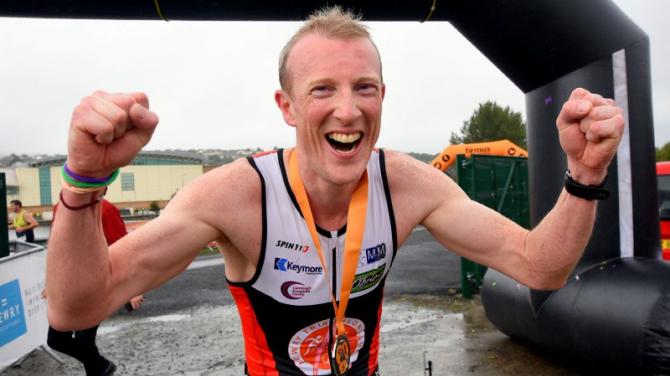 FINBAR McGrady retained his Newry Triathlon title in stunning fashion. The big doctor, a winner last year, was so impressive as he won Sunday’s Firmus Energy Newry Triathlon with well over two minutes to spare.

And indeed there were several other reasons why the Loughbrickland man, a member of the Newry Triathlon Club, should be delighted with his performance over a new course. Just 24 hours previously Finbar had the race of his life as he gave everything to edge out three teak-tough rivals to take the top spot in Olympia’s Castlewellan Triathlon. Plus he had a fall from his bike on Sunday – and he still managed to cruise to victory.

That’s three wins on the spin for the man who is a rock musician in his spare time (if he has any). And just a few weeks ago he also won a European bronze. Last year the big man won six triathlons in a row which poses the question: Is Finbar McGrady the most successful ever Newry Triathlon Club member? Step aside Kookie O’Hagan. Step aside Padraig Lynch. Step aside Martin Patterson.

Meanwhile Coleraine’s Ann Paul was the winner of the ladies race in 1.09.23 with Ventoux’s Sheena Dullaghan second in 1.11.07 and Newry Tri Club’s popular Maria Byrne third in 1.13.34.

This was the sixth running of the event, undoubtedly the fastest sprint triathlon in the nation, but this year it was staged in the toughest weather conditions yet. High winds and rain faced the 122 brave triathletes who plunged into the Basin at Dromalane (over 30 others registered online but never made the start as they were were obviously freaked out by the unseasonable weather) but race director Shane McCourt’s marvellous attention to detail ensured there would be no causalities – apart from a few minor spills.

“And I would like to thank everyone for coming, especially the athletes themselves, the marshals, the Shamrocks GAA club (who oversaw the bike route) Newry Business Improvement District (BID), Camlough Lake Water Festival team, the Newry, Mourne and Down District Council and and of course the Newry Triathlon Club. Also a special thanks to our main sponsors Firmus Energy (with Angeline Murphy), plus Synge and Byrne (Adrian Garvey) for the food. Another two people who did a great job were Dessie McMahon and Rodney O’Hare who looked after the temporary bridge across the Basin.”

As well as the main individuals there were relay teams with Barry Loughran’s trio winning the overall team prize in 1.07.28. Tara’s Team were second in 1.10.13 while Katie Magill (with Ethan Patterson) were third in 1.10.53.