Charting the history of Irish triathlon 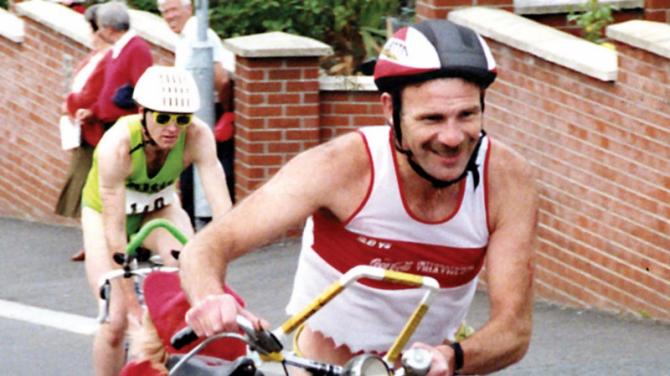 NEWRY'S very own Ironman Tony Bagnall, has conquered one of the biggest challenges he has ever faced – writing a book!

'The Irish Triathlete – a history of Triathlon in Ireland', which has both been written and produced by the former Newry Democrat Sports Editor, is packed with articles and pictures from the start of triathlon in Ireland (1982) to the present day.

The book has taken Tony one year to complete and during that time the popular athlete has spoken to various sports men and women he met throughout his years in the triathlon scene.

Admitting he was never more than an average swimmer, runner or cyclist, Tony loved the sport and during his years involved he met lots of super people, competed against some marvellous athletes and visited some memorable places.

Discussing how he put the book together, the 73-year-old explained that he has been a member of the Irish Triathlete Association since its inception and still holds the records from their very first meeting in 1982.

“Triathlon Ireland haven't got any of those details but I had all the paperwork,” the Newry Triathlon Club member said.

“Every time I completed an Ironman I would have wrote a story so I thought I would put a book together looking at my own history for my own benefit and my family's benefit.

“I then thought I would add in different people. There's a fair bit about me in it, which I'm not overly happy about, but there's also a fair bit about other top triathletes and it tells the story of triathlons in the early days that no one else has recorded or no one knows anything about.”

Tony tells the stories of his Ironman races, while there are also individual profiles on the likes of Owen Martin, Martin Patterson and former Portadown professional triathlete Conor Murphy.

The book catalogues not only Tony's triathlon career, but the careers of various other personalities in the sport and he hopes it makes for interesting reading.

“It was hard work but I really enjoyed it,” Tony added.

“There's a guy I know called Gerry McAnuff and Gerry said to me that he knew a guy who started doing a book about my age and he died before he finished it.

“I was conscious of trying to get this done before I die!” he joked.

Tony added some humorous stories to brighten and lighten things up, such as Pete the Nearly Elite Triathlete. His adventures – or should that be calamities – were carried in the Triathlon Ireland magazine during the eighties.

The Irish Triathlete is a unique history of triathlon in Ireland, informative and intriguing and a must-read for anyone with an interest in the sport.

The book, comprising 80 A4 pages, costs £13 and is currently on sale at Ventoux Cycling studios and Infinity Swim Academy on the Newry/Camlough Road. Or indeed you can purchase a copy from the Democrat office.