Bitter heartbreak for Down 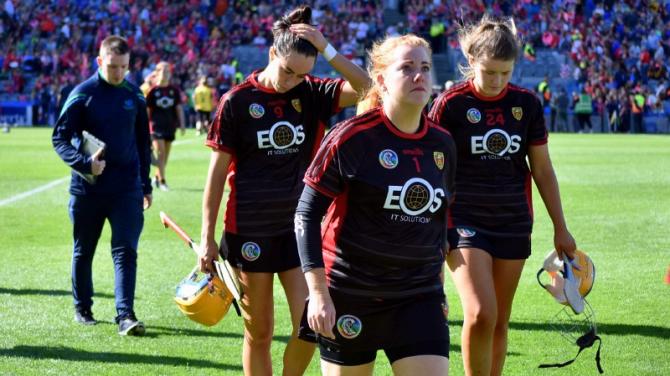 DOWN camogs suffered All-Ireland Final heartache but can have no regrets with how they performance on the biggest stage.

Caitrona Collins’ goal on 40 minutes gave the Rebels a commanding 1-10 to 0-07 lead and Down’s hopes of a late comeback were scuppered with the disgraceful sending off of Sara-Louise Carr.

The Clonduff player was having a stormer and had no-where else to go other than into the Cork player who blocked her run and the referee awarded a free out and gave Carr her second yellow card.

Down never threw in the towel but with 14 players they weren’t going to overcome a seven-point lead.

It seemed what could go wrong did and manager Tina Rooney was rightly aggrieved after the game.

“Overall I thought we had to work harder for our frees and we didn't get many but they had 19 over the hour,” said Rooney.

“I believed at half-time we could come back as we had come back from worse deficits, we drew level and then they seemed to get a run of frees in shooting range or further out on the pitch and that upset us.”

“When we get a chance to look back on the game, on the year, we will realise that Down camogie has achieved a lot.

“But today all we have is the bitter taste of defeat in Croke Park and that just overwhelms you.”

Not for the first time this season, manager Rooney opted to play captain Fionnuala Carr up forward with top scorer Niamh Mallon hovering award the middle, but injury to Dearbhala Magee forced a rethink and Carr moved back.

Played at GAA Headquarters in front of a large and noisy Down support on Sunday, Sara Louise Carr got the ball rolling when she slotted over a magnificent point in the second minute after making a bustling run and a minute later Dearbhala Sands doubled the lead with a cool finish after Aimee McAleeenan had made a great run.

But Cork got off the mark with Player of the Match Saoirse McCarthy picking off her first of five points and with eight minutes played the sides were level with McCarthy again the scorer.

Down were courageous busting forward, hunted in packs and were strong in the tackles but they seemed to have to work much harder than Cork to win any frees.

The busy Niamh Mallon converted a free to nose Down ahead again but the Mourne girls suffered a blow when the brave Dearbhala Magee had to go off with blood streaming down her face – and Orla Gribben came on as a blood-sub.

Mallon then steered over a fantastic 60-metre free and the hard working Paula O’Hagan chipped over a great point and with 16 minutes played Down were 0-05 to 0-02 ahead and on top, or so it seemed.

Caitrona Collins sparked the Cork comeback with a point and she, McCarthy and Caroline Sugrue rattled over points to leave Down trailing 0-5 to 0-7 at the break.

Like the first half Down started the second brightly and within five minutes the sides were level with Mallon (free) and a super Saoirse Sands point after Sara-Louise delivered the perfect pass.

But Cork eased their way back in front with a few questionable frees awarded against Down and Collins converted her fourth and fifth points to stretch the lead. Sugrue put three between the teams and then came Collins’ goal.

Siobhan Hutchinson played a clever defence splitting pass to pick out the impressive Fionnuala Neville and she slipped the ball to Collins who fired home at the near post.

It was difficult to see how Down could come back but given that they had come from behind to win their first Ulster title in over 20 years only months ago, as well as overcame Laois in the quarter-finals, you knew they would make a convincing charge.

Mallon’s tight angled free drifted wide and Saoirse Sands’ effort went the wrong side of the posts but still the Mourne girls were creating chances.

Collins struck another point to bring her tally to 1-06 before that shocking sending off ended Down’s hope.

The Mourne girls needed Sara-Louise’s drive and pin-point passing in those final minutes if they were to have any chance but she and her team-mates were robbed of that chance due to the the poor decision by the referee.

Fionnuala Carr’s 50-metre free on 51 minutes was Down’s last score of the game while McCarthy and substitute Celina Healy (free) hit back for the Rebels to secure their Intermediate All-Ireland title at the third time of asking.

While of course victory would have been the perfect ending to what has been a fairy-tale journey for this Down team, to have got as far as they did, especially given the early season upheaval, speaks volumes for the players, management team and county set-up.

The level of support around the county in towns and villages shows that people in this area recognise what an achievement it was just to reach the final.

This fairytale didn't have a happy ending but this group of women have given everything and it is something their county can be proud of. It is vital they don’t lose momentum gained when the new season starts next year.

But first comes the Club Championships.