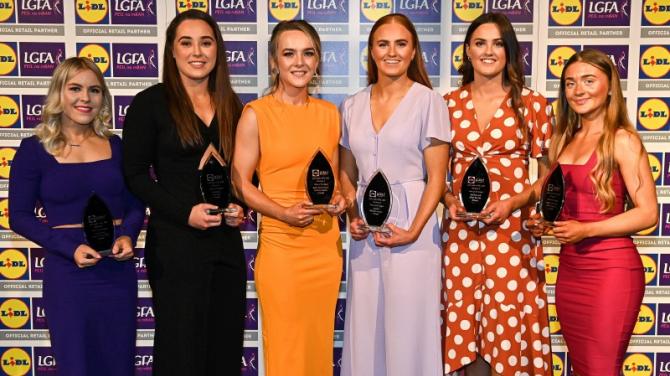 HALF a dozen of the Armagh team beaten by Kerry in last month’s Division Two final were back in Croke Park last Friday evening to be honoured at the LGFA’s National League awards, writes Richard Bullick.

Six representatives each from the Kingdom and Orchard were included in the Team of Division Two, which was rounded out by a couple of Monaghan players and Mo Nerney from the fourth semi-finalist Laois.

Blaithin Mackin and Catherine Marley are following in the footsteps of older siblings by being included in a Team of the League, while the other first-timers from Armagh are goalkeeper Anna Carr and young corner back Grace Ferguson.

Aimee Mackin, who captained the team during this season’s National League in the absence of injured skipper Kelly Mallon, picked up her fifth award while this was a second gong for the prolific forward’s fellow 2021 All Star nominee Lauren McConville.

Crossmaglen’s McConville was included at right half forward when the orangewomen won the Division Two title in 2015, a decade after first earning promotion to the National League’s top flight, but this time got the nod as a converted centre half back.

The iconic Caroline O’Hanlon still leads the way with eight inclusions in Team of the League selections, having featured in each of the first seven seasons since the concept came in back in 2009, though she hasn’t been honoured since 2017.

That is more a reflection on her heavy British SuperLeague netball commitments over the past five years than any decline on the part of Armagh’s greatest ever female footballer, but it remains a remarkable record.

Up until this new batch of winners was announced last week, O’Hanlon had accounted for eight of the 28 slots her county had ever secured, though Aimee Mackin could overhaul her tally in the years ahead.

The Camlough girl, who just turned 25 recently, was honoured in each of her first three full Orchard campaigns from 2015 to 2017 before being the sole Orchard representative in the Division Two line-up three seasons ago.

This time round, Aimee is accompanied by younger sibling Blaithin, who had a number of eye-catching performances in midfield for Armagh, who beat all three Ulster rivals to top the northern regional group before obliterating Laois in a one-sided semi-final.

Catherine Marley, Armagh’s joint Player of the Year for 2020, would likely have picked up Player of the Match for her very impressive performance in Croke Park had the Orchard held on for victory so the Lissummon star’s inclusion is richly deserved.

Her oldest sister Caoimhe was allocated the No 2 jersey in the 2010 Team of Division Two and picked at full back in the Division Three selection four years later, while another sibling Sarah earned the right corner back berth in the second division side of 2018.

The third Marley sister, Niamh, might have been in contention too this spring after a Player of the Match performance against Cavan and raising two white flags in the same game twice, but Blaithin Mackin taking up a midfield position wouldn’t have helped her chances.

Having been beaten in the final, Armagh can’t complain about being given as many places in the line-up as title winners Kerry but All Star full back Clodagh McCambridge and Aoife McCoy, who was in the Team of Division Two in 2018, must also have been in the frame.

Aimee Mackin is flanked in the full forward line by Nerney of Laois and Kerry’s own prolific forward Louise Ni Mhuircheartaigh, the highest profile of the half dozen representatives from the victorious Kingdom outfit.

Working backwards, Kerry skipper Anna Galvin is at left half forward, with Lorraine Scanlon in midfield and Aisling O’Connell wearing the No 5 jersey, with Ferguson joined in the last line of defence by full back Kayleigh Cronin and Cait Lynch.

Monaghan, who only lost by three points to Kerry in the semi-final in spite of being a team in transition, have two representatives in new captain Muireann Atkinson at centre half forward and Rosemary Courtney at left wing back.

Meath were rewarded for winning their first ever National League title with the inclusion of seven Royals in the Team of Division One, including skipper Shauna Ennis in the No 7 shirt and All Ireland Player of the Year Vikki Wall at right half forward.

There are a total of 17 Ulster representatives across the four Teams of the League with Glentoran soccer captain Jessica Foy, a Northern Ireland international, and Natasha Ferris flying the flag for Down among the Division Three forwards.

James Daly and Caoimhe Morgan’s Fermanagh missed out on a place in the Division Four final but full back Molly McGloin along with star forwards Blaithin Bogue and Eimear Smyth were recognised at Friday’s Dublin bash.