Excursions to Warrenpoint in the Summer of 1924 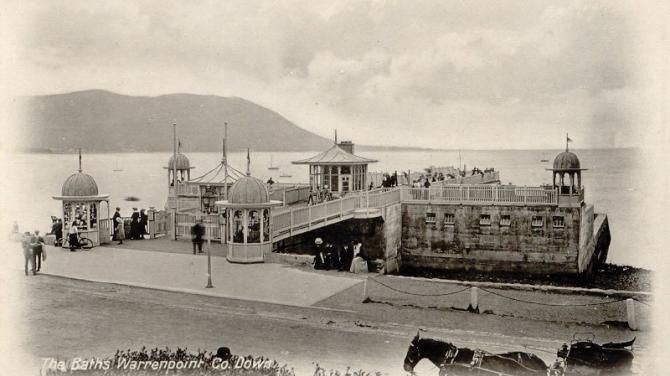 ONE of the most unique and interesting documents on display in Newry and Mourne Museum’s current temporary exhibition on the history of the Newry and Warrenpoint Railway is a list of excursions to Warrenpoint in the summer of 1924.

The document is from the Museum’s Reside Collection and is amongst papers relating to the Irish Boundary Commission.

The document, which was compiled by the Great Northern Railway (Ireland) (GNRI), provides details of excursion traffic from April 27, until September 28, 1924. Details comprise the date of each excursion, name of party, the station from which they travelled and the number in each party. A total of 39,145 persons travelled to Warrenpoint on the GNRI line during this period.

Apart of from the evident popularity of Warrenpoint as an excursion destination for annual outings or trips, this document enables us to make a number of observations about excursion traffic to Warrenpoint in the mid 1920s.

‘Excursion Sundays’ were always popular during the days of the railway in Warrenpoint and this was no less true in 1924.

For instance on Sunday, June 22, 1,400 members of AOH Division 45 made the trip from Belfast. On the following Sunday groups from St. Vincent de Paul (Armagh and Lisburn), St. Matthew’s Confraternities (Belfast) visited the town with a combined total of 2,213. The St. Vincent de Paul in Armagh made further trips in July, August and September.

The following day 1,796 came from St. Mark’s Sunday School in Portadown and, on June 27, the Parish Church in Lurgan brought 1,952 persons.

Employees from businesses and factories also made Warrenpoint the destination for their annual outing. These include the Head Office Staff from the Belfast and County Down Railway, Newforth Weaving Company (Belfast), Irish Life and General Insurance Company from Dublin, York Street Flax Spinning Company and the Royal Hippodrome Theatre, both in Belfast.

In 1924, the Twelfth Demonstration for Orange Lodges in the Leitrim, Ballyward, Ballyroney and Katesbridge areas appears to have been held in Warrenpoint as 1,178 people travelled from these areas to the town. On August 15, 2,424 people departed from Dublin Bridge Station in Newry to celebrate the day in Warrenpoint.

The bulk of excursion traffic travelling to Warrenpoint came from railway stations in County Armagh and west County Down. As well as Belfast, groups made the trip from south County Antrim and County Tyrone and from as far afield as Derry and Dublin.

The total of 39,145 persons travelling on the Newry to Warrenpoint Railway during these months is probably only a percentage of those groups which visited Warrenpoint during the summer of 1924. However, this document illustrates the huge popularity of Warrenpoint as a seaside resort which the railway made possible for large numbers of people.

A new temporary exhibition, An Excursion into the History of the Newry and Warrenpoint Railway, exploring the history of the railway through objects, documents and photographs, is on display at Newry and Mourne Museum until 26th August 2019. For further details please phone 028 3031 3182 or 3031 3177.

Newry and Mourne Museum is open to the public seven days a week with admission free of charge. For opening hours, information on events and exhibitions, other services and bookings please phone 028 3031 3178 or visit www.bagenalscastle.com.