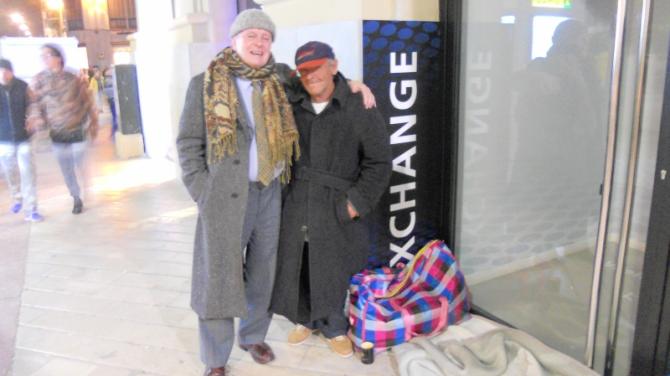 RIGHT dear friends, let’s make this a kind of detective story, an effort to discover the lineage and history of the black, Cashmere woollen overcoat that I bought for £15 out of the window of the Cancer Charity Shop that looks across Hill Street to the library.

On the day in question I was in that scholarly establishment, completely engaged in my writing when, out of the blue and taking me by surprise, a tap on the shoulder and there he was, Chris Cassidy, a library doyen of all matters ancestral, historical and cultural….that’s Chris.

“Rowan, there’s a coat over the street in the charity shop. It’s exactly the kind of coat that you would like.”

So off I went with many thanks to Chris for he was right and I made this magnificent garment my own, for fifteen pounds!

New, the cost would have been the best part of three hundred and there it was, my special bargain, fitting into my philosophy of buying all my clothes, shirts, jumpers, coats and the like, from charity shops, my favourite among them the Saint Vincent de Paul on Mill Street. This coat was as new and, I thought, would see me from the Hill Street window to the grave and might well wrap me up for the next leg of my voyage to the stars.

The coat was long, strong, heavy and tightly enough woven to take on the appearance and the feel of felt! What a coat! And how happy I was to be wearing it!

So this is the first strand of my detective journey. I want to make contact with the person whose coat this was, who left it into the charity shop on Hill Street opposite the library, and whose gesture would bring warmth and security to Manolo, an old homeless man on the wet and cold streets of Magala in November, the city’s worst weather of the year. My purchase of the coat from the cancer shop would have happened in spring or early summer of this year.

So, perhaps the donor of a shop staff member might recall.

When you are next in Malaga go take wine, coffee, a beer maybe, at Cafeteria Plaza on Plaza de la Marina. Tell them you are from Ireland and that you know me. You will be well-received.

And it was there in Cafeteria Plaza that we met Manolo.

Antonio and Carlos two of the waiters there would tell me his name.

“It is Manuel…but to friends it is Manolo.”

The night in early November was particularly cold and the rain had started to drizzle down.

Manolo had finished his search for cardboard boxes that would be his bedding in a doorway for the night.

He was huddled on the door step outside the cafeteria and this would be his waiting time. You see, in Malaga, it is best for the man who will sleep rough to fill in the time and not bed-down too soon. The night can be long and hard and when there is conversation, a chat, quietly holding his begging cup, it helps the broken man. And people do chat, do give alms into the cup and, sometimes, Manolo’s food for the night is brought out to him.

We have made a friend of Manolo and as I look out to him from our place of restaurant comfort under the cafeteria awning, I see it, frozen in the moment.

Manolo’s slight frame draws in on itself, his knees are pulled up to his shallow chest, his arms wrap around the knees and, in that frozen moment, he pulls the physical entirety of his being, as tightly as possible, to cut down on the surface area exposed to the cold night air.

And that was what did it.

That moment in time of Manolo huddling himself down to keep the cold at bay, cut deeply into my consciousness and I made my approach.

He had no idea of what was about to happen but that night, and in the nights of winter to come, Manolo would be warm and dry, not a lot maybe, but sufficient to stave off the fangs of winter’s worst.

“Please Manolo will you accept a gift from me?” And he held out his begging cup in expectation.

I asked him to stand up and placed my wonderful coat around his shoulders and body, tied the belt tightly around the waist, and saw, immediately, that this was the perfect garment, a wonderful present for Manolo, to help him cope with the weather to come. There was warmth and happiness in his eyes and dancing in his feet. A good thing had happened.

There’s a beautiful twist in the end of the tale. I am left in my Donegal Tweed suit. It is heavy and weather resistant. I am comfortable.

And then it struck me. This suit of Donegal cloth was given to me on Hill Street in Newry, along with a Donegal tweed overcoat, given as a present, by my dear friends Larry and Philomena Guiney, good and decent people.

We are all, I mused, jewels in the crown of life, angels in hob nail boots doing things for God.