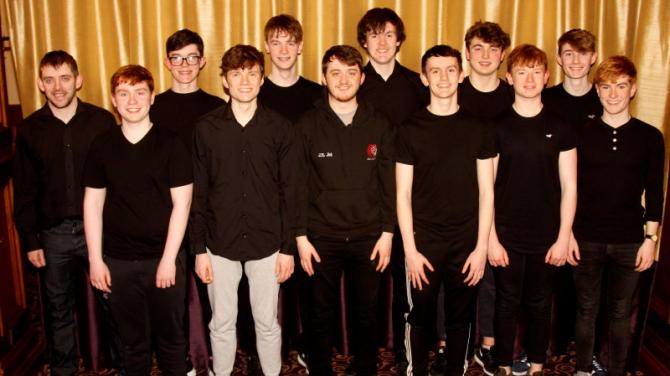 Gladys McCague, PRO of Newry Musical Society, told The Democrat that the mood and morale amongst cast and crew is at an all-time high as they fine-tune the production in the last couple of weeks of rehearsals.

She said: “Rehearsals are going really well, we have it all set at the minute and it's starting to come into shape. It's going to be a good show I have to say.

“We've been rehearsing now since November and we started the musical rehearsals from before Christmas and got the music prepared. We took a wee break over Christmas and have been back from the second week of January.”

Gladys believes that the alchemy of the three lead parts in Jesus Christ Superstar - Jesus, Judas and Mary Magdeline - are pivotal to the production running smoothly, and she said that the interplay between the three parts in rehearsals has been excellent.

She added, “We hold open audition which meant anyone could turn up. This year we have three people in our leads who are new to the society.

“The three leads knew each other from previous productions but they have blended in well here with the musical society. In fact Jordan Walsh is the youngest director ever to work in the Opera House, he's directing Footloose. Anne-Marie Morgan is directing both our show and Footloose in the Opera House.”

Directed by Newry Musical veteran David Cunningham, a man with over 40+ years experience in musical theatre, Gladys believes that teamwork is paramount to the success of any production.

She commented, “We're all working as a team because it's the only way it works. It's lot of hard work and it's not just the people you see on stage – the people you don't see are doing maybe more work than the people on stage.

“We have a musical director in Danny O'Neill who is in a class of his own and our choreographer, Anne-Marie Morgan, is doing a fabulous job - she's a very talented lady.”

Gladys says that the production is the culmination of a lot of hard work and teamwork from a cavalcade of volunteers who work tirelessly to make it happen.

“We have a stage crew, people doing our sets, and they're all working away behind the scenes. Then it all comes together the week before we all move into the Town Hall. Everyone on stage and the backstage crew is voluntary.”

For Gladys, musical theatre is a passion that has seen her forge lifelong friendships and create indelibly etched memories throughout her tenure with the society.

Gladys explained, “I'm with the society 46 years and my dad, Wesley, is our President. He is 93 and has been in the society from 1946.

“The society was formed in 1945, and he joined the following year and he's still there, so it's just something that's in the blood.

“You're making friends as you're learning the music and it's a team of people enjoying their music and friendship. It just draws you back every year and I have lifelong friends from there.

“It's quite a family thing too because I have two girls and they both grew up on the stage between Newry Musical Society, Bosco, Newpoint, and both of them now work in professional theatre,” she said.