Leah's Derry excited to bring Jenny back for second series 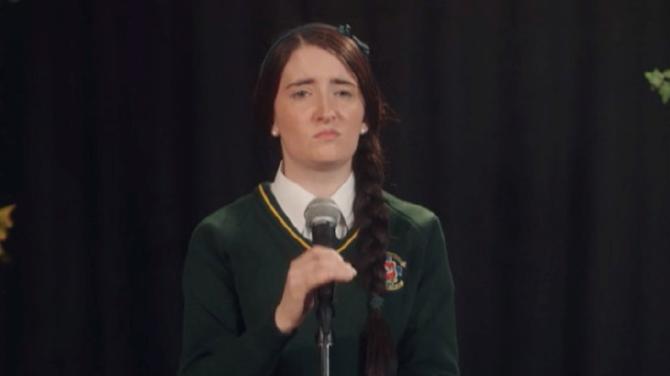 Tonight (Tuesday) sees the return of the smash-hit comedy and the Newry Democrat caught up with Leah, who plays prim-and-proper prefect swot Jenny Joyce.

The runaway success of the first series meant that commissioning a second season of the rip-roaring sitcom was a no-brainer for Channel 4, however Leah told me that even the cast and crew were surprised by the scale and speed of the show's meteoric success when it first burst onto our screens last year.

She said, “The writer herself was saying that we expected a small, dedicated fan base but we didn't expect the viewing figures that we got for it, it was a big shock but it was also a huge relief as well.”

Being catapulted into national fame comes with a certain pressure of expectation and Leah said that this had upsides and downsides during shooting for series two.

“In ways it was easier because we knew that people enjoyed the show whereas when we first started we weren't sure if people would like our characters and get them,” added Leah.

“So in ways there was less pressure, but then there was more pressure in ways because people liked the first series and we really hoped that they would like the second season as well.”

Leah said that any fears that she might have had that season two wouldn't live up to the first one were allayed as soon as she received the script for tonight's opening episode.

“It definitely did live up to expectations. When I read it I was laughing out loud again like I was for the first one, which I knew was a good sign.

“When I read what was in store for my character I got really excited, I couldn't wait to film it. There's a few new characters so I was really excited to see who they would cast and to meet them.”

Filmed on location in Derry at the end of last year, the London-based actress said that reprising her role as the geeky Jenny Joyce became like an extended busman's holiday, such is the camaraderie and laughter on set.

She said, “Filming went really well. It's all great fun because, for me, it never really feels like work.

“Because I'm in London I also get to come home as well so I just have a really good time because I'm only filming for a few days in the week.

“The other days I get to spend it with my family and friends because I'm not a main character. It honestly doesn't feel like working and it's just good fun and there's always a lot of laughs on set.

“I have it lucky because some of the main girls are in every day, doing 12-hour days, whereas I dip in and out,” said the actress.

Leah said that meeting and having a drink with Tommy Tiernan was one of her favourite memories of the whole filming experience.

She explained, “We were filming in Derry and all of the cast were put up in a hotel in Derry. Tommy was down for that, so I did have a drink with him and a few of the other cast members in the bar.

She attended last week's Derry premiere of the series along with her mother, Jackie, and Leah is confident that fans of the show will lap up the second series after it received the much coveted seal of approval from her mum.

“I don't think people will be disappointed, I really hope they're not,” she said.

“The first episode is one of my favourites. My mum came with me to the premiere in Derry and she really liked it as well. She thought it was very funny, so I'm keeping my fingers crossed that people like it.”