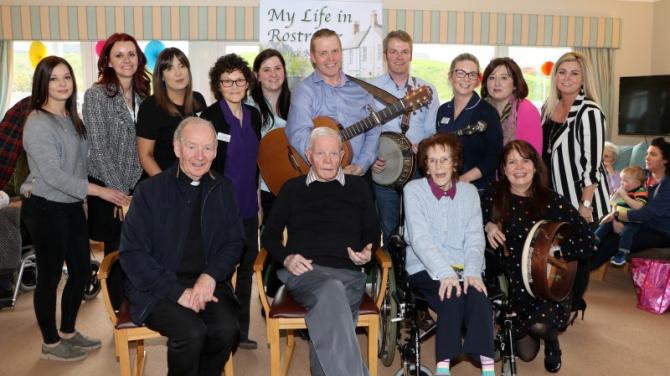 LAST Wednesday I had the pleasure of attending a book launch with a difference as local writer Alice Kelly released her latest collection, 'My Life in Rostrevor'.

Launched in Carlingford Lodge Care home in front of friends, family and with local and national media in tow, it's fair to say that the 86-year-old Rostrevor writer's evocative anthology of poems and short stories is a real labour of love for Alice and her daughter Bronagh.

Compiled lovingly by Bronagh from old manuscripts and poems she discovered in the Kelly family home, 'My Life in Rostrevor' transports you back to a bygone epoch in Ireland through it's vivid imagery, warmth, sincerity and quality of the Mrs Kelly's narration throughout each poem and story.

“I went back to our home in Rostrevor and spied poems by the side of the couch and knew I hadn't read these. From that wee tiny bundle the book was born,” said Bronagh.

“Then I was like Inspector Clouseau because then I started looking in the house for more. Then my daughter said that she was sure that she had a USB with more of mummy's poems on it. So, finding that USB stick was a mission.

“'My Life in Rostrevor' is just mummy's whole life story there and when I came across the poem about Sunday's in the Kelly house, it actually takes a tear to my eye and gives me a lump in my throat every time I think about it.

“It relates to every family because the children grow up. In the last line she mentions where we all get married to our prospective partners and there's a line in it: 'Sunday's in the Kelly House will never be the same...' and that just hits me because every house is the same.”

Mrs Kelly's poems reflect the entire spectrum of life: joy, happiness, laughter and tragedy, heartbreak and pathos, seamlessly interweaving the the entire gamut of human emotion refracted through the unique kaleidoscope of her life and her pen.

Talking about where she she derives inspiration from, Alice said that her storytelling capacity and musicality came from her late mother, Maimie: “I get ideas from many places, but it could come in poetry or a story because I love both of them.” said Alice.

“My mummy was a writer and great singer singing in the church every Sunday. She was a soprano and she used to teach us wee songs on the accordion and the piano.”

In the beginning writing was a furtive, secret hobby Alice used to be a little embarrassed about.

She said: “I used to write at the top step of the stairs when I was younger and hide it if somebody would come through the door and ask me something. I pretended that I was doing something on the floor or something.”

Alice loved the poetry of Seamus Heaney and was privileged enough to meet the Bard of Bellaghy, who offered her some kind words of advice: “He was good to me and it gave me confidence. You need confidence to do it.”

“Seamus told mummy to mummy to keep on writing the poems,” said Bronagh.

At the event, Bronagh gave a powerful recitation of the evocative, moving and poignant 'My Life in Rostrevor' where you could have heard a pin drop.

Bronagh said that the Kelly house was a real cornucopia of creativity growing up, with Alice as its centrifugal force.

She said, “Mummy used to teach us the accordion, the piano and the guitar growing up.

“Mummy used to ask us 'What do you think of this line? Does that go with that? And nine times out of 10 it was. Mummy was very open to criticism, but normally you didn't have to change anything.

“And really, because mummy was forever writing poems, they'd have been at the side of the couch and the side of the bed, we would keep saying 'Mummy, why don't you get your poems published?', but she was very humble about it.”