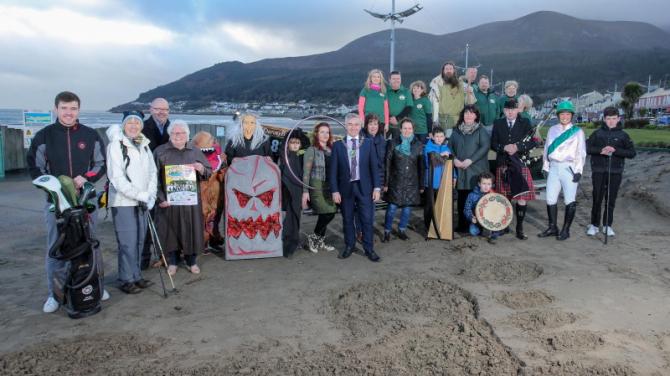 NEWRY, Mourne and Down District Council’s (NMDC) Giant Adventures festivals, and other events, all return this summer with enchanted vigour, building and drawing on the success of previous years.

Kicking off the first of the Giant Adventure events is the award-winning Footsteps in the Forest, which takes place on June 1 and 2.

This event has grown in popularity with families since 2016 and offers an unforgettable experience as intriguing characters enchant and delight visitors on a journey through Slieve Gullion Forest Park.

Based in Newcastle, the Festival will offer walkers of all levels of fitness stunning routes in the Mourne Mountains and surrounding countryside.

There are several routes to choose from featuring a variety of self-guided lowland walks including more strenuous mountain climbs ranging in distance from 10km to 40km.

In a district famed for its fabulous golf courses, the Newry, Mourne and Down Junior Summer Golf Trophy returns from August 14 to 16 for boys and girls under the age of 18.

The top 20 overall gross score from the qualifying tournaments, which will take place in Kilkeel and Warrenpoint Golf Clubs on August 14 and 15, will play the championship course at the world famous Royal County Down on Friday, August 16.

Wake the Giant is back on August 24 and 25 in Warrenpoint and is the last of this year’s Giant Adventure festivals.

Visitors and locals will be treated to a new twist in the tale to wake the impressive 32-foot giant, Finn, assisted by a merry band of acrobats, drummers, sprites and fairies.

Bringing the summer events to a dramatic and colourful close is the Pride in Newry – UK and Ireland Pride 2019 festival, which will see a week of local events lead up to a spectacular Festival parade on Saturday, August 31.

NMDC Chairman, Councillor Mark Murnin said: “The Council’s ambition to be one of the premier tourism destinations in Ireland is supported through investment in a varied events programme that offers an array of different attractions, from family fun to outdoor activities, ensuring choice for every person and pocket.

“The development of the Giant Adventure events since their inception in 2016 has seen a marked increase in visitors to Newry, Mourne and Down, which has had a positive economic impact on our local economy.

“Additional summer events organised by other groups and communities also add vibrancy and value to our own Council-run activities, all of which enhance the visitor experience.”

Other summer events happening throughout the district will include the Mourne Way Marathon in Rostrevor on June 8, the GI Jive Festival, Kilkeel, from July 23 to 28, the Reiver’s Festival, Kilkeel, from June 28 to July 11, the Fiddler’s Green Music Festival, Rostrevor, from July 22 to 29, Camlough Lake Water Festival from June 1 to 2, Newry City Triathlon and Festival of Water on August 25, in Newry and the Iúr Cinn Fleadh, Newry, from September 5-8.

The Maiden of the Mournes festival celebrates its 30th anniversary this year from August 11 to 18, and by way of celebration, the event promises to be even bigger and better.

Check out the council's website regularly for more details of events closer to the time.