Couples pull on their dancing shoes for Silverbridge 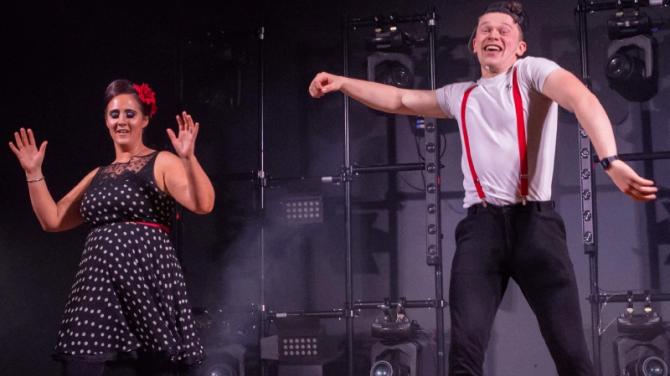 In November 2018, a random group of individuals, many unknown to each other, came together in response to the ‘jigs and reels challenge’.

As the names were drawn out of a hat, 14 dancing partnerships were formed and over the past number of months each couple developed a unique dance routine under the tutelage of various mentors and dance tutors (Aíne Mallie, Louise Rafferty, Shea Bradley, Jayne Hearty, Gareth O’Connor, Kerri Boyle, Ryan McKeown, Alannah Grant & Aoibhoinn O’Hagan) some of whom performed a special dance routine at the end of the show.

In a packed Silverbridge Resource Centre, the winners of Silverbridge Harps first ever ‘Jigs and Reels’ Teresa Boyle and Paddy Hughes, opened the 2019 event by returning their tiara and belt won back in 2008.

The 14 couples then followed with their own special routines – their sheer hard work and countless hours of rehearsals were clearly evident – and what a superb evening of entertainment!

Adjudicators Joe Brolly, Ronan Lynch, Paddy Begley, Allsun Kelly and Noreen Convery were hugely complimentary of the creativity, variety, skill and entertainment value on show. With so much to consider, it was clearly a very complex task to choose an overall winner, however, based on the narrowest of margins, the eventual winners were announced: Gavin Burns and Tara Nitsch.

Event main sponsor Brendan Garvey and his son Jack presented the winners with a gift voucher for Garvey’s Bar and Restaurant and a weekend break in Trim Castle. Joe Brolly also presented the dance tutors and members of the organising committee with bouquets of flowers.

The entire jigs and reels event came together due to the collaboration of so many people on and off the stage: the organising committee, the dancers and their mentors; those responsible for props and wardrobe; various musicians and dancers who provided additional entertainment between performances; the hospitality teams; Silverbridge GAC volunteers who stewarded parking, assisted throughout the event & helped prepare and clear the hall; the cameramen, lighting and sound system personnel; the overwhelming support of friends and family members of the 28 dancers, as well as so many others from across the wider community.

For more pictures see the Nightshift on pages22-23