The forgotten days of the silver screen in Bessbrook and Newry 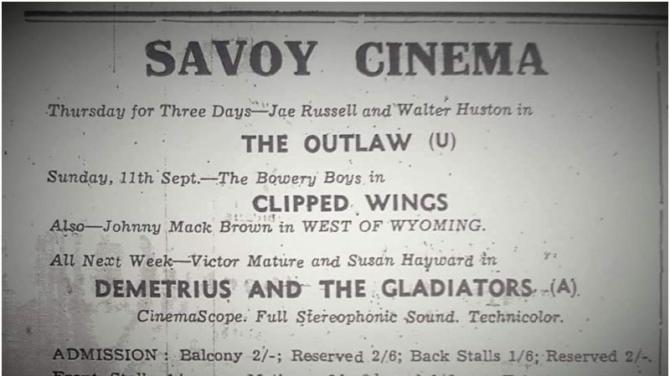 In this feature I have combined short stories from the forgotten days of local Cinemas and Picture Palace's from our Facebook group Newry's Historic Facts Folktales & Photos.

The former Savoy Cinema was built upon the site of Walkers Mill, which was destroyed in a fierce fire in the dying days of 1925 the blaze was so bad that it raged for twelve days into early 1926.

Eight years later a Cinema appears on the site at the corner of Monaghan Street and Merchants Quay when it's listed in the 1934 Kine Year Book as being operated by a Mr. Derek Finney and F.U. Finney, having 750 seats. In the 1953 of the Year Book the operator was shown as The Savoy (Newry) Ltd in Belfast.

1953 for the Savoy Cinema would also witness the building being blown up in June of this year by the IRA. The Savoy was targeted for screening the Coronation film 'A Queen is Crowned' with a young Newry man Joe Campbell being found guilty for the attack and subsequently incarcerated at Crumlin Road Prison.

There is a interesting photograph of the Cinema in its early days from the Down Mesuem with no date on the image. A few years ago I zoomed into the faint poster board in the photo left of the main entrance doors and read the film showing 'A Girl Must Live.'

I had a bit of a search and I learnt the movie and photo dated back just to the beginning of WW2 1939. The film out of interest was about a run-away school-girl who falls in with a chorus girls planning to marry into nobility.

We get an insight into the staff and management at the Savoy having come across a death notice in November 1966 :-

"The death occured of Miss Mary McShane of Edward Street, Newry, aged 60 years old. She was manageress there for more than twenty-five years being promoted to the position after the first manager at the Savoy Mr. Thomas O'Hare of Warrenpoint, and father of the current owner back then Mr. Tom O'Hare took ill. Miss McShane was a native of Drumbally, Glassdrummond, Crossmaglen."

By 1985 the British Film Institute Handbook was listing the Cinema as the Savoy 2, with two screens, seating 179 and 174 these being the days of the proprietor Mr. Patsy Mooney also of adjoining Cupids niteclub fame.

By the 1988-89 the second screen had reduced to 58 seats, the Savoy would eventually close around the time the 9 Screen Omniplex opened in June 1999 at The Quays. Thus bringing Cinema going at this location to an end after sixty-five years.

The Newry Frontier Picture Palace was during its life nicknamed 'The Flea House' maybe most Cinemas got this unflattering name?

The Frontier was housed within the Irish National Foresters Society building that had been erected in 1906 and was listed in 1931 Kine Year Book (3 years before the Savoy) as being operated by that organisation.

The Cinema Theatre Association (UK) Cinema directory for 1980 shows it as the Frontier Picture Palace, now with 590 seats and with Bingo on a Monday and Saturday night. By October 2009 the INF had moved to new premises in William Street, Newry and the former Cinema was used as a Bingo Club which had closed by 2014.

The Imperial Cinema on Newry's Mall was to the rear of the former Imperial Hotel which was at Marcus Square, and originally owned by Joseph J. Byrne. The Imperial is now listed in the 1931,1940 and 1954, Kine Year Book with a Mr. Frank Murtagh as the operator and was still operating in 1966.

There was very little known about the Cinema well on paper, and it would be nice to learn more about it, other than it was closed by 1980 or before this?

Not desiring to leave our Bessbrook neighbours out, they also had a small Cinema on Convent Hill which prior to this the building was a Hibernian Hall. At the Cinema, Mr. Mickey Mathers was the manager and projectionist.

Returning to Newry and the beginning of moving pictures and public baths with a gymnasium at Canal Street were constructed and opened in 1884/85 and after a period of usage mostly by the military at the nearby Barracks and lightermen working on Newry Canal they were to close.

Then in 1911 the Electric Picture Palace under the management of Mr. C Gunn-Cooke took over the premises providing twice nightly silent movie shows at 7pm and 9pm admission 6d and 3d with also a Saturday matinee for children at 3pm.

The Newry public 110 years ago were treated to silent movies such as Rory O'More, Uncle Tom's Cabin, A Tale of Two Cities, Frightened Freddy and the Anarchists and The Captains Bride.

So ends our little journey back in time to the movies and no doubt after lockdown and restrictions in relation to the Covid-19 crisis the simple pleasure of going to the flicks may seem heavenly sent.