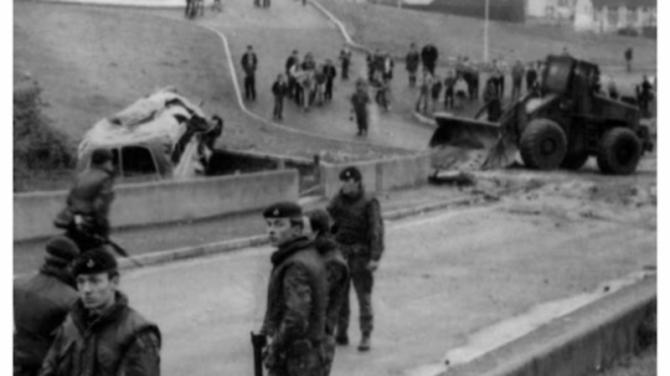 Christmas in Derrybeg that year was memorable for an event that happened just before the lights of the Christmas were switched on.

The committee had erected a twenty- foot Christmas tree at the top of Main Avenue opposite Kevin Quinn¹s house.

Willie Wiley who lived in First Avenue was chosen to be Santa Claus. Now Willie was a good-natured character who weighed about fifteen stone and he was an ideal choice. The committee had bought £50 worth of chocolate bars and these were put into Santa¹s sack and were to be given to the children as presents after the lights were switched on.

The plan was that the Wolf Tone Accordion Band would lead Santa¹s open jeep around the estate to the Christmas tree. Everything was going according to plan with hundreds of children happily walking behind the jeep while Santa was doing his bit by ringing his bell and shouting Ho Ho Ho and Merry Christmas to everyone.

But when the jeep reached the Christmas tree and Santa stepped down from it, all hell broke loose as the children charged Santa to see what was in his sack.

He was soon buried under the hundreds of children as they all slid down the wet grassy slope. Willie was heard shouting in a strangulated, muffled voice, “Get these bloody savages of me.” The sack of chocolates were scattered and it took several men a few minutes to extract Santa from the melee. Poor Willie was shell- shocked as he was taken into Lilia Quinn¹s house to recover from his ordeal. He was covered in muck and his beard and glasses were missing.

The beard was recovered later when a woman spotted a dog trying to bury it in her garden. Order was restored and Santa was persuaded to come out of hiding and join the children singing Christmas Carols around the tree and being the good-natured character that he was, Santa agreed. As the children sang Silent Night and Away in a Manger with their angelic voices few would believe that ten minutes earlier they had almost sent Santa to an early grave. Willie was thanked for his services and was asked if he would play Santa again next year. He grinned and replied, “Will you provide bodyguards?”

After the success of the previous few years, disaster was to strike when, after a dance on a Saturday night, the Social Club burned down. Unfortunately “Purple Love,” the group that played at the dance, left all their instruments behind to be collected the next day; and they were also lost in the fire.

The loss of the club was a great setback to the residents of the Estate as they had grown used to a place of entertainment just a few yards from their homes.

A meeting was held for the residents the following Monday in the Meadow School to wind up the affairs of the club. During the debate an old man called O’Hagan from Fifth Avenue walked up to the table and placed a £5 note on it and said

”There is a little donation to get you started again” It was explained to him that the meeting was not about collecting donations, but he insisted that the committee should try and build another club. On hearing him other residents came up to the table and placed notes and coins on it and they too urged the committee to try again. After a while it was agreed to have another go at building a new Social Club

Sadly, many of those women who contributed so much to the old club and to the community in the early days that made Derrybeg a great place to live in have since passed away. But their memory lives on They include, Ann Faloon, Rita McKeown, Lily Watters, Maureen Maginnis, Bridie Rodgers, Patsy McKeown, Maisie McCrink, Lottie McKeown, Phil Duffy, Mary Morgan, Lila Quinn, Teresa Magee, Margie Jones, Julie Murney, Eileen McCavitt, Tina Coffey, Molly Cranney, Mary Markey, Dolly Kavanagh, Bridie McLoughlin, Margretta McKay. Bridie O’Hare.

Francie Lynch who is at present the sexton at the Dominican Church was a bricklayer at that time and he agreed to build the new club for a small fee of £100 most of the brick laying was done at the weekends.

As the club started to take shape more people who were not active in the old club became involved and their help was very welcome.

Lack of money held up the completion of the work and it was decided to issue envelopes in every estate in the town asking for funds. The response was terrific despite the high unemployment throughout Newry at that time but it still fell short of the amount of money required.

Dancing at that time was very popular so the committee decided to take a chance and book the Town Hall for a dance.

As Tony Coleman was an agent for most of the top bands he was contacted and asked to book a top band, and he managed to book the legendary Derek Dean and The Freshmen for the dance. Everyone was delighted that one of the leading dance bands in Ireland was coming to the Town Hall and with a little bit of luck the Town Hall would be packed and a profit of at least £500 would be made.

The dance was being held in October, which is usually a mild time of the year, but lady luck was to turn against us again as the snow started to fall at mid-day and by six o’clock had turned into a raging blizzard.

The night was ruined as the committee waited at the Town Hall for the customers to turn up but with two foot of snow on the ground only twelve people attended.

As the band had already set up their equipment they played for about an hour to the faithful dozen before they called it a day. The bands fee was £250 and they agreed to wait a few weeks on it. They were eventually paid a few months later. The next morning the snow had disappeared just like our expected profits and the end result was a big loss, as the council officials demanded the Town Hall fee.

The next attempt at fund raising was more successful. It was decided to hold a variety show in the Parochial Hall and all the local artists agreed to give their services free. But as variety shows at that time were on pretty often in the Town we also needed a big name to attract a large audience.

Paddy O’Hanlon who was a frequent visitor to the Derrybeg Estate at that time came to our assistance when he said he would try and get Ronnie Drew of the Dubliners to do a turn at the show. And Paddy kept his promise when he persuaded Ronnie to come to Newry to perform. Anyone who has seen Ronnie Drew and the Dubliners over the past thirty years will realise the great artist that Paddy had secured for the show.

Ronnie was on stage for about fifty minutes and he sang ten songs in between telling yarns audience and they loved it so much that Ronnie had to endure three encores before he was allowed to leave the stage. His fee for his evening’s entertainment was only £30 and he even handed back £15 towards the building fund. He drank the rest of his fee in the Bridge Bar before heading back to Dublin.

Paddy O’Hanlon who was a founder member of the S.D.L.P and later became an M.P was always a good friend to the Derrybeg people in their times of need, which was quite often. At present Paddy is a successful barrister and no one deserves his success more than Paddy O’Hanlon.

As work progressed with building the new club the war drums were beating throughout the North and many Nationalists areas were being attacked by loyalists some residents thought that as Derrybeg had been branded a Republican Estate they could well be a target too.

It is a fact that a large number of Republicans did live in the estate but to suggest that Derrybeg was a one hundred per cent Republican Estate was a myth, but it suited the media and loyalists politicians to say it was for their own personal agenda.

Jack McKenna was appointed as the leader of the group and he would make out a rota from the two-dozen men who had volunteered as vigilantes.

Jack was a very sincere man who had lived through earlier periods of unrest in Ireland and had seen the horrors of sectarian attacks.

His policy was that it was better to be sure than sorry. And so the vigilantes took up their duties of patrolling the estate from about 11-00pm until 6-00am. Six of them would be on duty each night regardless of the weather and though their original duty was to warn of any potential attack from loyalists their attention soon turned to the frequent incursions by British Army vehicles driving through the estate at high speed during the night. The army knew that the vigilantes were watching them but as long as they drove on through the estate without stopping no alarm was raised.

As this game of cat and mouse continued between the army and the vigilantes and the situation in the North got worse Loyalists politicians were increasing their call on the government to introduce interment without trial.

And the people of Derrybeg knew that if it was introduced then their estate was going to be on the government’s hit list. Throughout the next few weeks the vigilantes were instructed to make sure that no false alarms were raised for fear of up setting the many young children that lived in the estate.

But when the interment raid did come at four in the morning on the Ninth of August the vigilantes were surprised at the speed of the army operation.

However they still managed to sound the alarm before they took cover. The army swooped on the estate from four directions, they came on foot over the fields at the back of First and Third Avenue and also entered the estate in Saracens from the Meadow and Camlough roads and they all arrived in the estate at exactly the same time, altogether they had used about sixty soldiers for the operation and in less than about five minutes they were gone again with their captives.

The only comfort for the vigilantes was the fact that several alleged suspects had heard the alarm in time and escaped.

Over the next number of years the vigilantes continued to operate and there was thankfully no loyalist attack on the estate wither that was due to the presence of the vigilantes no one will ever know, but one thing is certain during their presence on the streets the crime rate in Derrybeg Estate was at an all time low. The vigilantes are now a distant memory but their contribution to the well being of the Derrybeg Estate should not be forgotten.