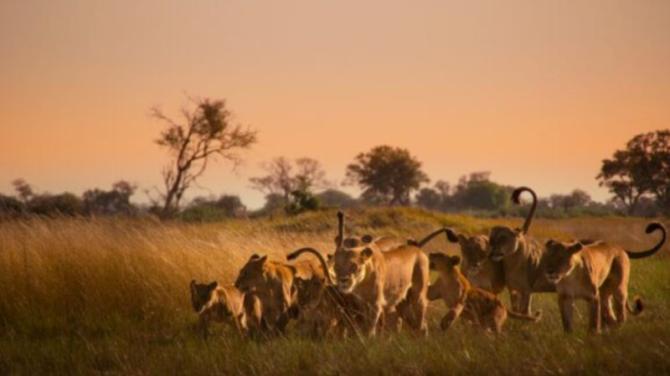 Surviving Paradise explores the Okavango Delta, a vast oasis, isolated from the rest of the world by unforgiving desert. It’s also a refuge, built and maintained daily by its inhabitants; in return, it caters for their every need. Big cats may appear to reign here, but in reality, the fate of every creature, great and small, is intertwined. This film explores the blueprints for building the perfect world, managing it sustainably, and maintaining it – despite extremes of drought, famine, and flood. Most crucially, it spotlights those passing the secret formula on to their descendants, who will find it harder than ever before to keep their Eden intact.

Set over a thousand years ago in the early 11th century, VIKINGS: VALHALLA chronicles the heroic adventures of some of the most famous Vikings who ever lived — the legendary explorer Leif Eriksson (Sam Corlett), his fiery and headstrong sister Freydis Eriksdotter (Frida Gustavsson), and the ambitious Nordic prince Harald Sigurdsson (Leo Suter). As tensions between the Vikings and the English royals reach a bloody breaking point and as the Vikings themselves clash over their conflicting Christian and pagan beliefs, these three Vikings begin an epic journey that will take them across oceans and through battlefields, from Kattegat to England and beyond, as they fight for survival and glory.

During a sleepover, Auntie Opal and her niece Nina accidentally release the mythical and dangerous Erax creatures that must be returned to the storybook from which they escaped.

High school seniors Nikki and Samantha are in love and planning their future — until Nikki's violent past comes back to threaten everything she holds dear.

Raquel's longtime crush on her next-door neighbour turns into something more when he starts developing feelings for her, des

Madea's back — hallelujer! Tyler Perry returns with everyone's favorite character in TYLER PERRY’S A MADEA HOMECOMING, the newest film in the

After going to extremes to cover up an accident, a corrupt cop's life spirals out of control when he starts receiving threats from a mysterious witness.

A blackmail note threatening to reveal a woman’s affair sparks a chain of events that serves as large-scale group therapy for her entire family.

Both the personal and professional tracks of race car driver Bubba Wallace's life are chronicled in this new docuseries. With exclusive access to Wallace during the 2021 NASCAR Cup Series season, his first with Michael Jordan and Denny Hamlin’s 23XI Racing, the six-episode series traces his rise to the elite ranks of NASCAR as the only full-time Black driver and the turbulent aftermath that followed his decision to speak out about racial injustice.

Step into Karma's musical world as she rocks the mic — and her curls — for this fun and funky playlist packed with rhymes and the power of positivity!

Mo Gilligan breaks down his days as a broke teenager, working in retail, relationship dynamics, annoying talk show producers and more in this special.