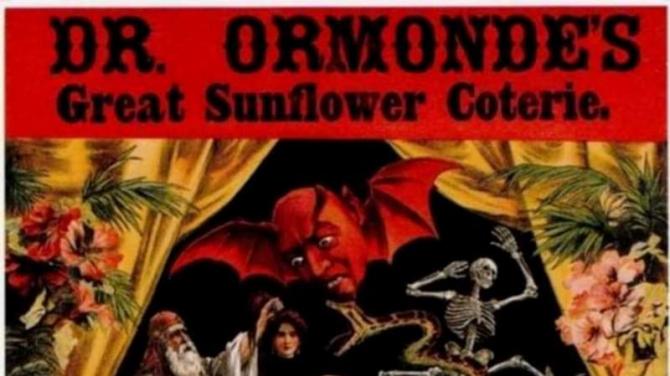 Newry Town Hall with it's rich history having been constructed in 1893, has played host to countless artists with a few fascinating ones I came upon, "Carter the Great" who appeared at least twice in 1911 and the same with a "Dr Ormonde" in 1904. (Not to mention the appearance in Newry Town Hall of Dr Ormonde's friend Harry Houdini also in 1904).

The two Magicians, Hypnotists and Illusionists, Carter and Ormonde, with their companies were accomplished and famed performers of their eras having taken their acts around the world, with Newry featuring on their Irish circuit.

Its surprising giving the content and leanings of such performances that Newry Town Commissioners permitted the usage of their Hall on the grounds of anticipated moral and religious offence, when you consider just over two decades later, movies like Frankenstein were banned from being screened in Newry's cinemas by the towns censors.

About the artist's - 'Charles Joseph Carter (1874-1936) was an American stage magician, also known as "Carter the Great." A native of San Francisco, California, Carter began his career as a journalist and lawyer. As time passed, he grew an interest in magic. Due to stiff competition from the number of magic acts on the American stages at the time, Carter opted to pursue his career abroad, where he achieved his greatest fame.

On his world tour he appeared at Newry Town Hall on at least two occasions in 1911, Easter Monday April 17th, and Saturday September 30th. He would often appear alongside his performing wife Corinne, whom he first met in 1894 and also in his company was Evelyn Maxwell, born Anna Lohmann in San Francisco in 1889, who was Carters assistant and a principle performer in his show for about ten or more years.

She was billed as "The Modern Priestess of Delphi" to promote her mind reading act. Among the highlights of Carter's stage performances during his career were the classic "sawing a woman in half" this illusion was enhanced with an elaborate surgical themed version with "nurses" in attendance. Also making a live elephant dissappear, and "cheating the gallows", where a shrouded Carter would vanish, just as he dropped at the end of a hangmans noose.

Now it was highly unlikely for a elephant to appear in his Newry Town Hall show giving the logistics involved, though no doubt he would have easily been able to make an elephant disappear alright, crashing down through the Town Hall floor and floating down the Clanrye River!

And the other - Dr Ormonde (Andrew Garrioch Ormond) was a British magician/illusionist who along with his family toured extensively in Europe and on Broadway in US. They also performed a number of private audiences with Queen Victoria and other Royal families. During his Irish tours, Town Halls amongst other buildings to be used as venues.

To give us an insight into what a Newry audience was to experience we look at Dr Ormonde's appearance at Castlebar Town Hall around the same era, with a Mr. Alan King, Mayo County Library, back in 2017 revealing - "Dr Ormonde and his company visited Castlebar seven times between 1887 and 1910 (and Newry) and on each occasion, they played to packed houses who were amazed by the variety and content of the acts.

On his first visit, their main act was to make a young lady vanish from the audience and in the full glare of gaslight. A hundred pounds reward was offered before the show to anyone who could explain the trick but when she disappeared in a puff of smoke, no one could figure out how it was done.

Dr Ormonde was a skilled hypnotist whilst his son Fred was a "lightening cartoonist" and ventriloquist who could sketch at speed anything or anyone the audience threw at him. A daughter Stella was a clairvoyant called the "Witch of Endor" who mingled amongst the audience and revealed private and personal information which both delighted and frightened the crowd.

Speculation was rife as to how she obtained the information as the family were met each time at the Railway Station and she was never seen alone or speaking to any townsfolk.

A popular part of the show was the introduction of the "Magnetic Lady" - Miss Minnie Baldwin who would have all types of metal objects apparently attaching themselves to her person and a reward would be offered to six local men who could try together to push her from her balance when she stood on stage on one foot. No one ever succeeded.

A performer (in all probability it was Houdini) was then secured with handcuffs and leg irons and locked in a large iron cage set up in the middle of the room. A blanket was thrown over the cage and after a few minutes the artist escaped. Once again rewards were offered but no one could explain the trick.

At the end of each show, the youngest girl Lottie (who was about six when she first appeared) gave what was described in all the newspapers as a "brilliant violin recital" and have the audience in tears as they left for home. She went on to win numerous international music prizes and has a successful career as a concert violinist.

Yet amazingly at the start of this article I mentioned that the world's greatest escapologist Harry Houdini performing at Newry Town Hall a fact which I don't believe is widely known.

Having looked more into this I learnt that Dr Ormonde and Houdini were good friends and appeared on stage together in places such as the Protestant Hall, Ballymena on Friday 25th August, 1905 (Ballymena Observer, 18th August 1905) and Newry Town Hall on Monday 11th September, 1905 (The Era, 16th September, 1905)

Some of us perhaps when we look back at old Newry imagine a town which missed out on the glitz, glamour and mysteries of the stage. However folk before us (not all) did get the chance to see and experience the greats of the past….and just imagine it Harry Houdini on the stage in Newry Town Hall!