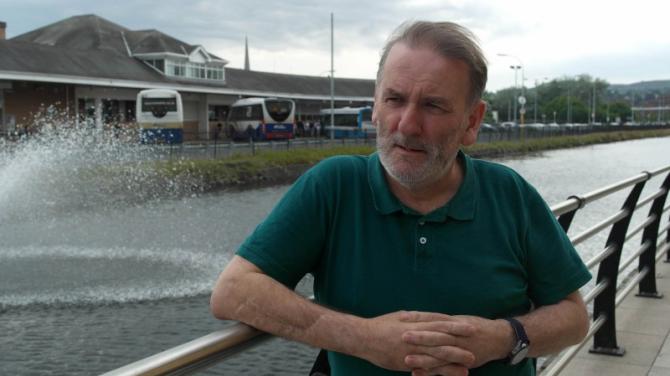 A PRODICAL son and a musical icon are among the highlights already planned for this year’s Iúr Cinn Fleadh (September 6-9).

Local lad Kieran Cunningham returns to Newry with his unique one-man show based on the life of legendary comedian Dave Allen – From The Cradle To The Grave – to the Sean Hollywood Arts Centre on September 6.

Living legend Sharon Shannon is in concert with Jim Murray and Jack Maher at Newry Town Hall on September 7.

A former student at St Joseph’s Boys’ High School and Newry Tech, Kieran Cunningham has been what he describes as ‘a big Dave Allen fan’ since childhood. He has fond memories of growing up in Newry amid its 70s sub-culture of five-a-side football and record shops.

It was going into Sounds Good in Monaghan Street that changed his life. Just as the young Kieran entered the record store, Neil Young’s Four Strong Winds stopped him in his tracks. ‘I loved that song,’ he recalled. ‘I went to learn guitar and I’ve been playing for 30 plus years!’

Now an actor and musician based in Manchester, Kieran has performed acoustic concerts and played roles in a number of TV, film and theatre productions across the UK, Ireland and America. His own Dave Allen show has packed out venues in England and Northern Ireland.

While best known for her arrangements of traditional Irish tunes and Irish-influenced compositions, Sharon also likes to surprise. She’s always been eager to explore new styles, and to meet and work with other musicians.

Her latest album Sacred Earth is a rich blend of Irish and African influences, elements from the classical world, Shetland fiddle tradition, hip hop, country and blues – all simmering together in a sumptuous feast. Newry music fans will be delighted with such an offering.

“And she puts it all down to the time she spent working with The Waterboys, when there were ‘no rules as to the type of music played’.”

Tickets for Kieran Cunningham and Sharon Shannon are available at www.iurcinnfleadh.com.