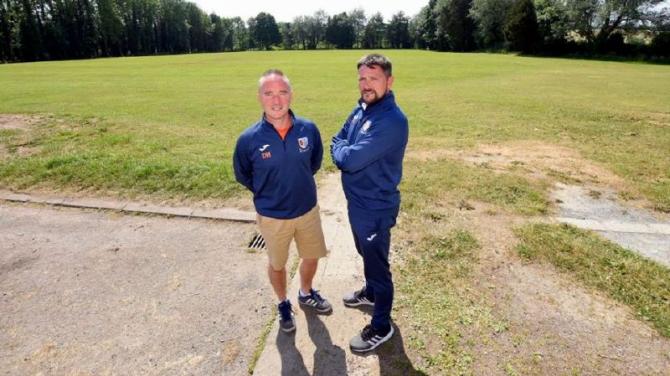 Hillen has stepped down from his role as club chairman and U15 National League manager to take up the first team role.

He is a former player and was instrumental in founding and developing the clubs youth academy ten years ago.

Damien is an accredited UEFA licenced coach with a wealth of knowledge and is looking forward to the new challenge.

His first appointment was to bring in Dessie Gorman. “As soon as I was offered the role and accepted it the first call I made was to Dessie, said Hillen.

His record speaks for itself and him agreeing to come onboard was a huge plus for me.”

The Hawk' has had an illustrious career both north and south of the border as a player winning the League of Ireland with Dundalk and countless Irish Premiership titles with Linfield over the years.

Dessie was manager of Windmill’s U16 in National League team last season and seven of that squad have been promoted to the senior panel to push for a first team place.

They have also added Paul McCrink, and Liam Bradley to the management team and Marty Jennings has agreed to stay on.

“After calling Dessie I spoke to Paul, Marty and Liam,” said Hillen.

“Both Paul and Marty know this league really well, “Paul has won it before as a player and is an excellent coach and Marty has been a constant in the coaching team since the move to Intermediate football.

“Liam makes the step up from the successful U16 management team and is a great addition to the coaching team. Pre-season started yesterday in glorious sunshine.

“We’ve brought in some new faces and strengthened the squad and it’s great to actually get going as we prepare for the season ahead.

Yesterday’s session was tough in the heat but it was really enjoyable.”

Windmill have been busy in pre-season and have signed Ruari Cunningham back from Newry City AFC and that is a massive boost for the club that should be playing home games in Newry this season.

Also coming to the club is former Rockview star Ryan Brown, Camlough’s Lee Lennon and local striker Raymond Fitzpatrick from Lurgan Celtic, which should be a huge boost ahead of the Mid Ulster Interemediate League campaign.