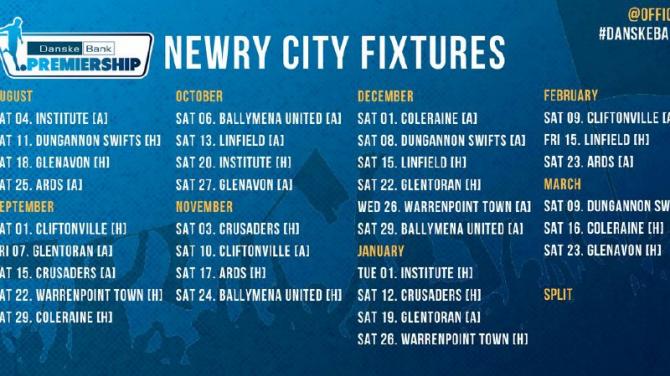 And Warrenpoint Town will go to the Showgrounds in Coleraine to take on last season’s league runners-up in their first fixture.

The news was revealed as the fixtures for the 2018-19 season were issued on Friday past.

The season begins on Saturday, August 4.

Glenavon will come to the Showgrounds on Saturday, August 18 - as they will on the final game before the league splits on Saturday, March 23, 2019.

The Lurgan Blues will provide the opposition for Warrenpoint’s first home game of the season on Saturday, August 11.

The Seasiders will be back on the road the following week as they face the long journey to Institute.

The first derby between Newry City and Warrenpoint Town will take place on Saturday, September 22 with the Showgrounds providing the venue.

As is tradition in the Premiership, Boxing Day on Wednesday, December 26, is derby day and on this occasion the game will be played at the Q Radio Arena at Milltown.

The final derby before the split is scheduled to take place a month later, with the game to be played at the Showgrounds on Saturday, January 26.

Other games of note include Warrenpoint going to Glenavon on New Year’s Day while City host Institute.

Meanwhile champions Crusaders come to the Q Radio Arena on matchday four of the season, scheduled for Saturday, August 25. Darren Mullen’s men will have their first encounter with Stephen Baxter’s side on Saturday, September 15 at Seaview.

It promises to be a fascinating season for the two local clubs in the Premiership - the Newry Democrat wishes them both well in their endeavours!