Baptism of fire for McDonnell's 'Point 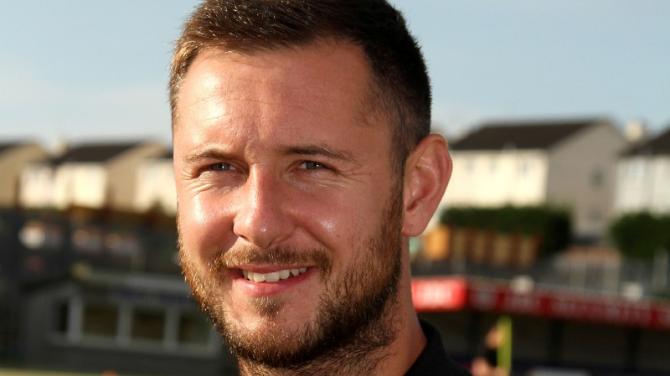 WARRENPOINT Town take on Coleraine at the Coleraine Showgrounds on Saturday in the first match of the new Irish Premiership season.

Playing against the Bannsiders, who led the league for most of 2018/19 and only lost out to champions Crusaders in the final match of the season, is a baptism of fire for young Warrenpoint boss Stephen McDonnell.

Towards the end of last season the Dundalk man took over from Matthew Tipton as a stand-in manager, before guiding the side away from the relegation trapdoor. And he was rewarded for his efforts by getting the Warrenpoint Town manager’s job on a full time basis.

Saturday will be his just his second competitive game since that appointment. The Democrat caught up with Stephen before training last Thursday night and here we found a positive young man, high in confidence and with lots of strong opinions on the game.

Stephen McDonnell said: “We’re confident. We know what we have signed. We’ve certainly improved in my opinion. We’re looking forward to it and let’s see where it takes us.”

On their first match against Coleraine, Stephen said: “Yes we are taking on the mighty impressive Coleraine. A very organised team.

“But we’re going to have to face them all – at least three times throughout the course of the season. Still we have got to be confident about what we’re doing. There’s no point in going out and fearing the opposition. You got to have a game-plan. And if we can build that into next week’s game and are organised the best way possible, then it gives us an opportunity to get something.”

On the Town squad, Stephen said: “We have resigned 12 from last year and still have 60 per cent of last year’s panel here. I think it’s important to keep that connection and we don’t lose everything we had last year. But we have also signed eight new players.”

On signing further players, Stephen said: “When the window closes, we’ll know where we stand but in this moment in time we have nothing lined up. However, anything can happen – there’s still room to manoeuvre within the market.”

On players he signed Stephen said: “We signed Simon Kelly from Glenavon. He’s a colossus, a big man who has plenty of experience and won a lot. We have also taken in Gavin Brennan who has had League of Ireland experience and has played in Europe. Gavin’s another good, big player.

“We have taken in Matthew Lynch from Linfield, a central mid-fielder and for me one of the best technical players I’ve come across. Marc Griffin is a striker who came to us from Glenavon and we’ve signed Ciaran O’Connor, a striker from Dundalk, both fine players. And we’ve snapped up Noel Halfpenny from Crumlin Star who has played with Cliftonville and Bangor and has really, really impressed us. He’s a good kid as well.

“And we have signed Philly Donnelly, another strong player in my opinion, who was with the club before. I know Philly a long time and he’s a huge talent. And finally we have also signed Fra McCaffrey, a top level midfielder.”

“But it’s all about getting equal minutes across the squad and making sure that everybody’s fit and ready with no breakdowns through injury.

“We need to play our strongest team against Coleraine. We are tapering off and certainly lightened the load on the players recently, especially tonight (Thursday) and we will continue doing so next week with a view to playing our best eleven next Saturday. That’s when there are three points to be had.”

When the Democrat asked Stephen if he knew his best 11, the manager answered by saying: “Yes, we have a good idea who we are going to select but there are a couple of positions up for grabs. However, that whole 11 could change come the home game against Glenavon. That’s the importance of having a really good squad and having cover in every area. There’s plenty of competition for places.”

On a tough start to the Premiership, that apart from Coleraine and Glenavon includes games against the likes of Crusaders, Linfield and Cliftonville, Stephen wasn’t at all downbeat, saying, “We play the top six in the first seven games but we won’t shy away from that. And we expect to pick up points.”