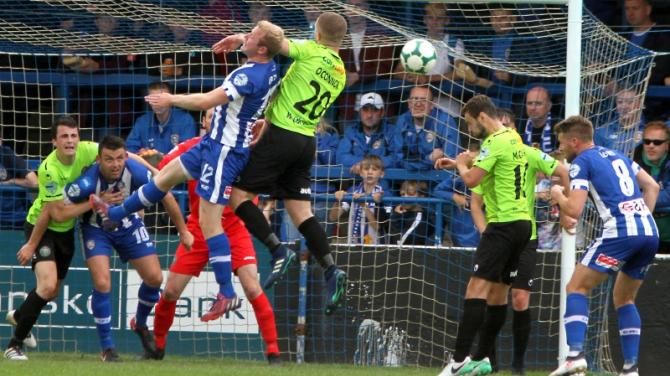 On Saturday at the Ballycastle Road Showgrounds the youthful Seasiders’ boss was an angry man after watching his team drop three points against an understrength home side.

True there were mistakes leading up to the Bannsiders’ goals but in all honesty, and despite the Town having lots of scoring opportunities, Coleraine were the better team.

They moved the ball better, kept possession better – and they did net three times.

Still if Warrenpoint had taken at least half of their chances, it would have been a totally different game.

An obviously irate Stephen McDonnell spoke to the Newry Democrat after the match, saying: “I’m absolutely gutted, overly disappointed. We prepared well in pre-season but at the end of the day there’s nothing you can do about three individual errors that cost us the game. That’s the reality. The statistics are that we didn’t really get cut open at any stage and in fact we had more opportunities to score.

“They used the ball better but were they better on it? I don’t know. We were a bit naive in our play. We created six gilt-edged chances but three basic individual errors cost us the game.”

Warrenpoint began the match with Stephen Moan re-installed as captain and with new boy Eamon Scannell out on the left flank. The youngster was an on-loan signing from Linfield during the past week. And he created the first scoring opportunity of the match. Scannell curled in an in-swinging right wing corner with Ciaran O’Connor rising high and heading goal-wards. But a home defender was in the right spot to clear.

Coleraine were doing most of the pressing but Warrenpoint were more dangerous in front of the target. On 25 minutes Scannell again delivered a fine ball into the Coleraine penalty area but Alan O’Sullivan just failed to make contact.

Although the best Town first-half opportunity came on 30 minutes. Fra McCafferty broke clear down the left and had a clear run at the Coleraine goals. The midfielder could have shot but he elected to pass to O’Sullivan. However, an alert Coleraine defender read the situation perfectly and swiftly cut out the danger.

Yet at the other end the home side were not as wasteful. On 38 minutes Josh Carson made ground down the left and centred with Stephen Lowry popping up behind Danny Wallace to shoot from point-blank range. Jonny Parr did well to beat out the drive but only as far as the in-rushing Ian Parkhill who slammed high into the Town net from 18 yards. Parr did get a hand to the shot but the power of the drive was too hot for the keeper to hold.

Six minutes later the Bannsiders doubled their tally. Eoin Bradley dinked a ball in from the left, Alex Gawne pounced when Wallace hesitated to flick though and there was the opportunistic Lowry beating Parr to the punch before touching into the net from three yards.

Two nil down at the break and just 60 seconds after it the Bannsiders killed off the game. But the goal was a tragedy for the experienced net-minder Jonny Parr. After a long, hopeful Carson ball down the middle the big Rostrevor man seemed to have the situation well in control. However, Parr took his eye off the ball, miscued his attempted clearance with the gleeful Coleraine skipper Eoin Bradley scampering in behind to score the easiest goal of his career.

The match was over as a contest. Though in the remaining 44 minutes Warrenpoint had a host of scoring chances.

On 51 minutes O’Connor shot narrowly past the angle of the Coleraine goals and on 69 minutes the same player beat the Bann keeper Chris Johns but a defender cleared the danger. And in between those efforts, Johns pushed a Fra McCafferty left-wing corner kick onto his own crossbar.

And the Town knew their luck was out on 75 minutes. Again Scannell delivered a great ball from the left to the in-the-clear Alan O’Sullivan. The striker shot from eight yards but his bullet drive rebounded off the post. The ball then fell to O’Connor who twice had shots blocked.

In the closing minutes Scannell fired a 20-yard freekick well over the top and on 89 minutes Wallace struck the Coleraine woodwork (for the third time) following a Gavin Brennan corner.

It was definitely not Warrenpoint’s day.

On a positive note, manager Stephen McDonnell said of his on-loan signing Eamon Scannell: “He was probably one of our brighter sparks – him and Ciaran O’Connor. They both did really well. The two centre halves played well and Gavin Brennan did well when he came on but that was about it.”

When asked about Marc Griffin and Simon Kelly who were not on the team-sheet, McDonnell said: “They were carrying knocks. We could probably have played them but we choose not to use them today.”

And on next week’s game against Glenavon: “We’ll dust ourselves down, reflect, and go again and then its up to the players to perform.”