The fairytale of   Newry City continues 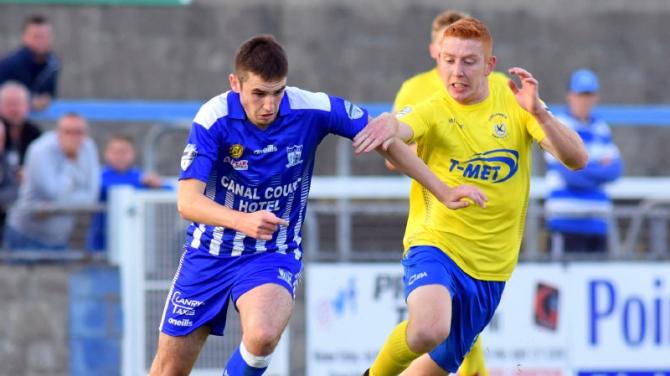 A GROUP of amazing footballers who continually reach for the stars and a manager who dared to dream, wrote yet another amazing chapter in the scarcely believable novel ‘Fairytale of Newry City’ on Friday night at the Showgrounds.

Local-boy-made-good Conor Grant, a lifetime Newry fan, the boss of Sky Bet and this season a City committee member, speaking to the Democrat at half time at the Showgrounds, cited odds of 200-1 against his home town club winning the Gibson Cup.

It’s an impossibility, pure fantasy to think that Newry City AFC will win the Irish Premiership … but is it any more incredible than what the club have achieved in the past five years?

The once down-and-out team have reinvented themselves, rising like a phoenix from the backwaters of the Mid-Ulster League to the high profile Danske Bank Premiership in just a few short years. Thus who’s to say this fantasy football story won’t continue.

A delighted City manager Darren Mullen spoke immediately after the game, saying: “Winning tonight is a mixture of joy and relief. We were 2-0 up and should have gone 3-0 up. We were hanging on and it was a wee bit nervy towards the end when it didn’t really need to be.

“But I thought we were excellent from start to finish - it was a deserved win. We had a game plan. On Thursday night at training we went through the mistakes we made last week. The lads were super and everybody played his part.”

On Friday evening at the Showgrounds, on a pitch looking as splendid as any ground in the English Premiership, big time football was back in the city after break of almost six years with a bumper crowd turning up to welcome the returning heroes.

And those heroes, who had nine players from last year’s Championship side and who brought another two locals into the starting 11, Newry lad Andy Coleman and Banbridge’s Stephen Teggart, didn’t let them down.

In the opening period chances were sparse although on four minutes a defender got in the way of a shot from the excellent Decky Carville.

However, things weren’t looking pretty for the home side on 19 minutes when referee Shane Andrews adjudged that Darren King had hauled down Dungannon’s Daniel Hughes, whose two brothers Stephen and Mark, were playing for the home team.

Hughes quickly grabbed the ball to take the resulting spot-kick and though he placed his shot perfectly into the bottom corner, former Dungannon net-minder Andy Coleman, making his Newry City AFC debut, hurled himself to the right to make a tremendous save against his ex-team-mate.

This was surely the turning point in the match as if the Swifts had scored it would have boosted the visitors while knocking the home team’s confidence.

Yet Newry should have had a penalty of their own just two minutes later as, following a Stephen Teggart pass and a Stephen Hughes header, a Swifts’ defender, Douglas Wilson appeared to handle. The referee though shook his head.

Still City began to push the pace. On 28 minutes skipper Mark Hughes curled in a right wing corner, Carville headed down, but Teggart blazed over the top from 15-yards.

Both sides had further scoring opportunities before the break. Colman dropped to save well from Kris Lowe while at the other end Mark McCabe was inches too high with a 25-yarder.

After the break the home defence was under a wee bit of pressure but the back four of Darren King, John Boyle, Dara Noonan and Paddy Mooney, backed up by midfielders Thomas McCann and Mark Hughes, were solid and safe.

Ten minutes after the break the referee Andrews incurred the wrath of the City fans who howled for a spot kick after a defender hauled down the dangerous Carville.

And it seemed it wasn’t going to be Newry’s night as on 62 minutes Teggart crossed accurately from the right with Carville storming in to direct a bullet header towards the bottom corner of the Dungannon net.

Unfortunately Decky’s aim was slightly out as the ball thudded against the base of the post. Still the danger wasn’t over as Stephen Hughes fired the rebound goalwards but this time the despairing arm of Swifts’ keeper Alex Moore kept out the shot.

Five minutes later though Newry did grab the vital opener. Teggart centred from the right and this time the referee got it right when he pointed to the spot after O’Rourke had fouled Carville. And up stepped the wee man with ice in his veins, a wee man who virtually never misses when the pressure is on – Stephen Hughes. He put the penalty kick in exactly the same spot in the same goals as his brother Daniel. But this time there was no Andy Coleman to keep out the kick and Rambo had snatched the opening goal of the match and Newry City AFC’s first goal in the Premiership.

On 71 minutes the same two Newry men were involved in the home team’s second goal – another penalty kick. Jake Dykes chopped down Carville as he was going through with Stephen Hughes out-thinking Moore and shooting to the keeper’s left as the net-minder went to his right.

2-0 but Dungannon substitute Rhyss Campbell had a chance to reduce the deficit on 76 minutes. However, Andy Coleman did well to save.

Still Newry really should have had a third goal with the move of the game.

On 79 minutes Paddy Mooney, having a super game at left back, won the ball with a brilliant interception. He played a quick pass to Stephen Hughes and hared forwards to take the return. Mooney’s lightning pace put him totally in the clear but Moore denied the youngster his first Premiership goal when he stuck out a foot to deflect the shot away from the target.

Skipper Mark Hughes too had an opportunity but his cross shot just missed the post.

The game seemed over but Dungannon threw themselves a lifeline on 88 minutes when Jarleth O’Rourke drilled a snapshot into the bottom corner of the Newry goals from 20 yards.

In those last couple of minutes, plus four more of injury time, the Swifts pushed up for an equaliser and there were a few dicey moments but the home defence did the business to earn three absolutely vital Premiership points.

Will the good times continue on Friday evening (7.45 kick-off) when Newry take on Glenavon at the Showgrounds?

Three points here and the incredible dream will sprout legs and take on a new prospective.