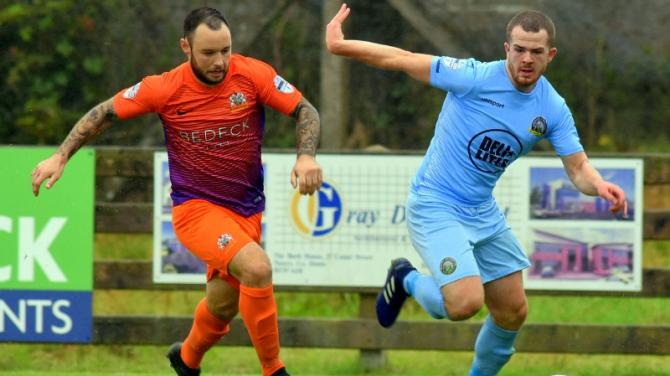 WARRENPOINT Town manager Stephen McDonnell bemoaned missed opportunities and sloppy defending for Saturday’s defeat to Glenavon but insists it is imperative his side get something from the game against Institute at the weekend.

Played at the Q Radio Arena at Milltown, the Seasiders got off to a promising start by taking the lead but they squandered chances to go further in front and that is where the Town boss believes the game was lost.

“I am very disappointed of course, I feel when we were 1-0 up we had a couple of chances when in 3v4 scenarios and the decision making process from our attacking players wasn’t there today and we weren’t able to defend four fundamental goals.

“I am very disappointed the way the game panned out and then even to get back in it, to get a relapse, the same as last weekend, is obviously very disappointing for the players and us as staff, to throw another game away like that.”

That relapse was a mistake by goalkeeper Parr, who timed his run well but miss-cued his attempted clearance. Andrew Mitchell nipped in to capitalise on his error.

It was symptomatic of Warrenpoint’s play, as they created chances and caught the Glenavon defence out, but they failed to execute what was expected with poor passing when it mattered most.

“Conceding goals is one thing and not scoring goals is another that is what is more frustrating for me. We probably could have been out of sight in the first half, if we had of capitalised, but when players are not in sync that will be a bigger concern for me,” McDonnell said.

Glenavon’s big Andrew Mitchell bullied the Warrenpoint defence and it wasn’t surprising given that Stephen Moan was half a foot smaller than the top striker. Mitchell scored two goals and set up two others - he is a player Darren Mullen will have plans for when Newry welcome Glenavon to the Showground on Friday.

Warrenpoint Town took the lead on 11 minutes when Alan O’Sullivan slotted home after Francis McCaffrey’s effort from Ciaran O’Connor’s pass was initially saved by Tuffey. It was a well-worked move, started by Gavin Brennan at the back.

The Seasiders were on the front foot and O’Connor had a half-chance but he volleyed straight at the keeper.

But Warrenpoint got their warning on 31 minutes when the powerful Mitchell headed over from Donnelly’s cross.

And it wasn’t heeded as two minutes later the sides were level. The Point were caught through the middle with Mitchell intelligently knocked the ball down to Mark Skyes, who stroked past Parr.

And three minutes later Glenavon were ahead when Stephen Donnelly hit home after Mitchell outmuscled Moan down his left and crossed for a Donnelly tap in.

And it got worse for the Point as with 45 minutes played Glenavon went further ahead as Alan O’Sullivan was robbed of possession and Andy Hall whipped in a lovely pass for the grateful Mitchell to smash home.

The second period was a game of half chances as O’Connor tested the Glenavon keeper and at the other end substitute Anto Reilly cleared off the line from Mitchell's shot.

On 66 minutes Warrenpoint should have had a penalty when Newry lad, Caolan Marron, who had a great game, took down O’Connor, but referee Keith Kennedy thought otherwise.

However, Warrenpoint did pull a goal back on 74 minutes when Conall McGrandles headed home from Eamon Scannell’s corner, so there was plenty still to play for, or so it seemed as Parr raced off his line and Mitchell slotted home his second goal to put the tie to bed.

Parr did pull off a double save moments later but there was no late comeback from the Point.

It will take time for Warrenpoint to gel and there were encouraging signs, but they need to click on Saturday.

Glenavon are back in the area on Friday night when they take on Newry City AFC at the Showgrounds, while Warrenpoint travel make the trip to Derry’s Brandywell to take on Institute.

And given that they weren’t outplayed by two sides who played in Europe, the Seasiders can be confident of getting a results against ‘Stute.

“It is great that we are coming away from games against Coleraine and Glenavon very disappointed and we certainly feel we can get up and at these teams,” said McDonnell.

“But certainly Institute are a team we will be expected to battle around along with Newry, Dungannon and Ards and obviously those are the teams we need to be looking after. Our own wee mini league as such.”