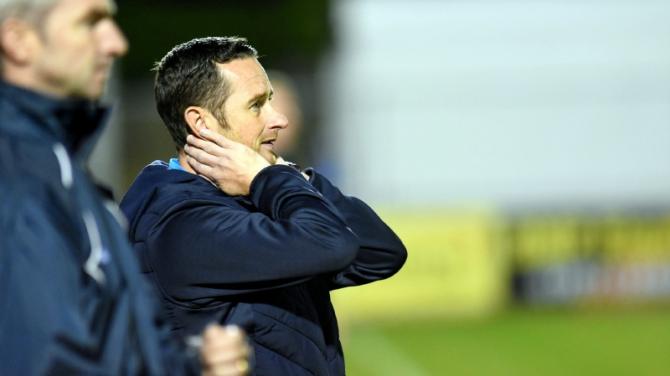 A SOFT penalty decision cost Newry City dearly against Glenavon at the Showgrounds on Friday evening.

With 21 minutes gone and against the run of play in City’s second home Danske Bank Premiership match of the season, the referee Tim Marshall pointed to the penalty spot after he adjudged City keeper Andy Coleman had fouled the visitors’ Mark Sykes with Gary Muir rifling the resulting spot kick into the Newry net.

After giving the penalty the official was surrounded by irate Newry players while the fans went wild at the apparent injustice of it all.

City manager Darren Mullen too was aggrieved at the penalty decision as he spoke after the game: “I think everybody in the ground could see it wasn’t a penalty, including the fourth official. Even the lad himself apologised to Andy (Coleman) afterwards.

“He played for it. Everybody could see it was a blatant dive. That’s the annoying part. If you’re beaten fair and square you hold your hands up and take your medicine but to concede a goal like that, especially when we were on top, is hard to take.

“We were the better side in the first 20 minutes but that decision deflated us a wee bit and we maybe felt sorry for ourselves for ten or 15 minutes. We then conceded another soft goal. But we got ourselves back into it at a good time – just before the break.

“And I thought in the second half we were terrific. We had chances to equalise but unfortunately it just wasn’t our night.

“Sometimes chances fall for you and sometimes they don’t. Decky (Carville) had a great header and Stefan (Lavery) should have done better with a great chance while Rambo (Stephen Hughes) was out of luck in the last minute.

“They had a few chances towards the end but I don’t think anybody would have begrudged us at least a draw. We played extremely well and I’m very proud of the players but it’s a small comfort at this stage,” said the City boss.

Neither Paddy Mooney nor Tiernan Rushe were included in Friday night’s squad and when asked why they weren’t included, the manager replied: “On Paddy Mooney, it was an internal matter.” On Rushe, Darren said: “He was missing last week because of the gaelic and I have to be fair to the players who have been training. Ballyholland are out of the Championship now so Tiernan will be available from next week on.”

On Kevin McArdle coming on as substitute, Darren was glowing in his praise as he said: “Kevin played well when he came on and it shows his character. On Wednesday he drove from Dublin to Dungannon to play for the U20s – and he scored and played extremely well. You know what you get with Kevin. He’s a great lad personality wise, on and off the pitch. He’s got that quality and he was threat when he came on. He certainly did himself no harm this evening.”

In front of another bumper crowd (estimated at almost 1,000) City began confidentally against their Lurgan rivals, who incidentally had young Newry lad Caolan Marron playing, and doing well, in the heart of their defence.

On three minutes Decky Carville and Conall Delaney combined to set up Stephen Teggart but the youngster fired over the bar. While minutes later at the other end Mark Sykes shot narrowly wide.

On 10 minutes the busy Delaney created an opportunity for Mark McCabe but the Bessbrook lad couldn’t control the pass. However, against the run of play the visitors grabbed that debatable penalty goal on 20 minutes. This score gave Glenavon confidence and on 21 minutes Coleman had to be alert to save from Sykes.

The same Sykes set up Glenavon’s second goal on 34 minutes, picking out the rampaging Stephen Donnelly who ghosted in behind the Newry defence before steering the ball past the advancing Coleman.

At that stage it was looking bad for the home side but they kept battling on and two minutes before the break they pulled a goal back. Delaney did super work in defence and picked out Mark Hughes down the left flank. The City skipper in turn found Stephen Teggart on his left and the slick-quick striker cut in before firing past the helpless Jonathan Tuffey to snap up his first Premiership goal.

Three minutes after the break the Lurgan Blues had an opportunity in restore their two-goal cushion but Coleman did brilliantly to deny Josh Daniels.

Meanwhile at the other end and in the next minute Stephen Hughes, McCabe and Teggart combined to set up Carville but the big man was off target.

On 63 minutes Kevin McArdle came on for Delaney and began causing Glenavon problems down the right flank.

And on 68 minutes Newry could have squared matters but unfortunately substitute Stefan Lavery shot straight at Tuffey following a right wing Teggart corner and a Mark Hughes header back across the goal. Carville too had another scoring opportunity on 75 minutes but again Tuffey was in the right spot to save.

However, Newry really should have picked up a league point right on 90 minutes when Stephen Hughes popped up in the box but keeper Tuffey got a foot to his close-range drive to avert the danger.

It was Newry’s second Premiership defeat but City will go looking to snatch their first away win when they travel to the Bangor Fuels Arena on Friday night to take on Ards. A win here is most certainly on the cards as their rivals have yet to pick up a point, indeed losing their first three games

Darren Mullen said: “We can’t feel sorry for ourselves. We have to pick ourselves up quickly. We have an away game against Ards next week and it’s going to be difficult. But if we play like we did tonight we’ll give ourselves a great chance.”

On Ards 3G pitch, Darren said: “It is what it is; we know what we’re going to play on. We played on a 3G pitch up at the Brandywell and the pitch certainly wasn’t an excuse for our defeat.

“We’ll prepare for it. Whether you play on 3G or grass, Ards are going to be a difficult side to beat. We’ll regroup at training on Monday night and get ourselves ready for it.

“It’s going to be a tough game. But there are no easy games in this league. Tonight’s gone; it’s done and dusted. I spoke to the players and told them to forget about it. They did well - I couldn’t have asked for much more of them so we will just now focus on the Ards game,” concluded Darren Mullen.