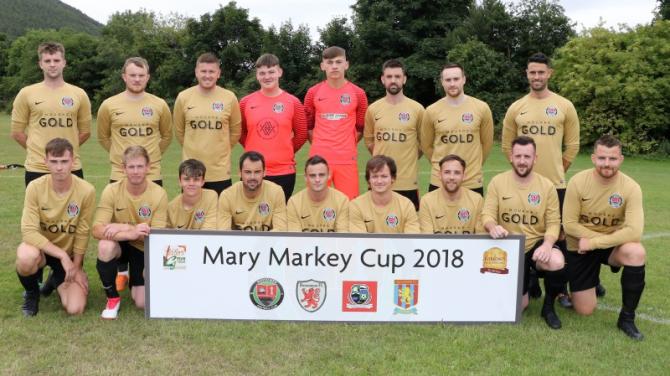 RICHIE REYNOLDS struck a hat-trick of penalties for Rossowen as they warmed up for their Kennedy Cup final against Ballyoran at Armagh City’s Holm Park on Friday night, with a spectacular eleven goal thriller against Millburn United at Jimmy McAlinden Park, writes Sean McKevitt.

It was a game which both defences will want to swiftly forget about, with 11 of the goals coming in the first half, while there were also four penalties awarded.

Furthermore, ex-Rossowen striker Sean Gorman netted four goals against his former club but still finished on the losing side.

The season is only up and running a matter of weeks but Rossowen have already been involved in several high scoring encounters. Just last week the Rostrevor side were ousted from the Bessbrook Cup on penalties by Parkview after a 3-3 draw, while in the previous rounds of the Kennedy Cup the Reds knocked out Villa Rovers 5-3 and beat Cleary Celtic 3-2. Not forgetting also the 4-3 defeat of Villa Rovers in the Mary Markey Cup final!

Rossowen’s hat-trick hero from Saturday afternoon Richie Reynolds was deployed at left-back last season, but the decision this term to push him further up the pitch by the Rossowen management team has paid dividends, with Reynolds also netting late winners against Cleary Celtic in the first round of the Kennedy Cup and in the Mary Markey Cup against Villa Rovers.

Speaking exclusively to the Democrat, Reynolds, who also stars for the Rostrevor GAA team, says it has been the strength in depth of the squad which has seen them through to their maiden competitive cup final, while he believes that the shrewd addition of Denis Rooney to the management set-up has been a key factor also.

“I think people thought because we lost some of our boys to Millburn that we would have struggled a wee bit. But we’ve taken in a few lads from Kilkeel and they’re all pretty useful. We’ve a really good squad this year; previously if we lost our Gaelic boys, the squad would have been very stretched and weakened. But our Gaelic players, including myself, were missing for some of the earlier rounds of the Kennedy Cup and the boys did the business, so I definitely think the squad is stronger,” said Reynolds.

“Denis Rooney has come in also, along with few of the ex-Kilkeel boys to help John [Markey] out. It’s been really good to have Denis there, both in training and on match days, for a different voice and another perspective, he’s definitely been a great addition to us. He has plenty of experience in managing and he’s as passionate as ever.”

Rosswen got off to a dream start against Millburn, racing into a two goal advantage early on through a goal from Jason Havern and a penalty from that man Reynolds. However, their lead was to prove short lived as goals in quick succession from Millburn debutant Sean McMullan and former Rossowen hit-man Sean Gorman restored parity after 20 minutes.

The end to end action was showing no sign of abating, with Gareth Clarke hitting the net on the half hour mark to nudge Rossowen back into the lead, before a Sean Gorman penalty drew Millburn level once more.

But Rossowen, who had Shaun Parr pulling the strings in midfield, regained the advantage just before the break through another Richie Reynolds spot kick.

Millburn levelled affairs for the third time in the game on 56 minutes when Gorman fired home for his hat-trick.

The two sides continued to trade blows, with Rossowen’s Aidan Cousins scoring to make it 5-4 to Rossowen, shortly before Gorman notched his fourth on 70 minutes to set up a grandstand finish to this fascinating encounter.

Both sides went gung-ho for the winner and in truth it could have finished 8-8. But with five minutes left on the clock Rossowen were awarded a third penalty, which Reynolds coolly converted, to snatch the points for his side.

Looking ahead to the game against Ballyoran on Friday night at the 3G pitch in Holm Park, Reynolds admits they don’t know too much about their opponents, but says Rossowen are relishing the challenge and eager to annex the club’s first ever competitive trophy.

“We don’t know a lot about Ballyoran. We played Coalisland in the quarter final, who are in the same league as them, so we’re thinking they’ll be around that sort of level of team.

“ I know they played Windmill Reserves recently, so we’ll be trying to find out a bit about them from Windmill. They’ve a guy up front who scores plenty of goals, so we’ll need to keep an eye on him,” he said.

“The ball is going to move fast on the 3G surface, we’re going to have to adapt to the pitch and retain the ball. We’ve trained on the 3G pitch at the Abbey and in Rathfriland, and we’ve played Valley Rangers a couple of times on their 3G pitch so it’s not a complete unknown for us.

“Considering the club is only in existence just over a year it would be a massive achievement for us to win the Cup. It would be the first piece of competitive silverware to come into the club and it would show we’re here to challenge at all levels at the club. We have an under 19, with a steady influx of those lads coming through into the senior team, so it’s about bringing those guys into the club for long term success as well.”

The inclusion of goalkeeper Matty Sherry in the first team this season is proof that the youth set up is already beginning to bear fruit at Rossowen. Sherry has impressed since forging his way into the first team and is likely to start in goals on Friday night, while other promising players from the u19 side; Adam Morgan, Ronan Daly and Conor Parr have featured for the firsts already this season and will have hopes of inclusion in Friday’s squad.

Aidan Cousins, Stevie O’Hare, Gareth Clarke, Kevin Maxwell and Cormac Markey are all match-fit and will battle it out for the back four positions.

But midfield duo Conor Cole and Ruairi Cunningham could well miss out on the showpiece game, as their GAA club, An Riocht, are also in action on Friday evening.

However, with a big squad at their disposal, Rossowen managers John Markey and Denis Rooney possess plenty of quality in the midfield department, with the likes of Shaun Parr, Conor Fegan, Niall Rooney and Richie Reynolds all consistent performers. The talented Jordan Fegan also made his return to first team action, coming off the bench for the last 20 minutes against Millburn and could force his way into the starting eleven.

Meanwhile attacking speed merchant Ciaran Bradley should lead the line and will undoubtedly cause Ballyoran plenty of problems with his searing pace and mazy runs.

For those interested in attending the big match, Rossowen are running a bus, which will be leaving Rostrevor at 5.15pm, at a cost of £10 return. Anybody interested in travelling on the bus is asked to contact the club’s Facebook page ASAP.

NEWRY CELTIC swept aside the challenge of Ballybot United on Saturday and now sit level with Cleary Celtic at the summit of the Premier Division League table, after securing maximum points from their opening two fixtures.

The Newry Celts were pushed all the way last weekend against a determined Millburn United, collecting the spoils thanks to a late winner from Stephen Daly. But the Hoops had a much easier day at the office against Ballybot and once they got their noses in front, Ciaran McDevitt’s men never looked like surrendering their lead.

Ace striker Daly and classy midfielder Stephen Wylie were amongst the goals for the second week in succession, while Celtic’s other scores were courtesy of a strike from close season signing Josh McKeown and a Ballybot own goal.

Killeavy went into the game looking to make amends after their opening day defeat to Rockview United, and manager Paddy McCann will be delighted with his side’s performance, while he will also be pleased to see talisman Barry Magee back on form, who capped off a fine display with two well taken goals.

CARTWHEEL UNITED recovered from a two goal deficit at half time to beat Grasshoppers at Jennings Park.

The Hoppers looked on course for the win after goals from the diminutive Shea McGuinness and captain Kieran Slim saw them take a commanding 2-0 advantage at the break.

But Cartwheel produced a resilient and determined second half performance to score three unanswered goals of their own to clinch all three points.

The south Armagh men raced out of the blocks after the break and three minutes in, Jason Kieran halved the deficit, before Tony Byrne levelled affairs on 70 minutes.

The game was nip and tuck at this stage, with both sides going all out for the win. But with just five minutes remaining Jason Kieran fired in a free-kick to register his second of the afternoon and complete the Cartwheel comeback.

GREENFIELD PARK recorded their maiden win of the league season after the estate side comfortably saw off a below par Derrybeg at Jennings Park.

JP McIlvenny (2), James McKevitt, Aaron Byrne and the evergreen John Finnegan were the men on target for Antony Harkin’s side, while Jakub Stefanko scored for Derrybeg, to add a modicum of respectability to the scoreline.

GOALS from Paul Daly and Paddy Smyth helped Villa Rovers see off a dogged Crieve Rovers in the second round of the Bessbrook Cup at Olympic Park.

The Villains are making hard work of their lower division opposition in the Bessbrook Cup thus far. In the opening round Mark Lennon’s side drew two apiece with Grasshoppers after extra time, but edged a tense penalty shoot-out 5-4. And they were again pushed all the way on Saturday by a gritty Crieve side, who by all accounts were bitterly disappointed not to have at least taken the game to extra time.

Villa must up the ante in the quarter finals of the competition which sees them drawn against Millburn United, while Mark Lennon will also hope to have key player Darren Fegan back for the tie, as he is currently curtailed with a knee injury.

FINN HARPS continued their stellar start to the 2018/19 campaign, beating Mourne Athletic by a convincing 6-2 scoreline, to ease into the quarter finals of the Bessbrook Cup, where they will take on the holders of the competition, Bessbrook United.