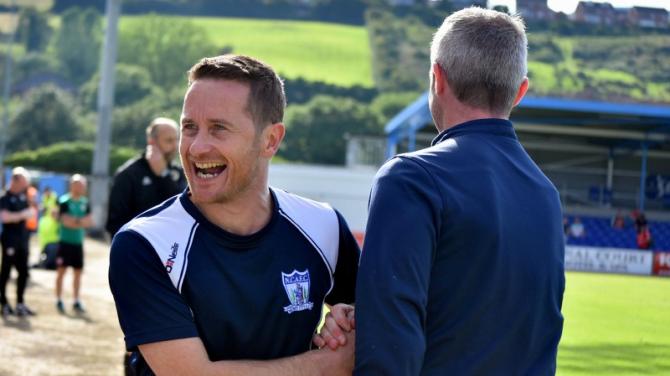 THE remarkable fairytale of Newry City AFC continued on Saturday afternoon at the Showgrounds where the club earned a deserved 1-0 victory against Premiership heavy weights Cliftonville.

A second half header from the inspirational John Boyle proved decisive, in a game which also saw Cliftonville finish with ten men, after Jamie Harney received his marching orders for a last man foul on Newry’s Stefan Lavery.

But that’s not taking anything away from the performance of Newry, who were absolutely tremendous all over the park. In fact the scoreline flattered Cliftonville somewhat and, but for Newry’s profligacy in front of goal in the second half, they could easily have won by much more.

Cliftonville were restricted to very few goalscoring chances in the match, with Newry goalkeeper Andy Coleman hardly having a save to make. But that was in no small measure due to the stubborn resistance of the watertight Newry rearguard, which was superbly marshalled John Boyle and Dara Noonan, while full backs Darren King and Dale Montgomery were in exceptional form also, with Montgomery deservedly picking up the Man of the Match award for his outstanding display.

Thomas McCann excelled in his holding midfield role, which allowed the Hughes brothers and Declan Carville more space to exploit the space in front of the Cliftonville defence.

Up front, Stefan Lavery worked his socks off, before picking up an injury and was replaced by hardworking Mark McCabe in the second half. While substitute Conall Delaney, who replaced Stephen Teggart at the break, ran the Reds defence ragged with his blistering pace and mazy runs.

The victory was yet another landmark occasion for the club, who have risen from the ashes since reforming in 2013 and now sit proudly amongst Northern Ireland’s elite in the Danske Bank Premiership.

It’s fair to say that not even the most optimistic of Newry fans would have predicted their meteoric rise in such a short timeframe. Games like these seemed like an eternity away five years ago when Darren Mullen and his Newry side were getting to grips with life in the Mid Ulster Intermediate B league - the fifth tier of Northern Irish football. While in stark contrast, that same year Cliftonville won the Premiership title and went on to face Glasgow Celtic in the Preliminary rounds of the Champions League. Incredible stuff.

On Saturday afternoon Newry hoped to bounce back from last weekend’s disappointing 4-0 defeat away to Ards, against a Cliftonville side, who had picked up just five points in their opening four games. Still, the Reds were overwhelming favourites to put Newry to the sword and this defeat will mount further pressure on their manager Barry Gray.

Meanwhile, Newry City boss Darren Mullen was delighted with his side’s response from last Friday’s night’s sub-par performance against Ards and declared that the victory will give his team the confidence and self belief that they can hold their own in the Division.

“Today we spoke to Andy [Coleman] and the defenders that, if we keep a clean sheet we have a really good chance. It was never a case of containing them and trying to get a draw, it was always about how we can win the game and the lads carried it out to perfection,” said Mullen.

“Even when they had 11 men, I thought we were terrific. We needed to do something after last Friday night’s performance because it was unacceptable and the disappointing thing was Ards didn’t have to work very hard for it. It was very unlike us. We spoke to the players about it at training and made sure whatever happens, as long as they give me 100 percent, I can’t complain.

“We worked hard on our shape on Thursday night at training, everybody knew their role and thankfully everybody stuck to that role.

“I thought the lads were magnificent out of possession in terms of keeping our shape. We probably could have been a bit better in possession of the ball, but that’s something as a coach I’ll be looking to improve, because we could have picked them off even more. I don’t think two or three nil would have been an unfair reflection of the game. But I certainly can’t fault the players for effort, the three points is very well deserved. As a team, including the lads who came on from the bench, I thought we were magnificent.

“As a manager and a coach the most pleasing thing to see is your tactics being implemented.

“It can be frustrating when your players don’t follow your game plan, but every single player stuck to the game plan this evening. It’s something that’s hard to do when you haven’t got the ball but I thought they were magnificent. It was be unfair to single anybody out. The sending off didn’t change a whole lot. We didn’t panic or change our game plan but it’s a big result for the club because it gives us that belief. We’ve beaten one of the so called bigger sides in the league and done it deservedly.

“I said to the players you’ve now set the bar higher in terms of how you apply yourselves because that performance and result has shown that if we can keep our discipline and follow our tactical instructions then we give ourselves a real good chance of doing well this year.”

Mullen made several personnel changes from the Ards match, with Stefan Lavery and Dale Montgomery coming into the starting 11 and both players hugely impressed the City manager.

“I thought Stefan worked extremely hard in a difficult position, because he was isolated there. But he held the ball up well. He was playing against bigger physical players and he brought other players into the game,” he said.

“I hadn’t spoken to Dale about playing that position (right back). When the team was named that was the first he knew about it, but he came in and he was excellent. I spoke to him to make sure the first thing he did was defend and help keep a clean sheet. But even in his offensive play he was very good.

“Young Stephen Teggart had a bit of a bug and wasn’t fit to carry on and I thought Conall who came in was terrific as well. He has great pace but he still has a lot to learn in terms of the end product but I thought he came and stretched the play well and could have got himself on the scoresheet,” said Mullen.

Goalscoring chances were at a premium in a tepid opening 45 minutes in which neither goalkeeper had a save of note to make. Newry’s best opportunity fell on 15 minutes when Stephen Hughes found brother Mark in space on the left channel, but he blasted his shot well over.

Cliftonville had the lion share of possession in the first half but the Reds had to wait until the 43rd minute for their first clear cut chance of the game. Former Newry player Stephen Garrett’s corner was headed goalward by Jay Donnelly, but was blocked by City defender Dale Montgomery. The loose ball fell to Conor McDonald, but once again, the Newry defence were quick to close him down and the chance was lost.

The match burst into life shortly after the restart when, firstly, John Boyle rose highest to powerfully steer home Mark Hughes’ free-kick, with the ball slipping through the legs of Cliftonville goalkeeper Richard Brush.

Things got worse still for the visitors 60 seconds later when Jamie Harney was brandished a straight red card for hauling down the sprightly Stefan Lavery just outside the box.

With Newry now firmly in control, Brush was called into action to beat away a Stephen Hughes pile driver from 18 yards, shortly before City substitute Conall Delaney was put in the clear, but opted to lay the ball off when it seemed easier to score.

On 70 minutes, Cliftonville had calls for a penalty waived away when Thomas Maguire’s fiercely hit strike hit the outstretched arm of Darren King. While the visitors sole shot on target in the second half was a weak effort by Jay Donnelly, which Coleman easily collected.

City should really have made their dominance count, with Mark Hughes and substitute Mark McCabe both missing gilt edged opportunities in the final quarter hour of the match.

However, the hosts comfortably held on to the three points - and looking ahead to Friday night’s match against Glentoran, Darren Mullen is hoping for another positive result.

“Consistency has to be the key now,” Mullen said.

“If we keep up that level of performance then we’re fit to give the majority of the teams in this league a game.

“Boyler [John Boyle] is missing on Friday night, he has a wedding to go to, so it’s an opportunity for others to come in. But, as for Dale and Stefan, if you can come in and stick to the tactics then we give ourselves a good chance,” Mullen said.

“But we know it’s going to be difficult. Glentoran have started well, but that result and the performance today should give us confidence.

“We need to be better in our offensive play in terms of keeping the ball because we got ourselves into good positions to score another goal today and didn’t take them so that’s something we need to work on,” concluded Mullen.

Meanwhile in other news at the Showgrounds, City have been drawn at home to Portadown in the third round of the Bet McClean League Cup, with the tie to be played on Tuesday, October 9.

THE Newry City Travel Club bus to the Oval for Friday night’s game against Glentoran will leave the Stone Bridge at 6pm. All are welcome.