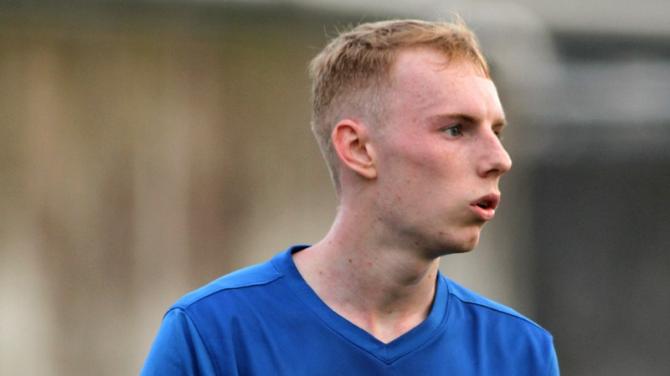 NEWRY CITY manager Darren Mullen cited basic errors as the key factor that led to side’s demise in their 4-1 defeat away to Glentoran on Friday evening.

The Newry defence was unlocked twice in the first half, as goals from Curtis Allen and Robbie McDaid gave the Glens a commanding advantage at the break, before Conall Delaney netted against his former club to halve the deficit for City four minutes after the restart.

At this stage Newry were well on top, but the wind was well and truly knocked from their sails when Glentoran defender Marcus Kane rose unmarked to head in the host’s third goal.

In fairness, there was little Newry could do about Glentoran’s fourth – an outstanding 40 yard strike from substitute Dylan Davidson.

The visitors’ misery was further compounded in the final minute of stoppage time when Stephen Hughes struck a post from the penalty spot. It summed up a frustrating night for Newry, who ironically were the better side for long spells of the game, while Darren Mullen quite rightly felt the score line flattered Glentoran.

“I thought tonight we deserved something from the game. Some of our play was very good and I don’t think 4-1 was a fair reflection of the game,” said Mullen.

“The third goal probably summed up our play, we were good in parts, but if you don’t defend and do the basics then you give yourself no chance. We got ourselves back into it, which was the plan, to get an early goal after half time and put pressure on them - which we did. I thought even after that we pegged them back, but it was a calamity of errors that led to their third goal. In fairness to the lads though they kept at it, but the penalty miss at the end probably summed up our night.”

Newry’s first choice centre halves John Boyle and Dara Noonan were in exceptional form in City’s win against Cliftonville the previous week, but both players were unavailable for selection against the Glens, with Boyle attending a family wedding, while Noonan was ruled out with sprained ankle ligaments. Conor McCaul and Paddy Mooney were recalled to the side to fill the void in central defence and performed admirably, but there’s no doubt that the loss of Boyle and Noonan had a significant effect on the outcome of the game.

Striker Stefan Lavery, who held the ball up superbly against Cliftonville, picked up a hamstring strain in the game and was forced to sit out the match on Friday evening, which paved the way for a return to the starting eleven for Mark McCabe.

When asked about the impact these enforced changes had on the performance, Mullen replied: “When you take three or four players out of our squad like that, it does have an impact and unfortunately it showed tonight. It means we’re down to the bare bones but that’s what your squad’s for. If we can take the good parts out of that game and make sure we defend better then we’ll be the better team for it,” he said.

“There’s no doubt it does disrupt you, because you’re coming off the back of a really good win and you’re hoping to take the same team into the next game and get a bit of momentum going - it was a disruption we didn’t really need. But in fairness to Conor and Paddy I thought the two of them did well. But we need to defend as a team and take responsibility as a team. There were errors further out the field before it even got to our defence, but that’s just the way this league is going to be.

“There’s going to be good days and bad days, but there are certain positives to take out from the game tonight. Coming to the Oval and a lot of our lads haven’t played at this level, though we looked composed at times, but in the final third it was just coming back too easy. We need to hold the ball up there, because if you’re defending well you need a bit of respite at times.”

Both sides were slow to get going in a tepid opening to the game, but it was Newry who were first to register a shot on target on eight minutes. Long-serving Glentoran goalkeeper Elliot Morris, who was incidentally making his 701st appearance for the East Belfast club, was forced into action to save a fiercely struck 20 yard effort from Stephen Hughes. The ball then looped over the body of Morris, but he quickly recovered to scramble the ball off the line.

The impetus was with City, who were playing some slick, stylish and free flowing football. But completely against the run of play Glentoran broke the deadlock on 29 minutes. Ex-Warrenpoint Town midfielder John McGuigan cleverly back heeled the ball into the path of Curtis Allen, who drilled low into the net via the left post, from an acute angle.

The goal swung the momentum of the game in Glentoran’s favour and just three minutes later they doubled their advantage. The Newry defence were slow to react when a long ball from Marcus Kane sent Curtis Allen scampering down the left channel. Allen then pulled the ball back to the inrushing Robbie McDaid whose initial effort hit the post, but he quickly smashed in the rebound.

A deflated Newry tried to force their way back into the game and responded on the stroke of half time when the Hughes brothers combined brilliantly to carve out a chance for marauding right-back Dale Montgomery, but his rasping effort flew into the grateful arms of Elliot Morris.

However, City deservedly opened their account shortly into the second half. Declan Carville leaped like the proverbial salmon to get his head to Montgomery’s inswinging corner kick, nodding the ball down to Conall Delaney, who poked home from eight yards, to the delight of the Newry travelling support on the terracing.

At the other end, the City defence was caught on the hop on 56 minutes, but Conor McCaul recovered with a perfectly timed interception to snuff out the threat from the strong running Curtis Allen.

The hosts were on the attack again on the hour mark, and from a corner kick, Glentoran skipper Marcus Kane rose highest to powerfully head Ross Redman’s delivery past the despairing arms of Coleman, to restore their two goal cushion.

Credit to Newry, they never let their heads drop and went close to reducing the deficit on 84 minutes when Declan Carville blasted over from 12 yards. But two minutes later Glentoran substitute Dylan Davidson all but ended the game as a contest, finding the net with a spectacular strike from all of forty yards out.

Newry were presented with an opportunity to pull a goal back in the last minute of the game when they were awarded a penalty, after Mark McCabe was bundled over in the box. But from the resulting spot kick, Stephen Hughes saw his effort crash off the outside of the left post.

City must now quickly regroup for their visit to Seaview this Saturday afternoon, where they take on Crusaders.

Stephen Baxter’s men were the stand-out team in a glorious 2017/18 title winning campaign. But the Shore Road side have experienced mixed fortunes in their opening five games this season and will be eager to bounce back from their 3-0 home defeat to Coleraine last time out.

City manager Darren Mullen will be buoyed by the return of the inspirational John Boyle for the game. However, Boyle’s central defensive partner Dara Noonan is still recovering from a sprained ankle and is a doubt. Speaking to the Democrat, Noonan said he hasn’t ruled out a comeback for the game but will assess the injury later in the week.

“It’s hard to put a time frame on a return to be honest,” admitted Noonan. “I went to do the warm up on Friday and wasn’t able to kick a ball. But I’ll be seeing the physio a couple of times this week, so hopefully it’s good news come Saturday.”

Meanwhile, Stefan Lavery is nearing a return from his injury and could feature on Saturday, although defender Noel Healy jarred his knee playing for the City U20 side last week and looks set to be out for at least two to three weeks.

Looking forward to Saturday, Mullen concedes that the defeat to Glentoran isn’t the ideal preparation for the match, but the City boss said there were plenty of positives to take from the game, which was in stark contrast to their 4-0 thumping against Ards in their previous away encounter.

“The message to the players after the game tonight was - don’t let it deflate you. Yes, be annoyed and have a look at your own performance. I asked them to go and look at themselves after the Ards game because the manner of that defeat was unacceptable, but I wouldn’t say that tonight. I thought they tried hard but basic errors have cost us. But we’ll get back at it on Tuesday night and look forward to the game on Saturday.

“Playing the league champions away from home is not something to be feared. Yes it’s going to be a difficult game coming off a defeat like that. It doesn’t help in terms of preparation. But at the same time, apart from the first half in the Ards game, I thought we’ve acquitted ourselves well so far - we just need to cut out the basic errors to give ourselves a chance,” concluded Mullen.