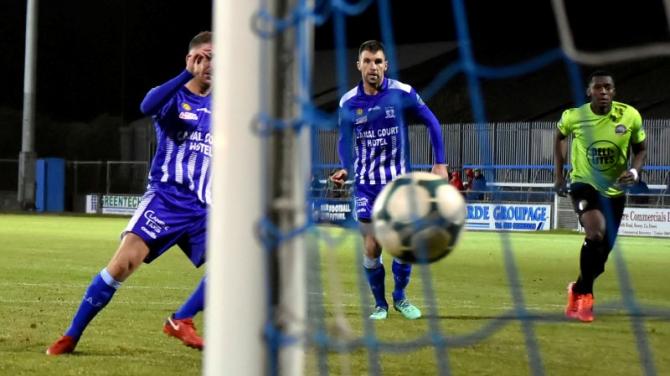 PHILLY Donnelly headed home a last-gasp goal to earn his Warrenpoint Town side a share of the spoils against Newry City in a historic Danske Bank Premiership clash at a packed Showgrounds on Friday evening.

With two minutes gone in the allocated four minutes of injury time, the wee substitute grew in stature to back-head home a Ciaran O’Connor left wing cross and rub out the home side’s 1-0 advantage. This leveller sent the massed Warrenpoint supporters behind the bottom goal crazy as they watched their team battle back to snatch a draw.

It was high-drama stuff and it was the second time in a week that the Seasiders had come back from the dead. Furthermore it must be said the Town deserved their Premiership point – and perhaps more.

This much-anticipated game, the first time two teams from the Newry area had met in a top level match, was a thrilling affair and it kept the massive crowd entertained throughout the 94 minutes.

The visitors were the first to threaten with, on four minutes, Robbie Norton shooting too high following an Eamon Scannell left wing cross.

But Newry were dealt a major blow on 13 minutes when the hugely experienced Darren King had to go off injured to be replaced at left back by Conor McCaul, who incidentally had a great game in an unaccustomed position.

The Town had the best chance in the opening half when, on 20 minutes, Fra McCaffrey raced onto an incisive Eamon Scannell pass and looked a certainly to score - but the midfielder’s shot was weak thus making it easy for City keeper Andy Coleman to smother.

At that stage Newry were looking nervous with the Point keeper Aaron McCarey having little to do.

However, on 25 minutes Decky Carville tested the visiting keeper with a long-range effort while shortly after that Mark McCabe’s left-wing cross was millimetres too high for Mark McCabe.

Still the Seasiders could have gone in front on 29 minutes but McCaul made a brave block to deny Norton.

As the half wore on Newry came more into the game with Thomas McCann and Mark Hughes combining to set up Carville but the big man couldn’t make a telling contribution.

Probably City’s best chance in the opening half came on 35 minutes when the busy Stephen Hughes beat two Town defenders and shot. His drive was deflected with McCarey caught on the wrong foot but the ball narrowly missed the target.

Mark McCabe then raced clear but Emmett Hughes made a tremendous tackle to deny the Newry striker.

The final scoring opportunity of the half came on 42 minutes when Scannell cut in from the left but his parting drive was easy for Coleman.

Warrenpoint had edged the opening half but two minutes after the restart Newry, with Kevin McArdle replacing Paddy Mooney at the break, mined goal-dust. Referee Lee Tavinder adjudged Maxim Kougoun had fouled Mark McCabe and he pointed to the spot. Newry’s regular spot-kick man Stephen Hughes had missed his last couple of penalties so Jimmy Walker stepped up to take the pressure kick. His aim was true with the ball sizzling past McCarey to put the home side in front and give the wee midfielder his first ever Premiership goal.

After that goal the game livened up considerably. On 59 minutes the excellent substitute McArdle set up Mark Hughes who shot narrowly wide. And three minutes later, following a Walker corner on the right, an unmarked Dale Montgomery held his head in his hands as he headed past the post.

John Boyle then made a super tackle to halt the rampaging Danny Wallace, while at the other end McCaffrey had a shot charged down and Stephen Hughes screwed a shot wide after a neat one-two with McArdle.

Into the last 20 minutes with things getting ever more exciting. Coleman scrambled away a header from ’Point substitute Ciaran O’Connor with McCaffrey then blocking a Stephen Hughes drive.

With two minutes of normal time left Warrenpoint increased the pressure on the Newry defence. There were appeals for a penalty as Stephen Hughes appeared to handle but the referee shook his head. At that stage the Point had thrown Maxim Kougoun up front and the big man headed wide on 89 minutes.

It was frantic stuff. The side-line official raised the board on the touchline to say there were to be a four minutes of injury time added. The Point had done the business in those added-on minutes the previous week against Cliftonville. Surely they couldn’t do it again?

But they did. O’Connor crossed from the left with Philly Donnelly, who had replaced Alan O’Sullivan on 71 minutes, glancing a header past the diving Coleman to earn his side a draw. The Point fans went ballistic.

Yet it still wasn’t over. In the last couple of minutes of injury time Newry could have grabbed all three points. First Decky Carville went down in the box with the Newry appeals for a penalty kick ignored. Then in the last seconds of injury time Mark McCabe raced though but the frontman blazed his shot wide.

Perhaps on reflection a draw was a good result for both teams.

And already both sets of supporters are eagerly awaiting another thriller on Boxing Day, this time at Milltown.