Precious points for Newry and Warrenpoint 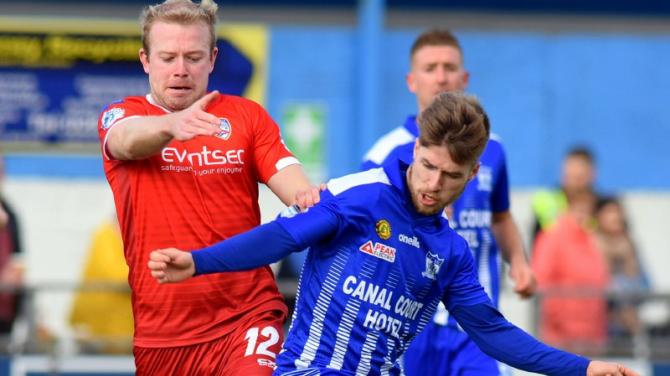 BOTH Newry City and Warrenpoint Town picked up a vital point in their Premiership clashes against Coleraine and Glentoran at the weekend.

Declan Carville gave Newry the lead in the 19th minute against last season’s runners-up but Coleraine dragged themselves level through Aaron Burns’ second half strike.

Meanwhile, 10-man Warrenpoint scored yet another late goal in their fixture against Glentoran at Milltown to secure the point.

Newry City manager Darren Mullen said his side must start picking up points on the road as they travel to the Ballymena Showgrounds this Saturday in what is the Sky Blues’ first home game of the season.

“Some of the results have maybe been a bit harsh on us away from home,” said Mullen.

“But we need to make sure that we start picking up points away from home as well.”

City captain Mark Hughes, who delivered the free-kick which lead to his side’s goal, believes they should have got all three points against Rodney McAree’s outfit but a win this Saturday will be a huge confidence boost.

“It's their [Ballymena’s] first home game of the season so there'll be a big crowd at that, so we're looking forward to it,” he said in his exclusive Newry Democrat column.

“They are only three points clear of us, but they are another good side. It's going to be another tough game.”

Losing the first six games of the season seems like a distant memory at Milltown after a win against Cliftonville, a draw against Mourne rivals Newry and a share of the spoils with Glentoran.

The Point have developed a knack for scoring late goals in recent weeks and Saturday was no different as Stephen McDonnell’s side rescued the point.

Speaking to The Newry Democrat, the Seasiders boss expressed his delight at stopping the rot which threatened to derail their entire season.

“We were worthy of a win - and last week [against Newry],” he said. “But the main thing is that we stopped the rot of defeats. We’ve had four positive results in the last three weeks.

“The guys are really stepping up now. They have a clear understanding of what is expected of them as individuals before they bring it together collectively as a team.

“But it only takes one chink in the chain to break it all down. Yet I think we have them all singing off the same hymn sheet at the moment.”

TURN TO PAGES 48 AND 49 FOR MATCH REPORTS AND PREVIEWS OF THIS WEEKEND’S FIXTURES.