WARRENPOINT TOWN ARE OFF THE BOTTOM 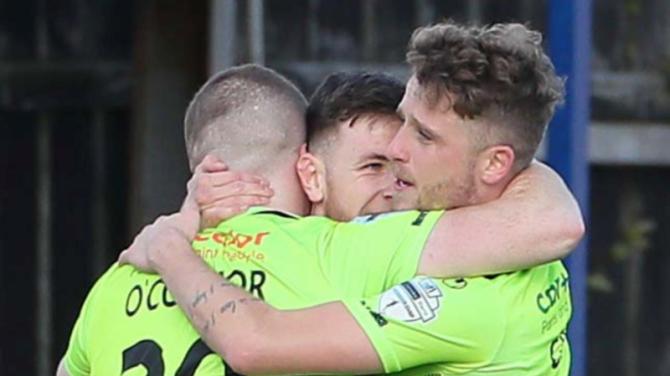 WARRENPOINT Town manager Stephen McDonnell wants his team to make hay when the sun shines after Saturday's win over Dungannon lifted them off the bottom of the Dankse Bank Premiership table.

A Ciaran O'Connor brace gave the Seasiders a 2-0 win over fellow strugglers Dungannon Swifts and with Premiership games coming up against Ards and Institute the Point boss wants his side to build on that momentum.

And McDonnell is delighted to have finally got off the bottom of the table.

“Physiologically it can have a big impact but it something we have been building towards and our performances of late have been outstanding and we probably should have more points to show for it,” said McDonnell.

“But the reality is that we are off the bottom and it is really starting to come together now.

“The important thing is that we have made at start but we have big came coming up such as Ards this week and then Institute at home the following week and these are the games at the start of the season that every club who are down at the bottom end are going to be targeting to get something from and we are no different.

“If we can start to pick up games from those then maybe we can create a bit of a distance and then we have something to play with.

“Because when things don't go so well, because that will happen, there will be another period in the season where it will be sketchy and we need to make the must of the run we are on. And once you start picking up points then we can hopefully create a gap.”

“It has taken us ten weeks to get off the bottom of the table and we are delighted but we have to continue to battle and pick up points.”

Warrenpoint face Dungannon tonight in the Cup and while McDonnell is keen to rest players he would also like to reach the last eight.

“Our lads have put in serious shifts but we will have to use the squad more so now because it is important not to have key players break down with injury so we will rest them, but not all at once. So we will be making a few changes and the League is our bread and butter,”

“That said we will be looking to win and get into the last eight, there is no doubt about that.”

SEE PAGE 48 FOR REPORT AND REACTION.