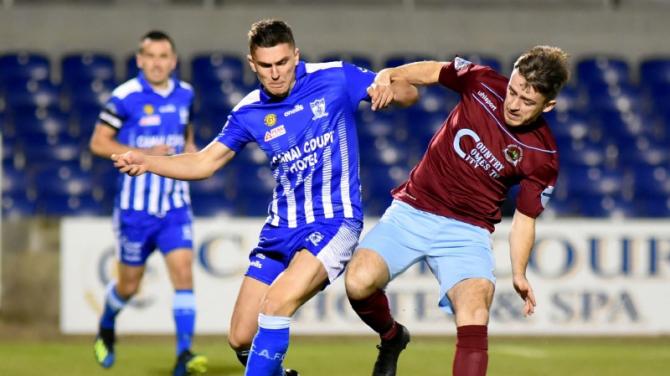 NEWRY City manager Darren Mullen meant every word when he said Friday’s performance was the worst of the season as they fell to a harmful defeat to Institute.

It is the second time the two promoted clubs have met and on both occasions the Derry side has prevailed and if they are supposed ‘six-pointers’ then that’s a 12-point swing in Institute’s favour.

It was a bad day at the office and every team is going to have them but Newry don’t have much time to gather their thoughts as they face Mourne rivals Warrenpoint Town in tonight’s (Tuesday) Mid-Ulster Cup, at the Showgrounds, before travelling to Mourneview to face Glenavon on Saturday (October 27) at 5pm.

“It was our worst performance in a long, long time,” said Mullen.

“We knew the importance of it and it was an opportunity to close the gap on Institute, but I certainly didn’t see it panning out the way it did.

“We started off okay and kept the ball well, but without creating any chances. At this level, especially at home, we have to be creating more.

“We tried three different formations tonight and still didn’t create enough. We gave the ball away too cheaply as well, basic stuff that you can’t do at this level if you want any success. That’s probably the easiest win Institute will get all year.”

It was a tough defeat to take as anything that could go wrong actually did. The two goals conceded were sloppy and when Carville’s powerful header looked to be going in, Mark McCabe glanced it over the bar.

Newry actually started okay as Stephen Teggart went on a run but kicked wildly wide and moments later the cross was too high for Darren King to head at the edge of box, but their opponents didn’t look too sharp up front either.

However, Institute finished the half the stronger side as Joe McCready’s shot on 35 minutes whizzed narrowly over the bar. That was a warning, which Newry failed to heed as in the next ten minutes and before the break Institute went 2-0 in front and it could have been 3-0.

Gareth Brown caught the Newry defence napping and stabbed home on 41 minutes, and 90 seconds later Caoimhin Bonner forced a great save from Newry’s Andy Coleman. But on 44 minutes the Stute went two goals up as Carville’s attempted clearance deflected off Joseph McCready’s face and into the net. It was almost comical but there was no-one laughing in the Showgrounds and it gave Newry a mountain to climb in the second half.

However, there wasn’t that conviction expected as a response and Newry’s confidence visibly waned with every half chance missed.

Captain Mark Hughes shot from 18-yards but it rolled narrowly wide. Then McCabe got into position close to Institute's goal but he blazed wide and the same young player headed over the bar to deny team-mate Carville a goal.

Newry were completely luckless and perhaps didn’t do enough to make their own luck and that’s what disappointed the Newry manager.

“We felt sorry for ourselves and you could see that in their body language after the first goal,” Mullen said.

“It’s a test of character of a team going 1-0 down and we didn’t respond in the right manner. We gave ourselves a mountain to climb. Even in terms of the second half, their keeper maybe had one save to make so we didn’t deserve anything out of it.”

And they didn’t. Institute could have bagged a third goal but Coleman made a great near-post save to deny substitute Callum Moorehead.

With Warrenpoint Town next up tonight, Newry have a chance to restore a bit of pride in the jersey but Glenavon on Saturday has to be a priority. The Glenavon manager Gary Hamilton was taking notes at the Showground’s on Friday and Newry did an excellent job in luring him into a false sense of security. But unfortunately for the Newry boss, his side weren’t keeping their powder dry.

“If I was in Gary Hamilton’s shoes, I wouldn’t be too worried about playing Newry next week,” said Mullen.

“You can’t dress that up any other way, but part of it is how we react. We knew this year was going to be difficult.

I can take, to an extent, getting beaten last week and putting in a bit of a shift, trying and playing some decent football, but there’s nothing positive to take out of this performance.

“If you take tonight’s game on its own, we had too many players who didn’t perform. Sometimes you can carry one or two, but probably only Tucker [Thomas McCann] maybe came out of it with some sort of credit, but other than that, we were poor all over.

“We can’t hit the panic button and, as manager, I’ll take responsibility for any defeat, so I’ll sit down and look at the game again and see what we need to improve on. First and foremost for Tuesday night and then for Glenavon after that.

“There are no easy games for us, but we need to start showing a bit of character. “That’s what we need to see for next Saturday night.

“We’ll go to Glenavon as underdogs, but we’ll go and try to win the game. If the players learn from this evening and respond in the right manner then that’s about all I can ask for at this stage.”

Newry need any sort of goal, be it scrappy or not, to give themselves a boost in confidence.

They are a good footballing side and a positive result over the next fortnight can help them get back on track.