Mullen looks up as club prepares for 100th birthday 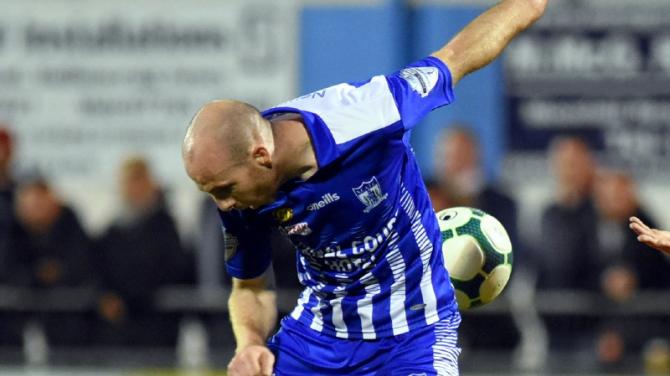 NEWRY CITY AFC suffered heartbreak in the final ten minutes of Saturday’s game against Dankse Bank Premiership table-toppers Glenavon, as they seemed to be en route to picking up their first away point of the season.

It would have been a deserved point as the City side put in their best away performance of the season but Glenavon are leading the Premiership for a reason and their killer instinct matched their hunger with goals from Andy Hall on the cusp of 80th minute and then two minutes later Ben Doherty’s corner stunned everyone in Mourneview when it landed in the net.

It was the sucker-punch Newry could have done without with the team having given a performance they could be proud of. There was also a sour taste left when Declan Carville got his marching orders after picking up his second yellow card late on.

Newry were chasing their first win in October and given Glenavon’s position in the table it was always going to be an uphill task.

But much like when the sides met in Showgrounds in the second game of the season Newry stood toe-to-toe with the Lurgan Blues for much of the contest. It was a massive improvement from the performance against Institute and players such as Jimmy Walker, John Boyle and Decky Carville stood up.

In fact, Carville could have given City the lead on 29 minutes when he had only Glenavon keeper Tuffey to beat after the shot-stopper fluffed his initial attempted clearance from Andy Coleman’s clever long kick but the Newry vice-captain missed the net by rolling his shot low and past his right post.

Coleman again was called upon to deny former Warrenpoint Town striker Stephen Murray from bagging his tenth goal of the season with a great close-range save from the big man's header.

Then at the other end Newry’s Mark McCabe had the chance to give his side the lead but he couldn’t get enough purchase on the ball to stab it home. It’s a goal that is coming for the young striker and Newry need it over the next few weeks.

Newry were holding their own if not creating too much but keeper Andy Coleman was called into action when the lively Josh Daniels rattled the bar and the ball fell to Ben Doherty but the City number one spread himself well to pull off an excellent save.

Newry seemed to have done enough but Glenavon had other ideas when Jordan Jenkins whipped in a dangerous cross, City defender John Boyle made an excellent block from Hall’s shot, but the alert striker followed up to poke home.

It sent the home fans into delirious cheers and crushed the hopes of the Newry City faithful who attended the 5pm kick-off.

With ten minutes to go, Newry had to press forward for the equaliser leaving gaps at the back but it was a slice of horrible luck mixed with a touch of class as Doherty’s corner landed into the corner of the net. It took everyone by surprise and it was a cruel blow to City.

Glenavon could have made it 3-0 but Sykes’ fine strike hit the post.

While Mullen wasn't happy with the ref he was pleased with the performance of his men.

“The lads were brilliant on Saturday, their work-rate and everything and we had a couple of chances to go ahead and we didn't take them,” said Mullen.

“It is difficult enough when the calls are going against you and you aren't being treated in a consistent manner.

“Our home form has been really good, with the exception of Institute, and it gives us an opportunity to get back to winning ways.

“And while it is fine to say that we have been playing well, we got nothing for it on Saturday and we need to start taking our chances in order to turn performances into results.”

Newry can take positives from their performance and they’ll need to as it doesn’t get any easier as they face Crusaders in the Showgrounds on Friday night.

First though is tonight’s (Tuesday) Cup game against Matthew Tipton’s Portadown, which is sure to be tasty occasion and one both teams will be confident of getting a result hopefully remembered for the right reasons this time.

“We are down to bare bones but we will concentrate on what we have and get on with it try and get the win,” said Mullen.

“We know we have two difficult games but we looking forward to them.”

Indeed Friday's game is an occasion to celebrate as the club will be 100-years old. They'll be without the suspended Carville, while Paddy Mooney, Dara Noonan, Conor McCaul and Stephen 'Rambo' Hughes are ruled out with injury.

While the sense of occasion won't be lost on manager Mullen, he wants it to be remembered for a famous Newry win.

“To be playing in the top division in the land against the defending champions 100-years on from the day we were formed is a special occasion,” said Mullen.

“It has worked out nicely and the only thing that could make it even better will be getting the win on Friday night. It is a big occasion for the club but my main aim is to get something from the game.”