Donnelly ensures Point get their Phil at Glenavon 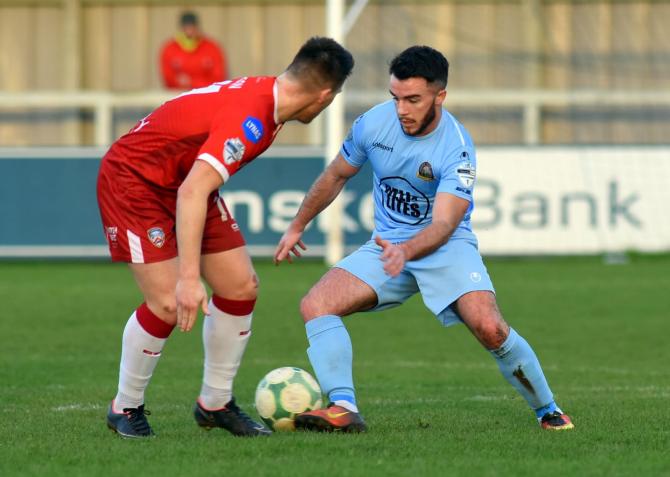 PHILIP Donnelly was the hero for Warrenpoint on New Year's Day.

Stephen McDonnell's side were well worth their 3-1 win - at times it was hard to tell which team was fighting for European football and which was trying to stave off relegation.

Alan O'Sullivan almost put the 'Point into an early lead when his close range effort following a corner came back off the post, only to be cleared.

The hosts felt they should have had a penalty soon afterwards when Rhys Marshall went on a run but fell inside the box, however referee Jamie Robinson booked the Glenavon right back for diving.

Former Town forward Stephen Murray could have fired Glenavon in front when Josh Daniels jinked past two defenders and laid the ball off for the big striker, but he skewed his shot wide of the post.

At the other end there was a good chance for the visitors following confusion in the home defence. James Singleton played the ball back to former Northern Ireland goalkeeper Jonny Tuffey, but following good pressure by O'Sullivan the keeper played it straight to the striker. Singleton did well to recover and block the shot inside the six yard box.

With Aaron McCarey on his way out of Milltown, Berrat Turker was given an opportunity to claim the number one jersey. He pulled off a point blank save to deny Murray, after connecting with Andrew Mitchell's pact cross, around 20 minutes into the game.

Five minutes from the break Philip Donnelly stunned Mourneview Park. O'Sullivan bombed down the right flank, skipped past Caolan Marron, got to the byline and pulled the ball back for Donnelly to fire the visitors in front.

The second half began with Glenavon pushing to get back on level terms. Warrenpoint took advantage as the Lurgan Blues pushed forward to double the lead, O'Sullivan blocking a pass by Marron on the halfway line and finding Donnelly.  He bore down on goal and slotted an easy second past Tuffey.

How Warrenpoint didn't add a third 20 minutes into the second half is beyond this reporter. They broke through the middle, Watterson finding O'Sullivan with Tuffey pulling off a vital save to deny the forward from close range.

They then had the ball in the net five minutes later but that was ruled out for offside.

Donnelly scored his third and sent the home fans for the exits with about 15 minutes left to go. O'Sullivan's shot was parried away by Tuffey but the hat trick hero was on hand with an easy finish.

Glenavon did pull a goal back with two minutes to spare through Daniels who created his chance with some nice footwork inside the box before slotting low past Turker.

* Elsewhere Newry City fell to a 2-1 defeat to Institute at the Showgrounds. Michael McCrudden put Stute into a two goal lead before the break, including a penalty with Dale Montgomery scoring City's goal from the penalty spot six minutes after the interval.