No excuses from City boss 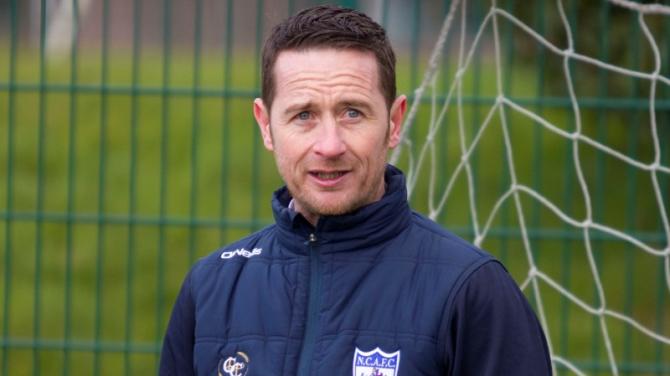 NEWRY City manager Darren Mullen was making no excuses after his side lost 2-0 in the Mourne derby match with Warrenpoint Town at the Showgrounds on Saturday.

He said: “No complaints. You can’t defend like that at any level. In a derby game a team should have to work for their goals. But they didn’t have to work for them. The first one was poor: two versus one and we didn’t deal with it. In the second one there was nobody near their player (Alan O’Sullivan) when the ball came in. He had time to chest it down and pick his spot.

“Poor defending gave us a mountain to climb. In the second half we were a wee bit better but we didn’t create anything so I have no complaints on the result today.

“We played well against Linfield but we didn’t do it today. We just can’t be so inconsistent. We have played well in some games but we have played poorly in the ones that matter. The two home games against Institute and the match here today were games we had to be winning. There are only so many excuses we can make.”

Mullen then spoke of Newry’s struggle to stay in the Premiership, saying: “We are fighting a relegation battle and we can’t keep depending on Ards to get beaten to keep us off the bottom. Some week they are going to start winning and we are going to be left there.

“The end goal is to stay in the league. And if we can do that we will be a lot better, both mentally and physically for it. It’s tough at the minute.”

“It was basic stuff – giving the ball away in the first half. It’s different if you get beaten by two worldies but the goals we conceded were shocking. The goals were poor mistakes on our behalf. It wasn’t that we were set up in the wrong shape. It was down to individuals taking responsibility for their defensive duties and dealing with it. We didn’t do it and got punished for it. No excuses – we just weren’t good enough. Warrenpoint deserved their win.”

On restoring the team’s confidence for Glentoran on Friday night at the Showgrounds, the City boss said: “It’s easy to hide and see the season out and take whatever comes our way. But we are now in a battle … and a mental battle as well. It can be difficult to lift lad’s spirits and there is only so much I can say. But I have every faith in this group of people. They will turn it around.

“It’s different if we were playing like that every week but we have it in us to play a lot better than we did today. Should we go to the last game of the season, in whatever format – play-offs, whatever it is, we’ll be ready for it. The last thing we want to do is to go down without a fight. That fight has to begin on Friday night.

“I’ll not make any excuses. As manager I’ll take full responsibility for where we are. It’s up to me to go out and win games. So Friday night takes on huge importance. It’s a game we need to be ready for.

“We played pretty well against Glentoran in the first half recently but conceded sloppy goals. We have to be sure we cut out the mistakes and, whatever chances we do get, we need to take them. We’ll be ready for Friday night’s game,” concluded the Newry manager.