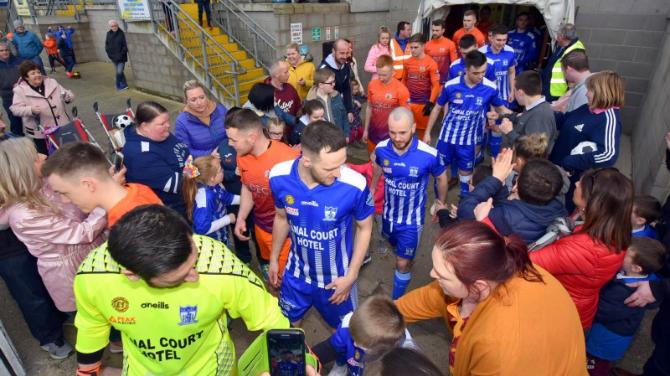 DARREN Mullen was pulling no punches after watching his side go down 1-0 to a late Glenavon goal at the Showgrounds on Saturday evening.

After this last Danske Bank Premiership fixture before the league splits into top and bottom sections, the City boss spoke grimly: “I could say hard luck but I won’t, because it wasn’t good enough. That’s the bottom line. And it hasn’t been good enough. Basic stuff is killing us. We’re not keeping the ball.

“It alright saying we’re working hard and defending well. But we shouldn’t have to work so hard and defend as much as we’re doing. We’re giving ourselves mountains to climb.”

Newry might have picked up a vital Premiership point right at the death but the Lurgan Blues’ keeper Jonathan Tuffey foiled Decky Carville who was one-on-one with the net-minder.

Darren Mullen spoke of that clear opportunity: “The chance at the end probably summed it up. You have to take those chances. In fairness to Decky he worked hard. But the quality around him was poor.

“We didn’t hold onto the ball. When we’re defending like that and Glenavon are playing a high line, something we worked on this week, you have to give yourselves an opportunity to break that.

“First and foremost it means keeping the ball and we didn’t do that this evening. I have to say I’m disappointed in the quality of a lot of our play. We just haven’t been good enough.

They were missing two of their centre backs, which we spoke about before the match. The two Glenavon lads up front caused us problems and it’s up to us to cause them problems at the other end where they are missing players. Apart from Decky’s effort I don’t think Tuffey had any saves to make. It was poor and we didn’t deserve a lot out of the game.”

In truth Newry did graft away and on that subject Darren said: “I expect more than that. I expect players to show their abilities. During our training we play possession football, keeping the ball. But when we go to play games we give the ball away far too much. And we have been punished for it right the whole way through the season.

“It puts your defence under pressure. Dara (Noonan) maybe committed himself for the goal but before that he made a couple of great interceptions. It’s unfair to the defence and Andy (Coleman) that they are under that amount of pressure. They need an outlet. They need people to hold the ball to give them a bit of a break. But it doesn’t happen.”

With their relegation rivals Ards picking up a point against Crusaders (and it might well have been three), before City kicked off at 5.30pm, the pressure was on to win against an injury-hit Glenavon. Indeed local Newry lad Caolan Marron, apparently under the English Premiership microscope, was unable to play for the Lurgan Blues because of a broken toe.

And the home side began brightly with Tiarnan Rushe curling a 20-yard freekick narrowly past the angle in the opening minute. But then the visitors took control and it needed keeper Andy Coleman, along with his defensive central pairing of Paddy Mooney and John Boyle, to be in top form to deny the Lurgan Blues.

Giant striker Andy Mitchell brought a great finger-tip save from Coleman on 15 minutes with a shot-centre from way out on the right flank while Mitchell was inches wide with a 25-yarder on 26 minutes. However, the best chance of the half fell to Conor McCloskey on 36 minutes when he broke clear of the City rear-guard. But Coleman denied the Glenavon striker when he raced off his line to make a brilliant block.

Meanwhile the only real scoring chance of note at the other end came on 17 minutes when Stephen Hughes played in Decky Carville but the big man was too high with his parting drive.

Newry played a lot better in the second half and could have gone in front on 55 minutes. Carville centred from the right with the inrushing Rushe getting in a powerful header but it was just too high.

Again City had another chance on 69 minutes when after Mark Hughes and Tiarnan Rushe combined, Stephen Hughes had a drive deflected over the bar. While five minutes later Stephen Teggart dragged a low 20-yard effort wide.

As the match edged into the last 15 minutes, hopes were high that City could pick up a vital point. But on 78 minutes those hopes were dashed. After substitutes Dara Noonan and Pablo Cavalcante de Andrade got in each other’s way, a Glenavon head found Stephen Murray down the left and the former Warrenpoint player’s cross was meat and drink for Andy Mitchell who gave Coleman no chance with a thumping header that rocketed high into the net.

In the final ten minutes both sides had opportunities to score. Coleman saved to deny Mitchell grabbing a second with a smart stop while at the other end Noonan headed a Taggart corner over the bar.

However, Newry had one mighty chance to snatch a Premiership point. On 91 minutes Stephen Hughes played in Decky Carville who was clean through on goal. However, Jonathan Tuffey became his side’s saviour when he darted from his line to block Carville’s goal-bound effort.

It was yet another devastating defeat for Darren Mullen and for the staunch City supporters. The team now sit at the base of the Premier League in the relegation spot, two points behind Ards (with an inferior goal-difference). And realistically Ards are only team they can catch. Five games are left for Newry to finish above their relegation rivals and make that play-off spot.

The teams meet on Friday, April 5 at the Showgrounds (Newry’s next match). It’s the first of the Bottom Five games and nobody is in any doubt of the importance of this clash.

Indeed no one knows this better than Newry boss Darren Mullen who said: “I’m not happy about how we played today but we need to beat Ards. We know what we have to do. We will be playing teams in and around us. And if we can’t beat the teams in and around us then we don’t deserve to be in this league.

“There are no excuses and I have never made any excuses. Everyone knows how important this game is. They (Ards) are probably saying the same thing as ourselves. Some players have risen to the challenge in this league while others haven’t. The table doesn’t lie.”

Mullen then issued a dire warning to his players as he said: “The team that starts against Ards certainly won’t be the team that started today. I have told the players there will be changes. I have been fair to everybody and given players chances throughout the season. Anybody who does not start (against Ards) will have no complaints. We have to be ruthless. It’s a time for players to stand up and be counted. You can bemoan your luck to an extent but when you make your own problems, there’s very little you can argue about.”