Relegated Newry can learn from season in top flight 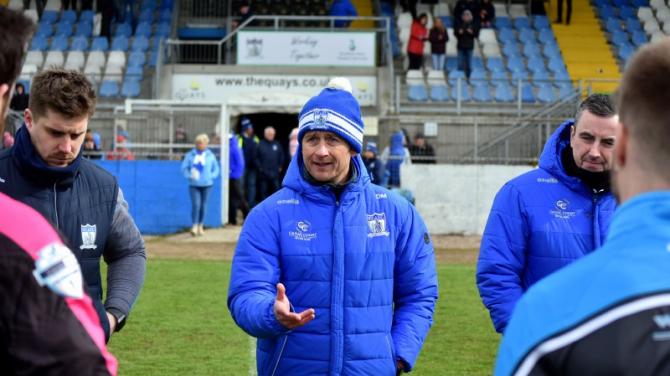 SATURDAY was a sad day at the Newry City Showgrounds as the home team went down 1-0 to Dungannon Swifts and in doing so lost their Premiership position.

Although in truth it was a huge ask for City to avoid relegation, as not only did they need victory, and possibly victory by a few goals against the Swifts, but they also needed a massive favour from neighbours Warrenpoint Town to stay in the big league.

The Point drew 1-1 with Newry’s relegation rivals Ards. But it wasn’t enough and so, after just one season in the top flight, Darren Mullen’s side will play Championship football next season.

The man himself spoke after the match and he spoke honestly, not shirking any issues, while his players were applauded off the pitch by the fans.

“The game today was probably a fair reflection on our season – ok in parts but ultimately not good enough. We just lacked that bit of quality. It’s been a common theme throughout the season. We just haven’t been good enough. And as manager I’ll take responsibility for that. It’s just a case of taking it on the chin, re-grouping and going at it again next year.

“We’ve had a terrific journey and it’s well documented. There is maybe an argument that maybe we came up (to the Premiership) a bit early but it’s been a terrific learning year for the club.

“Financially, the structure, the new academy, indeed everything about the club is a lot better. We had to learn both on and off the pitch and it’s been a great learning experience – for me personally as well. We will learn from the mistakes we made and hopefully push on next year. I’m sure we’ll go into the Championship as one of the favourites but we know it’s a really difficult league. You only have to look at Carrick and Ballinamallard and how they have re-acted to relegation – one in the play-offs and one in the Irish Cup Final. We hope to follow their lead.

“Today was a difficult day and it will hurt for a while but we can’t feel sorry for ourselves; we just have to dust ourselves down and get back at it.

“It’s been a long week. The defeat on Tuesday night (against Institute) was difficult and we didn’t help ourselves. If you don’t win your games in the split – and if we can’t beat the likes of Institute and Dungannon, then we don’t deserve to be in this league. And ultimately we have just fallen short. We just haven’t been good enough this year.”

Incidentally before last Tuesday’s match against Institute, Darren had to make the difficult decision to drop three of his better-known players – for indiscretions. And on two of them (Decky Carville and Stephen Hughes) the City manager said “They won’t play for the club again.

“But I would rather concentrate on the lads that finished the season. I thanked everyone of them for their efforts. Maybe we lacked quality or whatever, but I can’t fault them for their effort or their attitude. Those lads have never given me any bother. They’re a good bunch of lads. I’m gutted for them.”

To Saturday’s game against Dungannon Swifts. Nothing really happened for the first 25 minutes but on 26 minutes Mark McCabe had a shot charged down following a right wing Tiernan Rushe corner kick. There were appeals for a penalty kick but referee Ian McNabb wasn’t impressed.

Meanwhile at the other end Andy Coleman saved brilliantly at the feet of Jonathan Lafferty with Ben Gallager shooting narrowly wide two minutes later. Towards the break Newry had a few half chances. Stefan Lavery had a shot blocked down, John Boyle headed over a Rushe corner and Mark McCabe brought a full stretch save from Evan Morgan the Swifts’ keeper.

News from Milltown came through that Ards were leading 1-0 at the break and if that wasn’t bad enough three minutes into the second half at the Showgrounds Ards edged in front. Paul McElroy shot from the edge of the box with his drive deflecting off John Boyle and past Andy Coleman.

Still even with a goal in arrears and playing against a hurricane-like breeze, City kept pressing, kept pushing forward. The excellent skipper Mark Hughes had a shot charged down, Dale Montgomery shot straight at the Dungannon keeper and Hughes (again) had a wicked left-footer well saved by Morgan.

But it wasn’t to be. And as full time approached that minor miracle that all Newry fans were hoping for didn’t materialise.

Darren Mullen summed up the feeling of dismay at the Showgrounds, saying: “I feel sorry for the fans, the players and the staff. I can’t fault them for effort. It’s tough, but that’s football for you.”

When it was put to the manager that his players worked hard he replied: “They did but at this level, it’s about quality. And we have just fallen short there.

“But I’m hoping that some of those young lads will learn from a year at this level and will be better for it next year.”

On his own performance Darren said: “Nobody will have been more critical of me than me. If I thought for one minute that someone could come in and do a better job, and take the club back to the Premiership, I’d be the first to hold my hands up.

“I still have a serious amount of energy and time to give to this club. People can sometimes forget what you have done in the previous four or five years. People are quick to judge at this level. But I understand people questioning me. That’s part of football.

“When you’re relegated the first person people look at is the manager and I will take full responsibility for relegation. The flip side is that I will work even harder next year to make sure we get back to the Premiership.

“There are things I need to learn from, such as recruitment. That needs to be better.

And some of our players are small and physicality has been a big issue. That will be looked at – along with quality. However, that’s going to be difficult because of the market we’re working in, the finances and who’s out there.”

Darren continued: “Speaking to some of the top managers in the Premiership, the players just aren’t out there. They have to look in Scotland and other places. So for me to find players that will improve us is going to be very difficult.

“Still that process has already started. And I’m hoping that we can bring players in that will take us up to the level where we’ll be contenders for promotion next year.”

The city boss concluded by saying: “We’ve had some really good results, some great memories but consistently we haven’t been good enough … and we paid the price.”