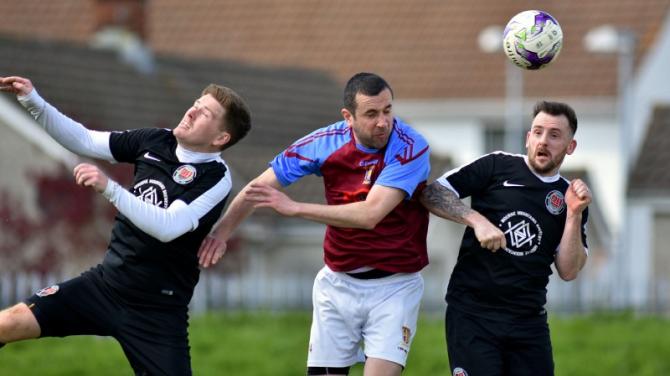 THERE’S an old saying about buses; that you wait ages for one, but then three come along at once.

Well for the opening 32 minutes of the AOH Cup second round clash between Villa Rovers and Rossowen, neither team was able to break the deadlock. Yet unbelievably, the sides went in at the break level at three apiece following a whirlwind 13 minutes of thrill-a-minute football.

The Carnbane League Premier Division rivals continued to trade blows in the second half, with the scoreline locked a 4-4 after the 90 minutes, but in extra time Villa added a further two to their tally to book their place in the quarter finals.

Rossowen were the quicker of the two teams out of the blocks and two minutes in, ace marksman Sean Gorman was the first player to test Villa keeper Stephen Ogle with a speculative effort from twenty yards. The busy Gorman threatened again on 16 minutes when he found a little pocket of space in the box, turned, and fired in a fierce shot, which Ogle did well to get a hand to and turn round the post.

Rossowen continued to look dangerous going forward and might have taken the lead midway through the half, when Gorman was thwarted by a timely last ditch Mark Lennon tackle. Soon after, the visitors were in again, but Ciaran Bradley failed to find the target from close range.

Despite the Rossowen dominance, it was Villa who opened the scoring on 33 minutes, when the strong running Niall Devlin burst into the Rossowen box and smashed an unstoppable shot past John Parr. The lead was to be short lived though, as two minutes later a Gareth Clarke header restored parity for the Rostrevor men.

Kyle Brennan forced the ball over the goal-line to edge Villa in front again and the Villains looked on course for a healthy 3-1 half-time advantage when Niall Devlin finished off a clever through ball by Anthony Donaldson. But Rossowen rallied in first half injury time, when, firstly Kevin Maxwell’s deflected strike found the back of the net to reduce the deficit to a single goal, before Adam Morgan put Ciaran Bradley in the clear, and he finished with aplomb to leave the sides all square.

Villa looked the more likely team to add to their account in the early stages of the second half and their sustained spell of pressure paid off on 55 minutes when they won a penalty kick, following a foul on the rampaging Niall Devlin. Central-defender Kyle Reid made no mistake from the spot, to edge Villa into the lead for the third time in the game.

But back came a determined Rossowen to level matters on 70 minutes. Danny Magill was upended on the edge of the Villa 18 yard line and from the resulting free-kick, the talented Sean Parr buried the ball into the back of the Villa net.

Both teams threw caution to the wind in the final 20 minutes of the half and Stephen Ogle had to be on full alert to keep out David Magill’s stinging free kick in the 77th minute. While at the other end, only a timely last gasp tackle by Cormac Markey on Devlin prevented Villa from getting their noses in front.

Desy Kavanagh’s whistle signalled the end of normal time – with twenty minutes remaining of extra time for either side to grab a winner.

Three minutes into extra time Villa nudged themselves in front when the combination of Brennan and Devlin paid dividends – the fiery Brennan storming past two Rossowen defenders, laying the ball off to Devlin who somehow managed to poke the ball into the net.

In the ninth minute of extra time Villa were awarded their second penalty of the game after Daniel McGuigan was fouled in the box. Up stepped Kyle Reid again to coolly slot in from 12 yards and leave Villa with a commanding two goal lead.

Rossowen couldn’t find a way back in the game in the second period of extra time, leaving Villa to progress to the quarter finals, where they will meet Rockview United.