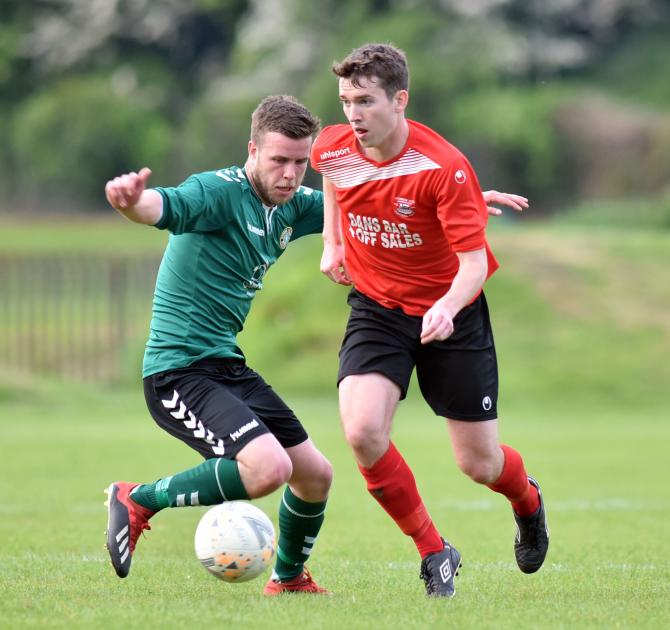 BESSBROOK United have an opportunity to complete a Carnbane League domestic treble after beating Newry Celtic in the AOH Cup semi-final in midweek, writes Gerry Patton.
Having accepted the IFA decision to throw them out of the Junior Cup Final, there will be few who bet against the south Armagh side picking up another trophy.
Right from the start Celtic took the game to the Brook and after five minutes created their first chance when Stephen Wylie turned his marker and unleashed a fierce drive which was well saved by Conor Ruddy.
Bessbrook weathered the early storm and came close on 15 minutes when a Lee Fallon cross found the head of Ryan O’Hare but his close range header sailed over the bar.
At this stage Celtic were dominating and on 25 minutes a Dean McConnnell headed a flick-on found Fagan who had only  the keeper to beat but Ruddy managed to hack away with his feet. When the ball fell to Wylie he blasted wide.
The Newry side kept pressing and five minutes later they came close when a Gavin Moan free kick was only inches wide and almost immediately Stephen Laurie saw his angled drive saved by Ruddy.
It was obvious Bessbrook’s long season was beginning to take its toll as they as they could hardly string two passes together.
With half time looming they managed to conjure up a chance when Monaghan dispossessed the keeper but his overhead attempt looped over the bar.
In the last two minutes both sides struck the wood work when Celtic’s Laurie found the outstretched leg of Wylie but his effort clipped the crossbar.
Seconds later Ryan O’Hare laid the ball off in to the path of Lee Fallon who let fly from all of 25-yards but his block buster crashed off the post.
In the second period Bessbrook came out of the blocks the quickest with a superb left footed volley from Lee Fallon producing an equally great save from Barry McParland.
On 55 minutes Celtic really should have gone ahead when a defensive blunder allowed Josh McKeown to break clear but Ruddy stood tall to deny him with a point blank save.
After that Bessbrook began to get to grips with the game and had great chance when Karl McVerry calmly set up Ryan O’Hare but his scuffed effort was easily gathered up by McParland.
Minutes later Lee Fallon looked odds on to score but a superb last ditch left him holding his head in frustration.
On the hour, Bessbrook’s DJ Hughes was introduced to the fray and he impacted immediately when his close-range drive was hacked off the line and when the ball fell to Conor Sloan and he wasted no time drilling it past several players and into the net.
The Brook could have increased their lead moment later when Stephen Matthews played a neat one two with Karl McVerry but his parting drive was superbly saved by McParland.
Celtic pressed hard for the equaliser but a mixture some last ditch clearances and some great tackles kept them at bay.
In the last minute there was an almighty scramble around the Celtic with great chances falling to TJ Hughes and Decky Monaghan both were hacked away.
Bessbrook now contest both the Father Davies and AOH Cup Finals.