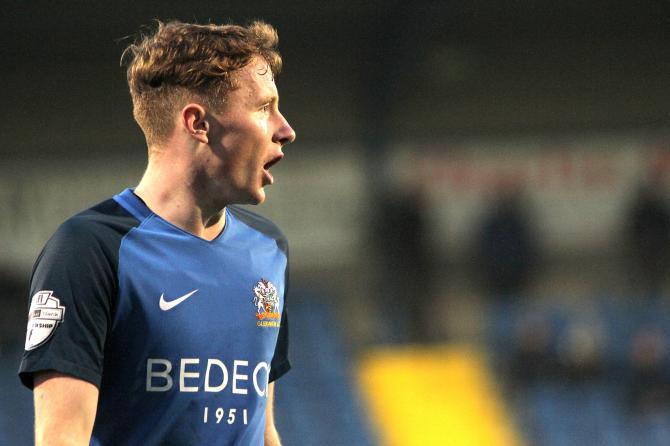 CAOLAN Marron has been selected for the Northern Ireland U21 squad to play England at St George’s Park, the official England training camp and Centre of Excellence at Burton-on-Trent.
The squad leave on June 2 for a three-day training camp at St George’s before facing the high-profile young English team in a challenge match.
The 20-year-old Newry lad, currently playing his football with Glenavon in the Irish League, had a season to remember. Caolan, from Altmore Gardens close to the top of Barcroft, has won both the Ulster Young Player of the year and the Glenavon Player of the year awards.
But he was overlooked for recent U21 internationals against Mexico and Bulgaria. Paul Millar, the former assistant manager at Glenavon, was annoyed that the Newry lad didn’t make Ian Baraclough’s U21 squad for those challenge games, Millar raging: “I cannot believe Caolan has not been called up into the Northern Ireland under 21’s. I think he’s the best young centre-half in Ireland, not just Northern Ireland.”
Caolan, who began his football career as a five-year-old with the Meadow-based side Midway United under Dessie Murphy, has also played gaelic football with St Paul’s School, Bessbrook and with Corrinshego in the Armagh League.
The athletic central defender is quick, can tackle, has two good feet and is comfortable on the ball. Caolan has always worked hard and thus proved that dedication and perseverance can pay off.
In his three years with the Lurgan Blues the Newry lad has played for Northern Ireland U18’s and U19’s and has now made the U21 squad.
Glenavon first team boss Gary Hamilton is one of Caolan’s biggest fans, saying: “Caolan cruises through games. I can’t sing his praises high enough. The one thing I will say if he keeps his feet on the ground, he has the potential of playing across the water.
“There are very few centre-halves who are as strong in the air, can run and keep the ball. He has every attribute you would want in a centre-half.”
Speaking to the Democrat Caolan said: “I’m delighted to have been selected and my aim now is to become a permanent fixture in the team.”
And with his skill, pace, strength and his burning will to win, you can just bet Caolan will achieve that aim.