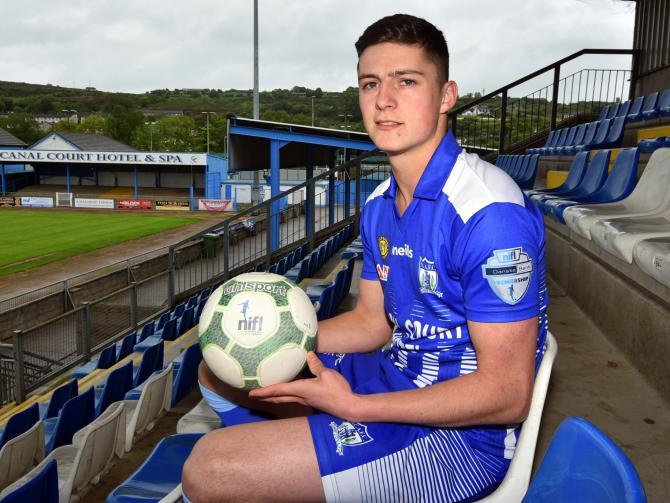 NEWRY City AFC are delighted to welcome striker Stephen McCavitt on a year-long loan deal from Glenavon FC.
Newry manager Darren Mullen made no bones about needing a player up front considering defender John Boyle was joint top scorer in the Premiership for the club with four goals, along with Stephen Hughes and Mark McCabe.
“Our lack of goals last season cost us dearly so it’s an area that needed immediate improvement,” said Mullen.
“Stephen will be the first signing in that area and I’m delighted to get the deal done. We’ve known about him for a while especially after scoring a screamer against us in the Mid-Ulster Cup Final a few years ago.
“He joins us after finishing top scorer in the Premier Intermediate League so I’ve no doubt he’s ready for the step up.
“I know there were numerous other clubs interested in him but he has shown an obvious desire to play for us. I’d like to thank Glenavon manager Gary Hamilton for his help with this deal.”
McCavitt finished BlueFin Sport  Intermediate League top scorer with 14 goals for   Banbridge last season and with Mark McCabe being top-scorer in the Championship in the 2017/18 season, Newry should  from the competition for places up front.
McCabe has yet put pen to paper and should he choose to look elsewhere then McCaviit may be need to step up.
On loan from Glenavon, McCavitt can play up front or in on the wing and he will give Newry options in attack and he is glad to have signed a deal at Newry.
“I am happy to have signed for Newry City and can’t wait to get going at The Showgrounds,” McCavitt said.
“I was delighted when I got the phone call from Darren [Mullen] asking did I want to come down and play at Newry. I look forward to meeting everyone and hopefully I can score goals and do well at this great club.”
McCavitt joins former Warrenpoint Town captain and Newry Celtic star Stephen Moan as most recent signings at the Showgrounds, while a host of players, such as defender John Boyle, captain Mark Hughes, Darren King, Stefan Teggart, Noel Heaney and Dale Montgomery have all agreed to stay on board as Newry push for promotion back to the Premiership next season.