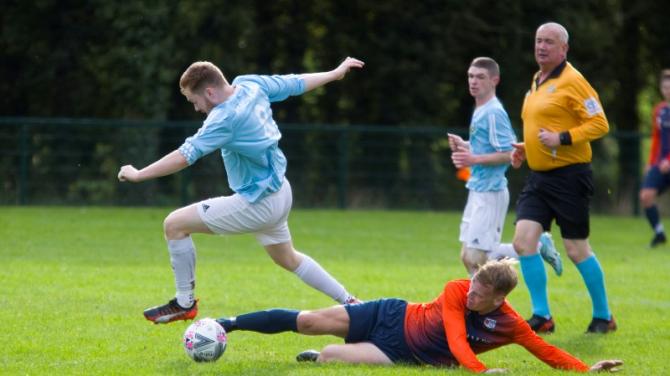 VETERAN marksman Liam McCartan struck a superb hat-trick of headers for Windmill Stars Reserves as they sealed their passage into the third round of the Mid-Ulster Shield after seeing off the challenge of Ballyholland FC.

The match was a scrappy affair for the most part, but that extra bit of quality which McCartan provided for the Stars on the day proved to be the difference between the teams. Johnny Campbell, Jay Kelly and Aaron Anderson were all excellent for the Stars also, while Frank McArdle, Liam McKevitt and Niall Carr impressed for Ballyholland.

Ballyholland skipper Mark Finnegan opened the scoring for the Carnbane League men with a clinical drive inside the box after fifteen minutes.

But Windmill quickly responded, to level proceedings. Following a great piece of individual play by Allen Horridge, his in-swinging cross was powerfully headed home by McCartan.

Windmill’s tails were up and three minutes later the Church Street side took the lead in the most direct fashion. Eoin Flynn latched on to goalkeeper Paddy Hearty’s long punt up the pitch and the speedy Windmill striker raced clear, before rifling the ball low past McEvoy from 15 yards.

Midway through the half Johnny Campbell went close to extending Windmill’s advantage when his deflected strike from just outside the box flew narrowly wide of the upright. While at the other end Ballyholland’s only other chance of note fell on 29 minutes. Niall Carr floated his corner kick towards the back post, but the inrushing Stephen Lowry blasted wide from the narrowest of angles.

Ballyholland struggled to build any sort of momentum. On the left wing the busy Frank McArdle provided a threat going forward, but strikers Mark Finnegan and Stephen Lowry were well marshalled by the Windmill defence.

Windmill were enjoying the lion’s share of possession in the middle of the park, with the experienced Johnny Campbell pulling the strings there. Up front, Liam McCartan kept the Ballyholland rearguard on their toes and three minutes before the break the former Parkview ace bagged his second of the game. Jay Kelly swung in a great cross and that man McCartan steered his header past McEvoy, to give the Stars a commanding 3-1 half-time lead.

The next goal in the match was always going to be crucial although chances were at a premium early in the second half. But, on 63 minutes, Windmill increased their lead with the first clear cut opportunity of the half. Once again it was Jay Kelly who provided the delivery for the lethal McCartan, who timed his leap to perfection, before heading home to complete his hat-trick.

Ballyholland never really looked like finding a way back into the game, although substitute James Keenan did provide them with a modicum of hope, when he found the back of the net with a sizzling strike from outside the box on 87 minutes.

Paddy Hearty will have been disappointed to let the shot slip past him, but the Windmill custodian quickly redeemed himself in the last minute of the game with a terrific point blank save to keep out Brendan Mackle’s stinging drive.

It was job done for The Stars and they now eagerly await the draw for the third round of the Shield, where they join fellow local sides Millburn United, Ballybot United, Cartwheel United and Rossowen, who all won their second round ties at the weekend.