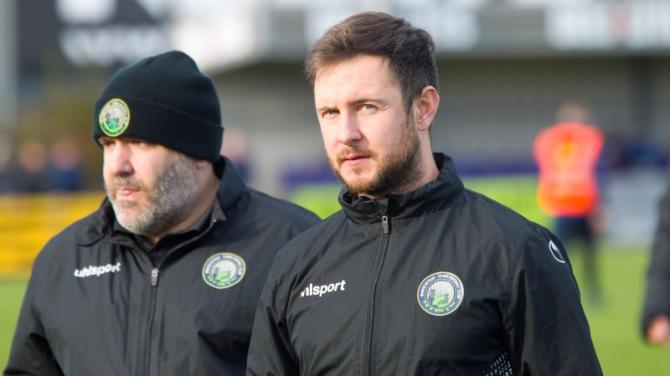 The club made the announcement in the wake of Tuesday's 7-0 thumping by Linfield at Windsor Park.

That was the side's 11th defeat in 12 matches in the Irish Premiership this season.

The club have agreed terms with Barry Gray to take on the management affairs of the senior team.

"Warrenpoint Town and Stephen McDonnell have parted ways," the club said in a statement.

"We thank Stephen for his time here at Warrenpoint and wish him all the best for the future."

McDonnell, who had spells at Celtic and Dundalk as a player, became interim boss at Point when Matthew Tipton left to take over at Portadown.

They finished 10th last season in what was McDonnell's first full campaign in charge, and they also reached an Irish Cup semi-final, losing to Championship outfit Ballinamallard United.

They began this season by losing their first eight Irish Premiership matches before securing a tense 4-3 home win over Dungannon Swifts earlier this month.

However, two more defeats followed before Tuesday night's heavy loss to the current champions, which leaves them two points behind second-from-bottom Institute.

"I'd like to thank all involved at Warrenpoint Town for the opportunity to manage the football club and for the many roles I fulfilled over my three and a half years at the club," tweeted McDonnell.

"It sure has been a fantastic journey with lots of positives for me to take moving forward in my career.

"I wish all the players the very best of luck moving forward in their careers.”