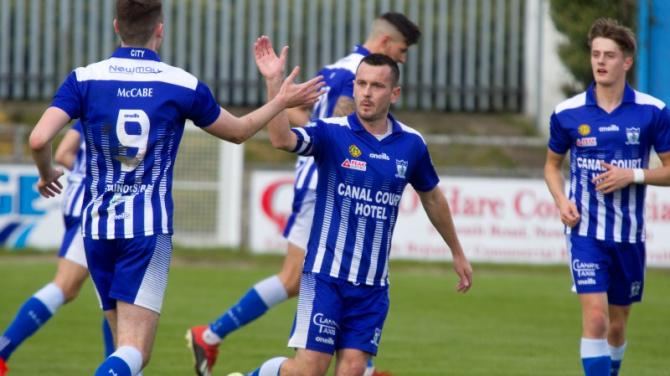 NEWRY City have continued their recent impressive winning spell by putting PSNI to the sword at the Dub.

The result moves City into fourth spot in the Championship table and their sights are firmly focused on catching the teams above them and leave themselves in with a chance for promotion before the business end of the season.

Six goals is impressive scoring and Darren Mullen’s men seemed to have found their stride at the right time.

Newry face third-placed Ballinamallard at The Showgrounds on Saturday (October 26) at 3pm. The Mallards are only four league points ahead of City and a win for Newry would be huge.

First though Newry travel to Mourneview Park on Wednesday night in the Mid-Ulster Cup, where they will be confident of getting a result against Glenavon, although the Lurgan men will be content too following their 3-1 win over Warrenpoint on Saturday.

“Darren has done a really good job in Newry over the years and he has got even a stronger team this year than he had last year and he has brought in some really good footballers,” said Hamilton.

“They will be no easy task and we know it will be difficult.

“Three games in a week might be too much, but we are not worried about Crusaders at the weekend we are more concerned about Newry on Wednesday night and that is first and foremost.”

But back to Saturday’s wonderful win and Newry captain Mark Hughes might have opened the scoring as early as the fifth minute, but PSNI keeper Daniele di Giorgio saved the penalty awarded after Owen Moody handled in the penalty area.

Newry dominated the opening exchanges and eventually did break the deadlock on 14 minutes through Mark McCabe's header after a cross from the right found him free at the far post.

Despite enjoying the lion’s share of possession and chances engineered, Newry had to wait until eight minutes into the second half to double their advantage when McCabe laid the ball off for Stephen Moan to find the net from the edge of the six yard box.

Then, just a minute later, Adam Foley won possession before playing McCabe through to add a third for the visitors, again on the edge of the box.

The floodgates opened, and Newry's fourth came just after the hour courtesy of Darren King's close range finish after Foley had flicked on Dale Montgomery's throw-in.

It was 5-0 three minutes later, Hughes making amends for his earlier penalty fluff with a clinical finish from Foley's lay-off.

Reece Whittle pulled one back for the PSNI with 20 minutes left when he rose highest to power a header past Andy Coleman but, two minutes after that, Foley restored Newry's five-goal cushion with a finish into the empty net after McCabe had done well to create the opportunity.