This one tops the lot says Daly 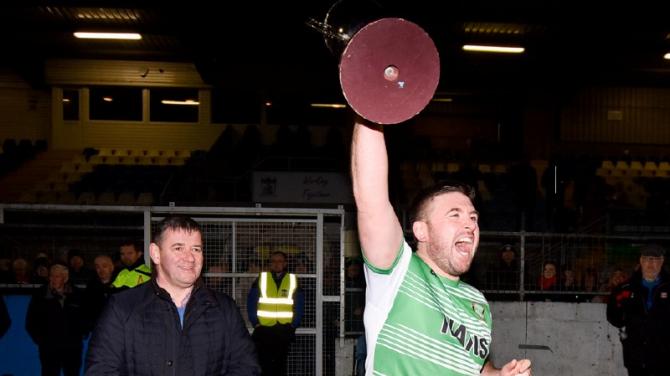 “I’m absolutely over the moon, I think, of all the cup finals I’ve been in, it’s the greatest win of the whole lot of them,” said a proud Daly after the final whistle.

“We were written off all week. We saw earlier the bookies were taking bets and we were 3 to 1 outsiders. They were talking about how many Decky Monaghan was going to score and that geed us up even more.

“But we knew from the first whistle we were going to win this game tonight. We didn’t get too many shots away in the first half but Larry [Griffin] said to us at half time, just have a go, have a shot and see what happens.

“So we’re delighted. Regardless of them going down to men, we were the better side and I thought we deserved to win it.”

“Was it a cross or a shot? I’m not sure,” joked Daly. “He’ll say it was a shot but I don’t care how they go in. Davy McKevitt could have made it easier there at the end but we’ll forgive him for that as long as we got the trophy.”

The Celts had several stand out performers on the night, including the likes of Colm Fegan, whose agility and shear doggedness was key to paving the way for the comeback.

Gavin Moan, Ronan Byrne and Ronan McGrath were resolute in defence. The tenacious Paul O’Rourke epitomised Celtic’s never-say-die attitude, with an outstanding display at full-back, while the midfield and forwards worked their socks off.

Daly was delighted with the collective performance though and reserved a special mention for stand-in goalkeeper Kevin Marks, who did a sterling job filling in for regular custodian Barry McParland, who was injured in the lead up to the final.

“Kevy was super. He only really got the call last night. Barry was touch and go the whole way through the week and last night he said he just wouldn’t be fit. But Kevy was unreal, he pulled off some brilliant saves for us.

“The boys were all first class there though.

“That was the first time our back four played together but everybody was super, including the subs that came on.

“We’ll enjoy it, we’ve no game now until the new year, so we’ll regroup and hopefully get a new manager on board in for the New Year.”