McAree has a 'Point' to prove 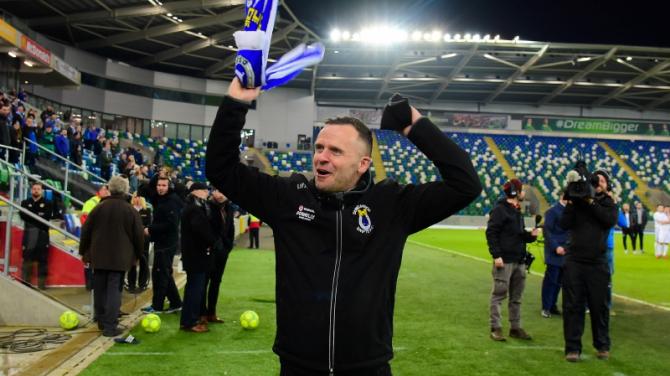 WARRENPOINT Town FC have a new head coach – Dungannon native Rodney McAree who, as a young player, spent four years with Liverpool where he was a Reserve team regular.

In his time at Anfield under the tutelage of Liverpool legends Kenny Dalglish and Graeme Souness, McAree trained and played alongside some of the best-known names in English football in the late 1980s and early ’90s..

When the Reds released him, he was signed by Bristol City with whom he spent a couple of seasons before joining fourth-tier Fulham. And he duly earned a place in the Craven Cottage club’s annuls by scoring the goal which finally clinched promotion from lowest echelon of the Football League and began their fresh ascent of English football’s tricky ladder/.

But although it was glorious, McAree’s time with Fulham was brief, for when then-Harrods owner, Mohamed Al Fayed, bought the up-graded London outfit, he promptly signed 12 players. And that signalled the end of the Ulsterman’s involvement with the club whose famous home is on the banks of the Thames.

Now 46, Warrenpoint’s new head coach is steeped in football, for his father is Joe McAree MBE, a man whose name is synonymous with the game in Northern Ireland by virtue of the phenomenal part he played in building Dungannon Swifts into a Premiership club.

The County Tyrone men’s McAree Senior-inspired growth and development on and off the pitch was part of the newcomer’s all-important upbringing, for McAree Junior grew up surrounded by football and game-related talk about ‘the beautiful game’. Put simply, there is football in every fibre of his being.

As well as that, he and Warrenpoint’s General Manager Barry Gray go back a long way. Gray explained, “I know him personally; we did our badges together, so he ticks a lot of boxes.”

He continued, “He has been 10 years-plus as a manager in the Irish League, has his pro-licence and is a qualified coach. As well as being very experienced he’s very hungry to get back into the game. The bottom line is that he knows this league inside out and that can only be beneficial for us.”

When, via their club website, the ’Point announced his recruitment on Thursday night, they confirmed that the appointment was “with immediate effect”.

Highlighting his new colleague’s football pedigree and credentials - which as well as having been a promising Liverpool starlet, Bristol City regular and Fulham legend include him having managed Dungannon Swifts and Coleraine - Gray emphasised McAree’s vast experience as a former full-time professional in England and an Irish Premier League-level player, manager and coach.

“His knowledge and experience will be massive to me as we move forward with our preparations and progression with the new panel,” Gray added.

With McAree’s last managerial job at the Coleraine Showgrounds having ended in disappointment following a mutual agreement to part company, his willingness to get back into the figurative saddle is suggestive of someone determined to restore his reputation in the game he loves.

And whilst, with the benefit of hindsight, taking over the then-high-flying Bannsiders may perhaps have been a step too far and too early, his record with Dungannon prior to that provided ample evidence of his ability to deliver results. To that end, head coach of Warrenpoint Town may be just the right job at this stage – for both parties.

He succeeds the now-departed Robert McQuillan whose role at Milltown was praised by Gray who said, “Robert has played a vital part through the first team transformation over the last 12+ months.”