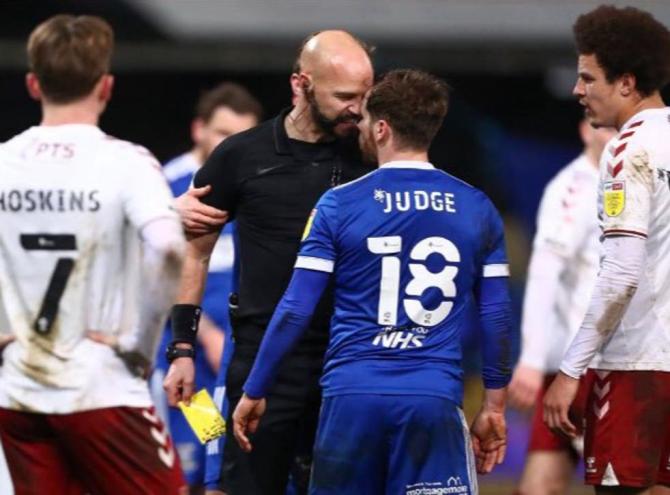 It would maybe be irresponsible to hail him as a hero, but this column certainly won’t be condemning football referee Darren Drysdale for squaring up to a player last month.

If anyone missed the incident, Drysdale seemed to physically face down Ipswich player Alan Judge during their match against Northampton a few weeks ago.

The 50-year-old whistler is an opposing physical specimen who you imagine quite a few players wouldn’t want to pick an actual fight with if push came to shove.

Of course, the law of the jungle can’t apply on a football field and those tasked with keeping players in order must maintain discipline themselves and not be drawn into altercations.

So, it was inevitable there would be consequences for the actions of Drysdale, who was hit with an FA improper conduct charge and hasn’t been assigned a game since.

However, referees are only human, so it is surprising that they don’t react more often in the face of disrespectful players invading their personal space when objecting to decisions.

Bad behaviour from footballers towards match officials has been tolerated for far too long, with players crowding round referees and dishing out unacceptable abuse.

You don’t need to be a trained lip-reader to pick up on the industrial language used a lot of the time or understand why football referees can’t wear mics like their rugby counterparts.

One accepts that passions are running high with so much at stake, anybody’s behaviour can boil over in the heat of the moment and referees are far from fallible in their decision-making.

Some officials don’t help themselves by adopting a high-handed manner and every code may have a few whistlers who have an annoying sense of their own importance.

By contrast, others have a great rapport with players without losing authority and that ability to banter at other times can help defuse situations when tempers do boil over.

However, what distinguishes rugby from football for example is that the players routinely treat referees with great respect and the exceptions tend to be highlighted and punished.

Rugby matches are exceptionally physical contests in which players put their bodies on the line, yet they can refrain from haranguing generally smaller refs and arguing the toss.

Strictly speaking, only the captain is entitled to interact with the referee in terms of seeking explanations for decisions and that helps keep dialogue more orderly and effective.

It does away with the physical clutter of players surrounding referees and facilitates a good two-way communication channel which can be beneficial to both parties.

At the top level, through wearing microphones and being expected to liaise with captains, rugby referees are actually more accountable than their hassled football counterparts.

However, the onus is on captains to use the interactions to good effect for their teams while some of the hotter heads in the ranks keep an advisable distance from the officials.

Admittedly, the model of captain communications may not work as well in football or gaelic with players more spaced out on the field and fewer natural stoppages in play.

At the interval of last week’s Six Nations match in Cardiff, the BBC carried an interview with recently retired Welsh whistler Nigel Owens, who has been one of the best in the business.

The highly popular Owens reflected with pride on how positive his experiences, as an openly gay man, have been within what might be seen as a macho and socially conservative sport.

Likewise, Limerick woman Joy Neville has established herself as a well-liked and greatly respected professional rugby referee regardless of her gender or, as it happens, sexuality.

You wonder whether, in spite of their officiating excellence, Neville or Owens would have thrived as well in football, or faced more hostility both on the field and from the stands.

Some people may point out that there are social differences between the sports and that football can’t be expected to mirror rugby’s standards of conduct, but that’s an easy excuse.

In fact, it’s insulting to working-class people in general that the authorities seem to accept allowances must be made for footballers and fans alike to act like savages if they wish.

Huge numbers of thoroughly decent, respectable people follow football yet supporters are routinely segregated just in case some hooligans get in and feel like attacking each other.

Likewise, referees just seem to suck up unacceptable conduct from players either because it’s just so common now, or because they fear the powers-that-be wouldn’t back them up.

Rather than us secretly cheering on Drysdale for, almost literally, pushing back, it would be better to see some referee taking a stand and dealing with dissent by dishing out cards.

If a few matches had to abandoned as a result of too few players being left on the pitch, there would be uproar, but otherwise we’re accepting abuse of officials can’t be tackled.

We don’t know what exactly caused Drysdale to lose his cool but, to be fair to the player on the receiving end, Judge made clear he didn’t want the official to be punished.

The then Ipswich manager Paul Lambert bleated about it however, in spite of people in his profession often failing to set a good example even though they aren’t in the heat of battle.

This writer was fortunate enough to get an interview with Steven Gerrard when he was a young Liverpool captain many years ago and found him to be both courteous and likeable.

Even this Manchester United fan readily acknowledges he was a great footballer, and now Gerrard has done a pretty good job as a manager, transforming the fortunes of Rangers.

However, the Ibrox boss let himself down with his embarrassing behaviour last weekend and his team’s imminent title triumph shouldn’t stop appropriate sanctions being applied.