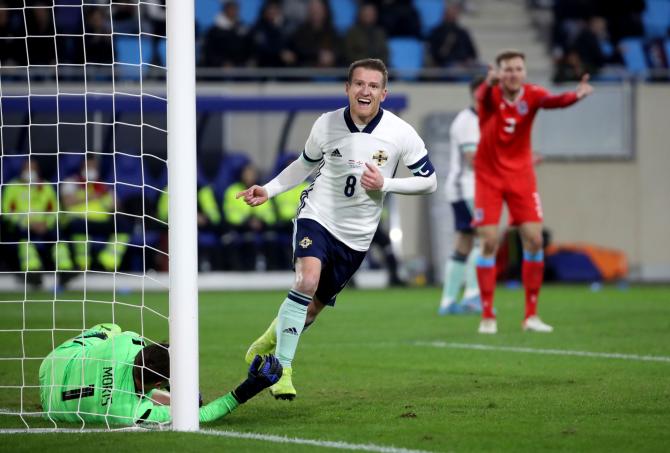 Northern Ireland have got their international week off to the best possible start with a win away to Luxembourg.

Goals from Josh Magennis, Steven Davis and Gavin Whyte did the job for the visitors, surviving a scare when Marvin Martins levelled the scores.

After the game Ian Baraclough said that he had "mixed" feelings about how his team had played.

"We certainly weren't our best," he said.

"We were solid at the back. It's frustrating when you concede a goal from a set piece."

A short time later Corry Evans' curling effort was parried away by Anthony Moris while at the other end Huddersfield's Daniel Sinani went close for the hosts.

The deadlock was broken on 16 minutes when Josh Magennis did well to dispossess Maxime Chanot down the right wing, cutting inside before finishing well with his left foot.

But Luxembourg levelled just before the hour mark when a corner was flicked into the path of Marvin Martins. The defender was left unmarked in the box and he made no mistake from close range.

Ian Baraclough rang the changes midway through the second half and it was three of those subs who combined to put Northern Ireland in front. Niall McGinn's low pass was knocked back to the evergreen Steven Davis to tap in.

Gavin Whyte took advantage of indecisiveness in the Luxembourg defence to double Northern Ireland's lead five minutes from time, bearing down on goal before slotting under Moris.

Hungary come to Windsor Park on Tuesday night to take on Northern Ireland in another friendly, kick off 7.45pm.