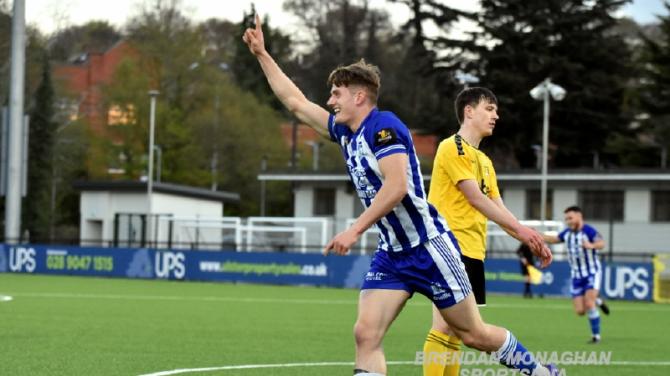 By Steve Malone at Blanchflower Stadium

NEWRY CITY AFC will be playing Irish Premiership football next season unless they fail to win their next two games and Annagh can overturn a 15 goals difference.

The Newry side are virtually promoted following their impressive win against H&W Welders at the magnificent Blanchflower Stadium and it is a fantastic achievement for manager Darren Mullen and his players. But the City boss insists that he wants his side to beat Ballinamallard on Saturday (April 23) at 3pm, to confirm their place as Lough 41 Championship champions.

“We have to go and get a win, we know no different, as a coach that has always been my mantra - to go and win the game. We will do that as far as I am concerned, we will go to Ballinamallard on Saturday to officially win the league title,” Mullen said.

“I know goal difference comes into it now and it would take a massive turnround but for me personally until it is sealed and delivered, we have won nothing yet.

“I would rather be going knowing that we need to win on Saturday to win the league title and that is something to be excited about. The players know the importance of the game on Saturday, they will be up for it. I have said it before they are a great bunch of lads, even when we were getting beat. Winning league titles is never easy, especially in this division, nobody ever gives it to you and there will always be ups and downs and it is all about who can remain the most consistent and hold their nerve and thankfully we have done that.”

Played on Tuesday night in the splendid council provided facility in Belfast, the artificial surface suited a footballing side such as Newry and from the outset they showed their intent.

John McGovern and Lorcan Forde were causing havoc in the Welders defence, nothing was getting past Odhran Casey, who was immense, while Philip Donnelly and Thomas Lockhart were superb in the middle too, with Daniel Hughes ensuring City stayed on the front foot.

Goals came from John McGovern, Philip Donnelly and a second half header from captain Darren King.

With Stephen Moan bombing down the right side, Newry created multiple scoring chances. Forde kicked into the keeper, Hughes dragged his effort low past the far post and Lockhart let fly with a couple of off-target shots.

But it came as no surprise when Newry did make the breakthrough on 27 minutes, Forde threaded a pass in front of goal to McGovern who lost his footing but kneeling down, he somehow steered the ball into the net, for a stunning goal.

The game was 33 minutes old before Welders had their first effort with Michael McLellan blasting over the stand. However, minutes later he was in at goal and it took an intelligent John Boyle sliding block to deny the chance.

Newry doubled their lead before the break with the lively Donnelly tapping home after Hughes shot took a deflection and in the second half Newry bossed the game. Forde couldn’t quite connect to Hughes’ inviting cross. King had his shot saved by the keeper but on 49 minutes he headed home at the back post from Lockhart’s corner.

It was game set and match and Newry controlled the last 40 minutes, with the bench being almost emptied and manager Mullen was pleased.

“That was a comprehensive victory we played like what we are capable of. That was the disappointment of Saturday, we know we can play a lot better and we did,” Mullen said.

We went out from the first minute, we were dominant, we controlled the game well and we were well worth our 3-0 victory. We managed the game and everybody played their part. The message before the game was to calm down and settle because when you are going for a league title and you get beat 2-0 at home it is very easy for panic to set in and you could see even the fans on Saturday there was a bit of nervousness and it is my job to make sure that doesn’t filter through to the players.

“So, the message was to calm down, play football and we were the best team in the league all year, just go out and prove it and they did.”

It was disappointment for Warrenpoint Town as despite Alan O’Sullivan’s winner against Ballymena United on Tuesday night, they were relegated from the Dankse Bank Championship as Portadown finished 0-0 against Dungannon Swifts.