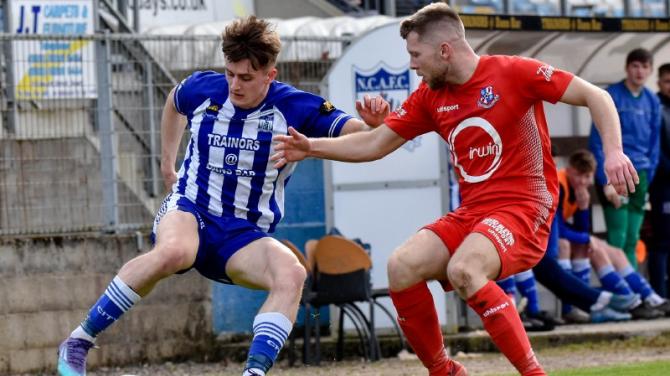 DARREN Mullen says he is hopeful he can hold on to his young talented players as they prepare for the Irish Premiership next season, writes Steve Malone.

Ballyholland lad John McGovern is an Northern Ireland U21 international footballer, while Crossmaglen teenager James Teelan has also caught the eye, especially earlier this season and Mullen is confident that staying with Newry is best for the young footballers.

“That comes with the territory, when you are winning league titles and playing well people want your players, they have been doing well,” Mullen said.

“We have had good discussions with the lads and I am hopeful that they stay because when you have young players going into the Premiership you want to go in and bed themselves in. If they stay at Newry, they are getting room to grow and more importantly room to make mistakes. If you go to a big club and you make mistakes and don’t hit the ground running, that can knock you back.”

Mullen says that his young players will continue to get first team football at Newry next season and he has always backed the young local players and nor will he hold them back when the time comes to move on.

“John knows he is in a good place and the same with James and a couple of other lads,” said Mullen. “It is a good place for young lads, we had seven U21 in our team when we played Ards last month, so young players will get a chance at Newry.

“If you are good enough then age doesn’t matter, John has come in at 16 and we have turned him into an U21 international, so hopefully he stays with us for another year and if he goes on to bigger and better things then there will be nobody prouder than myself.”