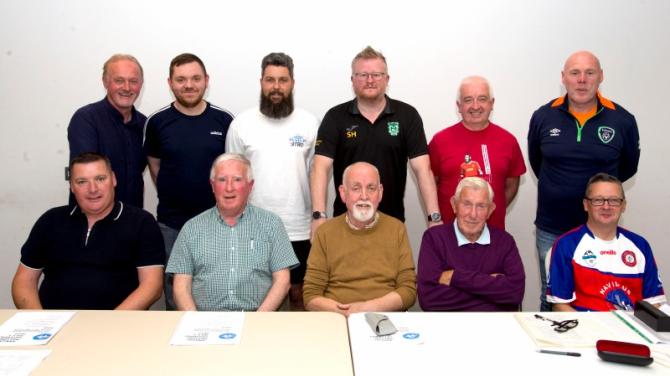 CHAIRMAN of the Carnbane Football League, Niall Quinn chaired the 54th annual general meeting of the Newry league in the Newry Leisure Centre on Saturday.

It was year since 2019 that the league completed its programme and this season saw Cleary Celtic make history.

“For the first time since 2019 we enjoyed a full season of football although the Covid Pandemic is still very much with us and in this respect all the clubs are to be sincerely thanked on helping to keep the programme going as best as they could each week,” said Quinn.

“My thanks goes to the members of our Management Committee who kept football going throughout the season, especially Edward Madigan, the Referees’ Convenor and Brian Naughton the Communications and Registrations Secretary.

Also to Mr Conor Haughey of the Newry Mourne and Down District Council and his Staff for their great help in preparing the fields for the playing of our games.

Volunteers gave the Committee a much needed boost

LONG serving League secretary Jimmy Davis said that the influx of volunteers gave the Carnbane Committee a much needed boost and he thanked members but stated that the number of teams can not afford to drop.

“I wish to sincerely thank each member of the Management Committee on the part they played during the past season (whether large or small) to make our League one of the best in the country,” said Davis.

“Our problem is that each of our two Divisions are not too big club-wise and we sincerely hope that the club membership either remains the same or added to for the coming season; also that our management Committee also remains static or added to at this meeting or in the coming weeks.”

Looking back on an enjoyable and historic season

The 2021-22 season commenced in early August with four of Carnbane’s teams playing in the Mid-Ulster FA’s Kennedy Cup, and it was Killeavy United who excelled themselves by reaching the grand final only to fall 3-1 to a very strong Rathfriland team.

The six teams that participated in the Irish Junior Cup had no luck at all and they were all out of the competition by the time the third round was reached.

It was a different story in the Mid-Ulster Shield competition, and Millburn United and Cleary Celtic qualified in style to reach the semi-finals. Millburn United were unlucky to fall to Portadown BBOB, but Cleary powered their way into the final to defeat the Ports and bring the elusive trophy back to Newry.

It was now clear that Cleary Celtic were on a record winning season and after winning the Kehoe Cars Bessbrook Cup before a record attendance at the Newry City Showgrounds at the expense of Villa Rovers. The final was played on a lovely summer’s night and was very competitive throughout

One of the features of the game was that it attracted many young people, and this really augurs well for the future of Carnbane football

Cleary Celtic, managed by John Hogg, went on to win the Fr. Davies Cup and they also created a new historic chapter in the Carnbane League by becoming the first team to win five trophies in the one season when they also annexed the Newry AOH Cup at the expense of a gallant Dunnaman team from Kilkeel.

In the First Division of the League it proved to be an exciting tussle all the way from start to finish. Early on Millburn United looked the part of champions, and new team, Church Street FC were also very impressive.

However, after dropping their opening four games, it was Cartwheel United of Crossmaglen, who improved as the season continued and they in the end deservedly won the title in their final game of the campaign at the expense of Greenfield Park before a very large attendance of fans at Jennings Park.

Greenfield Park in turn defeated Church Street in a play-off game to take the runners-up position and secure promotion to the Premier Division for next season.

Eddie and the Carnbane League made history

Edward Madigan, who was appointed as the Referees’ Convenor, organised the referees into a strong group. The Management Committee supported him and it also sponsored the affiliation fees of all the referees for the season.

Eddie was in charge of the referee appointments for the whole season and to his credit all the games were covered. Not only that, but he also made football history for the Carnbane League by obtaining sponsorship to equip the referees with new inscribed uniforms, and flags, etc. So through Eddie the Carnbane League is the first football League in Ireland to have sponsorship for its referees.

Rodney Kimbley along with Declan Sloan, both of whom have been members of the committee for a number of years organised the league’s finances during the season and they did a marvellous job.

In addition, Rodney (on his own) organised the entire Carnbane Youth League brilliantly and he is to be thoroughly congratulated on his excellent achievements in keeping Carnbane at the helm of youth football.

Referee of the Year award sponsored by Ian Ryan.