Mourne derby tonight at The Showgrounds 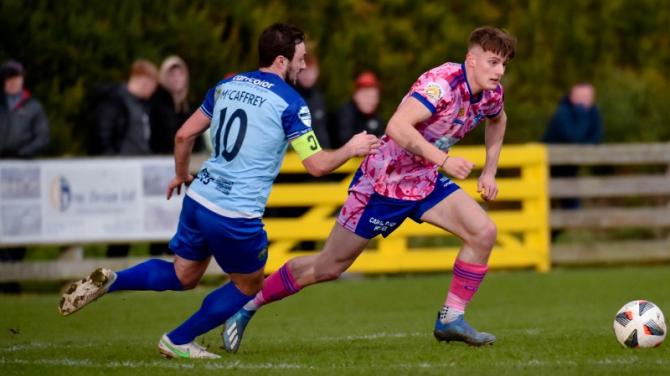 NEWRY City and Warrenpoint Town face each other tonight (Tuesday) at The Showgrounds with a 7.45pm kick-off.

It's the annual pre-season contest, which usually provides a decent game of football.

Darren Mullen has been wheeling and dealing ahead of the start of the Dankse Bank Premiership on Saturday, August 13.

They have lost Odhran Casey, which is a blow, who returns to Cliftonville, from where he was on loan from, but Donal Rocks has joined from the Reds in another loan deal.

“This is a signing we have been working on for a while,” said Darren Mullen.

“I spoke to Paddy McLoughlin [Cliftonville manager] earlier in the summer and with Donal coming back from an injury it made sense for him to go on loan. He is a player with loads of ability and has already proven himself more than capable at this level so he will be a welcome addition to the squad.”

The new signing said he was glad to getting football with Newry.

“I’m delighted to sign on loan for Newry and help the team continue to progress in the Irish premiership,” Rock said.

“We have an exciting young squad with a great manager, I’m really looking forward to meeting and playing in front of our fans.”

“The last time Andy was at the club he was a young lad with potential who needed to go and play senior football,” Mullen said.

“He comes back to us with that experience and after making it into the Premier Intermediate League Team of the Year it’s obvious he has developed into a really good centre back. It’s a position we needed reinforcing in so I’m delighted to get him signed.”

Andy said: “I am absolutely delighted to have signed for Newry City AFC, I am aware it is a big opportunity for myself to play in the NIFL Premiership. I have watched Newry over the last few seasons and seen the fan base grow which is really exciting, so I can’t wait to get going and hopefully I can hit the ground running.”

Earlier in the season, Mullen already confirmed that the majority of his players will be staying on with his side.

Young players such as Crossmaglen’s James Teelan and Ballyholland’s John McGovern will have eyes on them to see how they perform in the big league , with a view to snapping them up, but Newry will want to keep their best players. Captain Darren King, John Boyle, Stephen Moan, Daniel Hughes and Decky Carville are all players who have played at the top flight before and possess bags of experience .

Odhran Casey going back to the Reds is no surprise but it is a huge dent in a team that needs to build on last season. He is a wonderful talent and will be missed at the Showgrounds.

Warrenpoint Town face Loughgall in the opening day of the Championship and have a busy run of games ahead of that. They face Larne on Thursday (July 28) in Milltown at 7.45pm Cliftonville come to Milltown on Saturday (July 30) at 3pm, Point make the trip to Distillery the following Tuesday before welcoming Carrick Rangers to the Point on Saturday, August 6.

Town manager Barry Gray got much of his business done early in pre-season, with 29-year-old midfielder Jim O'Hanlon, 22-year-old central defender James Carroll from Drogheda, Luke Walsh another defender, as well as local lad Adam Carroll a striker, who was with Linfield and most recently goalkeeper Lewis Deane who played 35 games of championship side Knockbreda last season.

Tonight's game will be a good chance for both managers get a look at new players and for all the players to get some game-time into their legs.